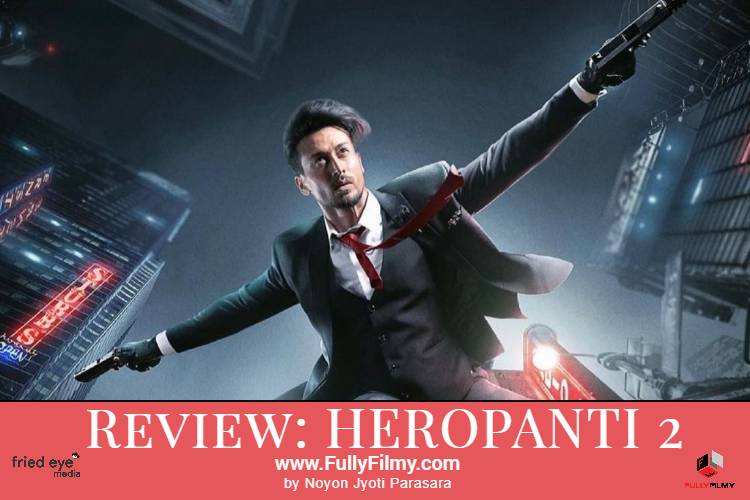 “You have to commit to it; believe in it. If you don’t believe in what you are trying to sell, how will the buyers believe it?” one of my previous bosses had once told me. I was put in charge of selling ad space for a site at a price that was much higher than what a rival site was selling. And we did not have the numbers to back it. Needless to say, I was not convinced. But there was an important lesson to learn. You cannot always have control over what you are selling, but you would have to sell it nonetheless.

That last sentence in no way justifies Heropanti 2. Director Ahmed Khan and producer Sajid Nadiadwala has complete control of what they were trying to sell. They could have chosen to make it a more interesting deal. Albeit…

Heropati 2 is a mess. A mess that the makers believe is entertaining. Their intent was possibly to somewhere make a film akin to the ‘80s Jackie Chan action thrillers, that were infused with comedy. They get the closest actor we have in Bollywood to pull something like that off – Tiger Shroff. Young, good-looking, can make action sequence look like a class in acrobatics… and while doing that could also romance a girl. Because what’s an Indian mainstream film without some romance and naach gaana!

Ideally, they would have needed a script. But when you have an actor that can give you the mid-air splits as you go slow-mo on action sequences, who needs the script! To sweeten the deal, there is a girl – Tara Sutaria – who shifts from an English-speaking snoot someone to mouthing abuses in Punjabi accented Hindi… not to forget can look a million bucks and look off utterly bizarre costumes. And the joker of the pack of cards – Nawazuddin Siddiqui, who plays a gifted magician named Laila but with Mogambo-like intentions. There, you have a package. A ‘project’ as some in Bollywood would like to term it. So, for a script, there are action sequences planned with some elaborately choreographed songs in between. They get the Mozart of Madras on board to add value. Sprinkle some comic scenes. And hey, don’t forget a dose of deshbhakti and maa ka mamta. There, perfect! This could put the average Mithun Chakraborty film from ’90s to shame.

And that brings backs us back to the corporate lessons. You got to believe in what you sell. And I am assuming both the director and producer and the cast did believe in it to be able to make something like this.

Had Heropanti 2 been released a few years back, it could have been a perfect motivational movie for me. Maybe my then boss could have even sponsored a ticket. Team development, you know. I could do with such levels of conviction even when I know what I am doing is absolutely stupid.

Case Study 101: Lessons that could be learned from a Bollywood movie.

Heropanti 2 is available on Amazon Prime