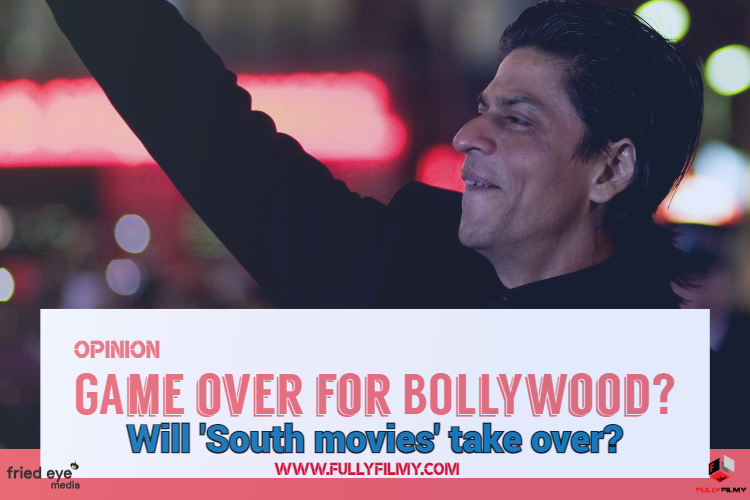 Debunking the “remakewood” allegations and more.

“Bollywood is over. It’s now merely remakewood. South movies are taking over,” announced a fellow journalist. This in-between a discussion after the fabulous success story that Pushpa The Rise went on to be and the subsequent failure of Kabir Khan’s magnum opus 83.

My friend is not alone. I have observed a growing sense of resentment online, on various social media pages, ridiculing what was once one of the world’s most loved movie-making industries. A lot of this may have found strength after the demise of Sushant Singh Rajput and the hysteria that followed. A meaningless tirade that continues till this date, blaming everything and everyone for the actor’s death.

Of course, the concerns are not unfounded. There are good reasons why people believe it’s the endgame for ‘Bollywood’. But it’s also something I have found absolutely preposterous.

While I could not be happier that the movies made in the four south Indian languages gain prominence, we seem to be too eager to summarise the rise as the end of the Hindi film industry. We are a country of 1.4 billion people, a burgeoning middle class, an economy that is touted to grow at 8.5 percent in the coming year, and theatres looking at moving out of the deadly covid scare – all great indicators that there is enough space for eyes for all kind of movies.

It is quite absurd to conclude that the rise of one of the Indian industries will bump off another. Well, at least not the biggest one. Not when the Hindi film industry is still making movies like Sooyavanshi, which was released just a couple of months before 83 and did some stellar business. But then mass memory seems to have conveniently overlooked the success of that film.

Also in the time between releases of Baahubali, KFG, and Pushpa, there have been umpteen of releases in the four southern languages. Did all of them do similar business? Baahubali-fame Prabhas’s Saaho was pronounced a flop.

So, is Bollywood only making remakes? A good way to analyse this would be to look at data. Let’s list work done by the most followed Bollywood actors in the last 5 years. [Taking actors who are alive]

The table should provide a clear picture. Out of nearly 200 movies that starred these actors, barely 10 were remakes – including remakes of older Hindi and Hollywood movies. A fairly larger number has been of films made on real-life events or people.

And of course, there are the movies such as Andhadhun and Pink that have been remade in the south Indian languages and have done fantastic business. The four south Indian industries in the meantime have a free-flow of movie rights, one industry remaking another’s hit quite frequently but never quite getting the criticism that Bollywood seems to get. Soft target?

Playing devil’s advocate, why are remakes such a bad idea? Not everyone watches content in another language – not in a country as diverse as ours. So, if a story reaches out to a different set of audiences through another language it is indeed a great service to the story itself and to the audiences. It would be great to see remakes of movies like The Great Indian Kitchen so that the story can reach out to a larger audience and thereby multiplying its impact.

The success of dubs like Pushpa only helps. Because this takes out the production expense! Some producers have shown their prudence in releasing dubbed films rather than remaking them. That does not mean he will stop producing Hindi films!

Also, this is not to claim that Bollywood has been at its best in the last few years. Frankly, barely a dozen movies out of those 200 could actually stand the test of time. The bankruptcy of stories and decent screenplays is stark. But that’s always been how the industry has worked. The focus has been on the business and less on creativity and experiments. Stuff that you know should change, but have no realistic roadmap considering the industry is run on private funds – people expecting returns on every investment. And the tested formula is always safer.

And yet, I don’t think that could destroy the industry. Not like the way Covid 19 pandemic has. Today the industry is reeling due to a crisis that has not been caused by a lack of story or screenplay, but because of the lack of cash flow. The largest source of revenue – the theatres – have been fractured. Movies are being released in theatres that run at 50 percent occupancy.

Add to that the single screen theatre facing extinction. Between 2010 to 2019 over 3000 single screens shut down across the country. That includes the iconic Chandan cinema in Mumbai! But Covid 19 has sent them completely out of business. An estimated 2000 screens may have shut down since the first lockdown was announced in March 2020. Much of this number happens to be single screens. Multiplexes too are facing the heat, especially ones that aren’t run by large groups. Thankfully chains like PVR continue to remain positive on the growth story given we are far behind China in the number of people to screen ratio.

Amidst the darkness, a ray of light has been provided by the growth in revenues from streaming platforms. Many of the movies listed in the table above found audience through platforms like Netflix, Amazon Prime, and ZEE5. Released as Originals, like in the case of movies like Gunjan Saxena, Bob Biswas, Gulabo Sitaabo, these deals have helped producers recover the costs. These platforms have also helped discount risks for producers by some margins. But will they ever manage to replace the business the theatre generates? Long shot!

One more phenomenon has been an absolute misunderstanding of the OTT phenomenon.

The growth in digital consumption has allowed platforms to experiment with content forms and structure, as well as the cast. They have made possible the growth of a new category of stars – actors who would have not commanded much attention at the theatres. And as they get popular, they also seem to be hiking their prices and thereby increasing the cost of the content to unsustainable levels. Driven by the need to have enough content to retain their subscribers, OTT platforms may have agreed to costs that should have never been. But as the market matures and moves towards consolidation there is bound to be a stricter look into budgets and the recoveries. Sooner than later streaming platforms will have to look at returns on each piece of content if they have to move towards profitability. It would be insane to expect platforms to keep buying content at prices that they are never likely to earn back. And that would not be too different from how the film business has worked to date – revenue-centric.

Not to forget, piracy still exists. Our countrymen have found reasons to pirate movies like Dil Bechara despite being offered absolutely free of cost for viewers by DisneyPlus. There have also been instances like Mimi, when Netflix was forced to release the movie ahead of the scheduled date after the film found its way to torrent sites.

When a person puts in money, he expects returns. When a company puts in money, shareholders expect returns. Returns in cash, not kind. Unless the money is put in for philanthropic purposes. Movies are seldom made for philanthropy. They are made as a business and consumed for entertainment. Entertainment, not cultural awakening or life lessons. If I am not okay spending my money for the cause of art, it would be foolish to expect someone else to do it.

Could the government step in then? It already has the NFDC, which was meant to promote new talents and good stories. It also runs the Film Bazaar, a marketplace. But the report card of NFDC in the last two decades barely has anything to talk about. In 2021, the NFDC approved 5 films – the fate of which is unknown.

More importantly, it would be dangerous for the government to control the movie industry. A medium that impacts in such ways should never be allowed to be ruled by the ruling dispensation lest it is used as the most potent tool of propaganda. We can never trust a government

Irrespective of the tough days, the movie business should move towards a new normalcy. And that includes Bollywood. Certainly, a large section of the audience would have found convenience in watching content on the mobile and TV screen – much like how the audience had found piracy during the ‘80s and ‘90s. But the magic of the big screen, the experience of watching a movie along with hundred others is hard to forget. And collections of movies released amidst the pandemic speak loud enough – people will go back to the theatres – for Bollywood, Hollywood, or any other ‘wood’. And no, Bollywood would not be dying. To spell doom for the industry after a couple of failures is akin to a rookie trader at the stock market calling it quits after one bad session of trading. My friends, the market crashes and rises again. It never stops existing!

And finally, never forget that the Hindi film industry has evolved and changed strategy through the decades. From mirroring social issues to going full disco in the ‘80s to creating something that was named ‘multiple movies’, the industry has evolved to cater to the demands of the viewers. I will bet my money on it.