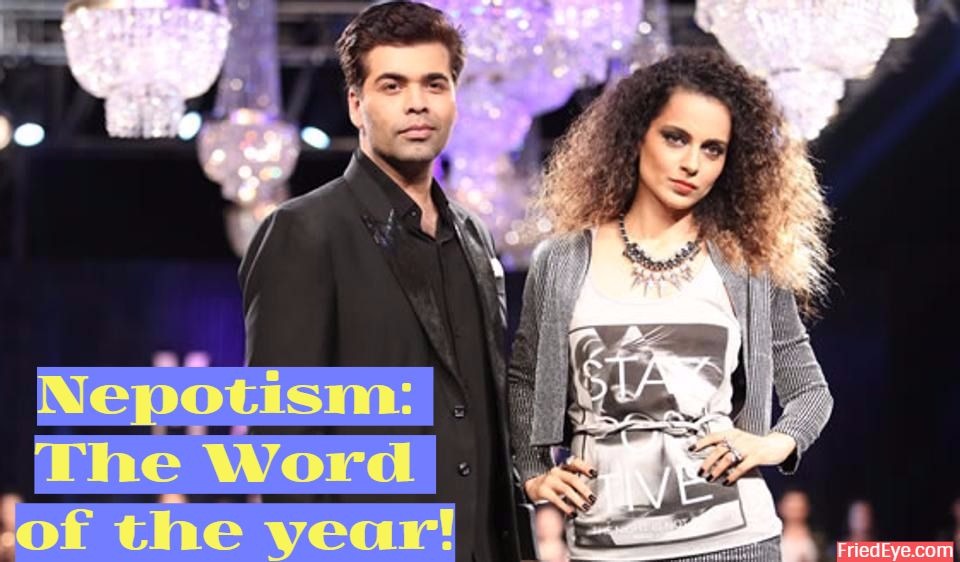 Nepotism has got to be the word of the year. Thanks to Kangana Ranaut. It has never been a secret, nepotism in Bollywood. The Kapoor family is into the fourth generation, and will probably go into many more… The filmy kids get a break. Even Mimoh Chakraborty did. And though I have nothing against the boy (he is a rather sweet chap), he too would probably understand that he does not quite have what it takes to be an actor.

Yet, I find Kangana’s rants against nepotism rather misplaced. It would have made far more sense if the rants came from someone else… for example an Arjan Bajwa. The good-looking actor had romanced Priyanka Chopra in a film a few years back [The same film had got Kangana a National Award for Best Supporting Actress]. And yet, despite his looks and acting credentials, Arjan has had quite a tough time finding roles in the Hindi film industry. Kangana, on the other hand, has had a trajectory like most of her female counterparts. She was introduced by Vishesh Films, went on to work in movies produced by Dharma Productions, Excel Entertainment, Phantom, and Balaji – some of the biggest names in the industry. That she has not worked with actors the three Khans is entirely her call. She was, in fact, offered Sultan with Salman Khan, which she chose to turn down. Likewise, she has also chosen to do films like Rajjo and the Chirag Paswan starrer Miley Naa Miley Hum, evidently solely for the money that was on offer – thereby exploiting her star status. That is something probably actors like Deepika, Anushka and Vidya Balan would stay away from. These actresses, like Kangana, have come from outside the industry and made it big. One look at the ‘A-list’ and you will see that Alia Bhatt is probably the only actress in the top bracket who got a launch because of her surname. Interestingly she is probably the best talent we have in the industry today.

In the meantime, I remember Arjan Bajwa once candidly telling me how disappointed he feels because he is almost always offered the second guy in the film. Case in point – Son of Sardaar, Rustom and Bobby Jasoos. He is not alone. Despite the fact that we have a Ranveer Singh and a Siddharth Malhotra doing well today, a majority of the new generation of male actors were born into the industry. Ranbir Kapoor, Varun Dhawan, Tiger Shroff, Arjun Kapoor… even Harshvardhan Kapoor. Things were probably better till a couple of decades back when actors like Shah Rukh Khan, Akshay Kumar managed to make it big.

Having said that, it would be fallacy to believe that Bollywood believes in giving breaks to only star kids. For every Ranbir Kapoor there are multiple Arjan Bajwas. Every year there are at least a dozen debutants in various movies made in Bollywood. Of course, these are all small budget films, most of which sink without a trace. The common moviegoer might not even get to know of these films as the media does not write about them and neither do they get proper releases. And you cannot blame the media for not writing about these newcomers. Why should a journalist after all waste time and news space on a story that will in all probability be skipped by the reader? And neither does the regular moviegoer buy a ticket for movies which toplined by new actors, unless the new actor is a star kid. Saawariya, despite its bad reviews, had managed a Rs 11 crore first-weekend collection of Rs 11 crore – a figure a Rajkummar Rao films still struggles to reach (Behen Hogi Teri did a lifetime collection of little over Rs 2 crore).

The fact of the matter is that filmmaking is a business. A business which is huge rides on the male lead in Bollywood as well as Hollywood. Movies are not made from money collected from government taxes. They are made by a producer, entirely at his/her own risk. There have been instances when producers have sold properties to make films and ended up losing everything they have. And when a producer is risking his own money he has the right to decide who he wants to cast in his film. And he if chooses to give a break to a star kid, that’s more because the star kid would at least generate some amount of pre-release buzz – enough to tell people that a film is releasing. How many of you guys know of a film called Fuddu that released in October 2016? The film introduced two promising newcomers – Shubham and Swati Kapoor – none of who have been seen ever since. And this despite the fact that it was a decent film. The film obviously did not recover any of the investment.

If numbers are anything to go by, talent evidently plays a large part in success. Rajkummar Rao is a fantastic example of the same. The actor just delivered a Newton, which has not pocketed more than Rs 20 crore at the box office. If reports are true, Nawazuddin Siddiqui charges anything between Rs 3.5 crore to Rs 4 crore for a film today – that’s probably equal to what Abhishek Bachchan can afford to ask for, if not more, for a film. The success stories are few and far between, but they are inspirational enough for more talents from across the country to try their luck. Maybe in time, we will have more of such stories than stars from inside the industry.

Coming back to nepotism – I really believe it is a rather misused term in context to Bollywood. A wasted tirade. I would have focussed my energy more on ensuring the right people find jobs that help run the country. Because it is the wrong leaders that you are stuck with. It is the undeserving doctor and the dishonest public servant who got his job because his relative is a big shot that is costing the country; you may refer to this as corruption. As for the movies, you have the power to decide against watching a film that acts a star vehicle. Just don’t buy the ticket!

If performing in front of the camera is your calling, it is a choice you have to make. You could be an actor without being a hero or heroine too. Maybe that’s the change!