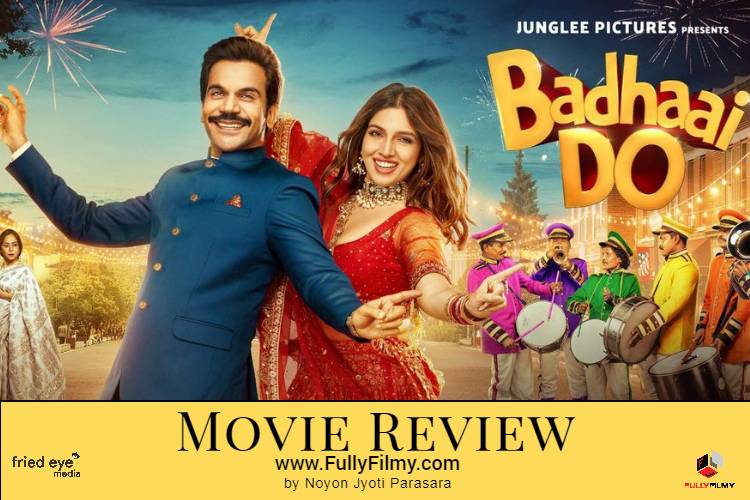 We are not there yet as a society. Not nearly there to accept homosexuality as normal. Hence every film around it is important, as much as any dialogue around it. And while films like Aligarh have managed to push the agenda, a well-made film that can reach out to a larger section of people with humour is all the more important… considering Aligarh, despite all the awards and acclaim, barely managed to draw two and a half lakh people in a country of 130 crores to the theatres. This in no way diminishes the achievement or finesse of Aligarh, but just a study of what is needed to reach a larger section of the audience. This is what Badhaai Do attempts, much like Shubh Mangal Zyada Saavdhaan. Of course, Aligarh and films like Badhaai Do deal with different facets to the problem too.

Badhaai Do is about two homosexual people, a male cop named Shardul and a female physical education teacher named Suman, deciding to get married to each other to escape the constant family pressures. Their idea is simple – get married so that the families are off their backs – and then live the lives they wish to. Simple enough indeed, compared to the life they may be confined to if they come out of their closets. A semblance of this idea was explored in Madhur Bhandarkar’s 2008 film Fashion, where a gay fashion designer played by Samir Soni marries a model to steer clear of societal pressures.

Unlike an Aligarh, which aims to sensitise the audience on the hardships of a homosexual person, Badhaai Do puts the onus on the person itself. Its core idea is to boost morale so that a person accepts his or her sexuality openly without any fear or shame. Needless to say, the most powerful scene in the movie, one that has the ability to choke you emotionally, is when the leads come out and accept their sexuality in front of their families… acceptability in society follows.

But this is not all that Badhaai Do actually explores. The makers actually take on a number of preconceived ideas. Including gender sensitivity and how even a gay person might come with his or her own trappings, bred by the upbringing and values that we are brought up with. Like when Suman realises that being gay does not make Shardul any less of a chauvinist, while Shardul fights with the false male pride. And to top it, Badhaai Do deals with the idea of parenthood and legal situations prevalent in the country.

The director, Harshvardhan Kulkarni uses humour as his strongest tool to drive home his point, and he does it well. But none of it would have been possible without this dream of a cast. Both Rajkummar Rao and Bhumi Pednekar deliver beautifully. The relationship is complex; it builds with time and their chemistry speaks. It is a delight to see Gulshan Devaiah and Rajkummar Rao together on the screen – two of the finest actors of this generation that Indian cinema has to office. While Gulshan enters the story much later, he adds tremendously. Chum Darang, a fresh face from the northeast portrays the Gulshan’s female counterpart – someone who believes in speaking up… she does it with aplomb. And then there is Sheeba Chaddha, in the role of Shardul’s mother, who delivers simply through expressions. It would be an injustice to not mention the rest of the ensemble cast, but that would make this far too long. I issue my apology to each of them…  Seema Pahwa, Nitish Pandey, Loveleen Mishra…

Badhaai Do comes with its faults. For one, at nearly two and half hours, it could have been shorter and crisper. The director takes his sweet time to establish his characters and to get to the second act. What one cannot fault it on is its intent. The film has its heart in the right place. And that’s reason enough for the story to reach out. Of course, the humour and the performances only add to it.

Badhaai Do is available on Netflix.