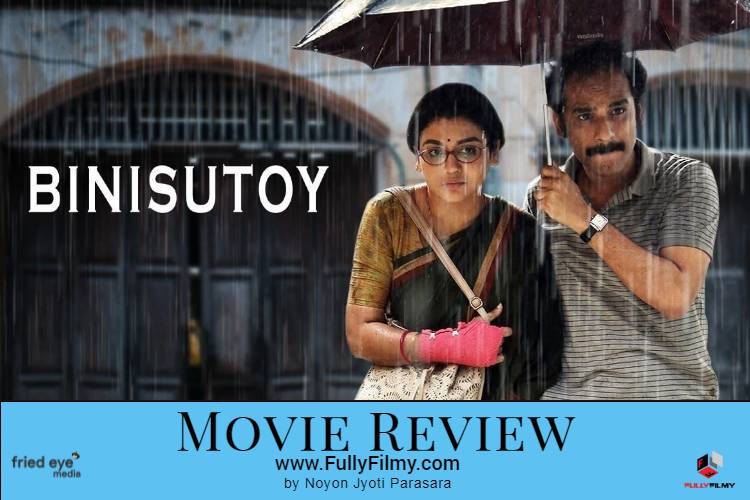 Why do we watch movies? To be entertained, of course. But it is really the stories. The stories that help us, for that brief period of time, escape the regular and be a part of something else, feel the joy or pain that the world brings with it. In a broad context, Binisutoy could be a tribute to the movies, and the stories that drive them. It talks about the importance of stories, and about life. And it’s joyful hence, that the movie manages to transport the audience into its world so effortlessly.

Binisutoy, of course, has a more pointed focus – the unbearable loneliness of the privileged life – as a character (Kheya Chattopadhyay) in the film points out through a newspaper article. This article published in The Hindu Businessline in late 2018 may have been the genesis of this story. “The pressure to project a perfect life is so high among the affluent urban Indian women that an admission of loneliness becomes an option fraught with the prospect of scandal,’ reads the subheading. Director Atanu Ghosh uses his protagonists Srabani Barua and Kajal Sarkar to communicate.

The film opens with Srabani (Jaya Ahsan) and Kajal (Ritwick Chakraborty), trying their luck at a reality show which promises Rs 50 lakh to the winner. Srabani appears to be underconfident, yet with aspirations for her 12-year-old daughter. The 50-lakh reward, she says, could help her provide the right education for her daughter and also for them to travel to distant countries. Kajal Sarkar in contrast appears far more confident. It is here that the two meet, some by luck and, what appears later, some by design. And despite their different personality, the two have more in common than what we see at first glance. They strike a conversation and share their stories with each other through the rest of the day. Srabani has to find a replacement for a broken vase, without which her daughter refuses to go to school. Kajal in the meantime needs to find Rs 50,000 of his fiancé’s money that he lost.

It is impossible to provide anything beyond this without actually giving away a fantabulous twist early in the movie that is revealed as we follow both the characters into their individual lives. So, I shall restrain. It’s here that the film loses any predictability and turns delicious.

The director’s focus is the need for companionship, more so in empty marriages. He sifts through the façade of what looks like a perfect life – endowed with family and financial stability – to reveal a void in the lives of his characters. He sets the premises in the opening frame of the movie using a Fyodor Dostoyevsky line – The mystery of human existence lies not just in staying alive, but in finding something to live for. In another scene, the director uses the Louisa May Alcott poem, “I slept, and dreamed that life was beauty; I woke, and found that life was duty.” How many times have we had conversations of ‘escaping to the Himalayas’; to escape the humdrum?

Ghosh’s attempt is provided wings by fantastic performances by his leads. Ritwick Chakraborty as Kajal Sarkar shows why could assert a claim to be one of India’s better actors in this generation. Jaya Ahsan uses lesser words and has the ability to let her expressions do the job. The two plays characters that are at different points on the same path, one four years ahead of the other. And they are perfect at it.

Cinematographer Appu Prabhakar, who Atanu Ghosh has earlier collaborated in Robibaar, plays the lights, while editor Sujoy Dutta Roy puts it all into a seamless narrative. The music adds to emotions.

Binisutoy stands as one of the more pertinent films of recent times. It is a film that people could identify with, irrespective of which point of the road they are in.  I will leave you with one of the lines that Kajal Sarkar uses in the film, “When you have no stories in life, you create your own.”

BiniSutoy is streaming on ZEE5