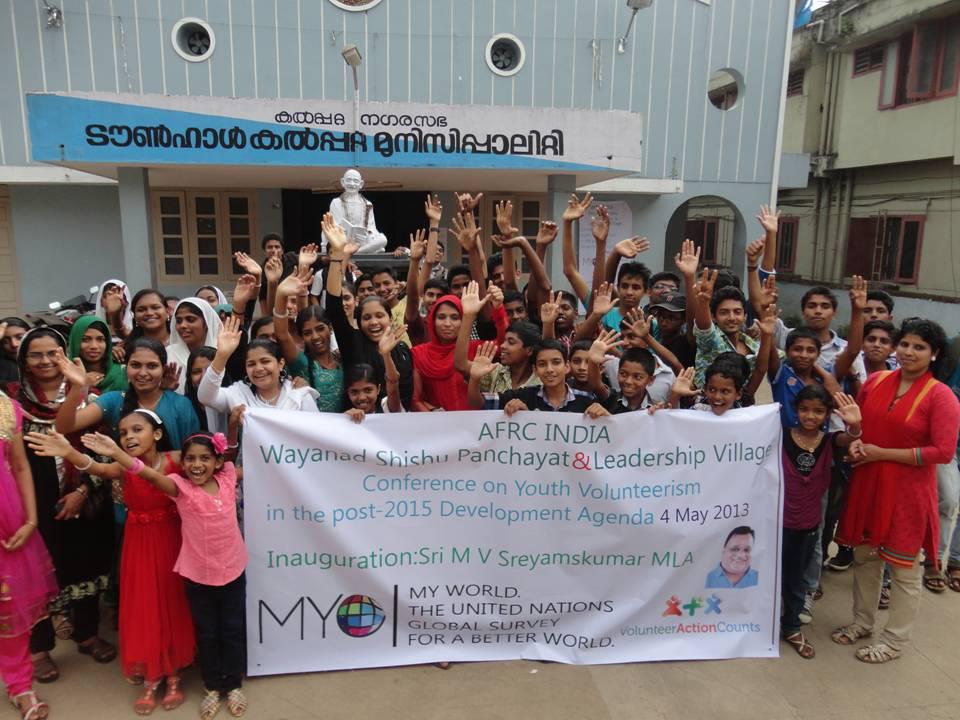 THE VALUE OF ZERO: Celebrating the Backbenchers

Empowering ‘Back Benchers’ is their mission. Be it in the classrooms or in the shady corners of society. They believe more in the special qualities of ordinary minds rather than the ordinary qualities of the brightest of minds.

Just like it takes four legs to keep a bench strong enough to carry the weight of five, it takes collective efforts to real

ise visions of a better tomorrow. Academic Forum for Research and Communication, India (AFRC), one of India`s leading rural educational organisations is all set to revolutionise the educational scenario in the country by  trying to connect different individuals and organisations from all across the world to develop special educational methodologies powerful enough to iron out the present ruffles in knowledge sharing.

Through their unique initiative ‘The BackBenchers Conference’ which recently kickstarted its second edition held at Kalpetta, the Headquarters of Wayanad district in Kerala, AFRC has played an interesting role in offering an alternative way of education to a section of people in the society, who proudly call themselves the ‘Back Benchers’. The ones who are not commonly seen in roads travelled often. The ones, who are marginalized and denied opportunities by a lopsided system, be it educational or social. The back bench represents rebellion, youth, freedom of expression and creativity. Anyone who is associated with a free spirit, who is willing to create a positive change in society which will in the long run add value to society, is a backbencher.  This year M S Swaminathan Research Foundation and Peace Gong Kerala joined the movement as well. A group of students from Tezpur University, Assam too have participated playing the roles of young leaders. One of the students of Tezpur University, Jurismita Pujari says, “Our support team from T.U has been involved as online resource persons. It was an honour to be associated with the AFRC and BackBenchers Conference and I am happy to be able to play atleast a small role for such a great cause.” Inspired by the fact that some of the world’s most successful geniuses like Steve Jobs, Albert Einstein and Mark Zuckerberg have been ‘backbenchers’ all their lives, Anil Emage and Laila Saein, two educators from Wayanad decided to challenge the ‘zero value’ of the Indian Education System which is predominantly examination oriented and neglects the inner sparks of creativity in the young. With intent to break the social psyche that academic excellence alone is the indicator of ‘success’ in the society, they started the AFRC in 1998, an open village school for children and youth who either could not afford to pay for higher studies or could not do ‘well enough’ to make it big. These students are given special training in spoken English, communication skills, basic media literacy, social skills, art and literary appreciation, farming, skill development and leadership training. Besides, AFRC has been functioning as an incubation centre for student projects with its platform ABC (Academic Business Centre) which supports the students with financial management, specialised training in concerned areas as well as with its think tank forum Living Library Circles through which they are connected with the best brains from the nation. Their project Leadership Village and its Young Leaders Program provides necessary training and exposure to the project leaders.

“In Wayanad we have an internationally competent Cricket stadium, but we do not have a university for our children and youth to study.” Says Anil Emage, founder of AFRC. “I do believe education alone can herald an overall change in our society, especially in rural India. I am doing the BackBenchers conference on an annual basis, this is the second year, so as to create a space for people who are not slaves of fame, but are dedicated and desperately want to bring the real change we all needed for nation building. I do believe instead of waiting for a mass to gather and move the mountain if each of us stoops down and lift one stone, still the work could be done.” He continued. He further said, “When Mangalayan reached its orbit safely there are still children in our villages who do not know how to read the news of it.  We still have to send an India to space all by our own technology. Sadly our girls are still raped and not safe. Child labour still is rampant. When the entire country is in the backbenches, I do believe the Backbenchers conference in Wayanad has a national significance.”

As part of AFRC, Anil and Laila have been training many students from rural schools, encouraging them and polishing them into capable leaders, many of whom have even represented AFRC in many national and international platforms. The BackBenchers Conference aims to offer a forum for innovative ideas to be shared, which can transform the education scenario across the country and globally.

“AFRC is globally connected. We have resource persons who visited and worked with us from the US, Switzerland, Germany etc. For the present BackBenchers Conference Ms. Nathalia Rollier, who is from Switzerland had been working hard to make it a big success. I organised the conference last year on an experimental basis, but the resounding success of the event made me rethink as people from all walks of life took it to their heart. I decided to make it an annual event and this time it has grown beyond my expectations and has reached the status of an international conference. We have already conducted two online workshops with our partner Radijojo Global Children`s radio network`s Global Green Kids, Germany and also another conference in Kannur with Bright College.” Explains Anil. AFRC visualises to launch the village university, perhaps the world’s first university for children, in Wayanad by 2018. Their dreams are high.

“I believe we all are created equal in this world. Nobody is small or big. Attitude and vision spells the difference. For our university we do believe we will have a space for greats like Lionel Richie, Aamir Khan, Kailash Satyarthi, Malala and village farmers from Bihar and Rajasthan. Our children will not be addicted to social media, but will be empowering society with rare deeds of volunteering and leadership. Along with text books our children will involve in farming, acts to support environment and will feed the needy and cloth the poor” concludes Laila Saein, a journalist who made a choice to be a teacher.

Three reasons why AFSPA should be extended to all of India