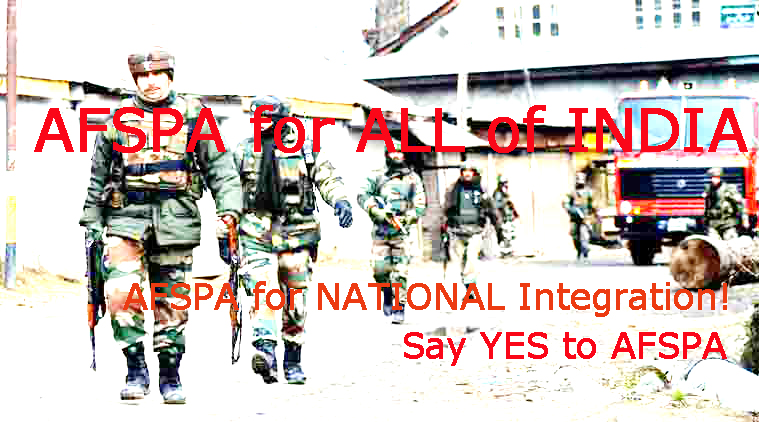 As the incident of alleged gang rape of tribal women by army men is causing unrest in the Karbi Anglong district of Assam, the Armed Forces Special Powers act has once again become the point of discussion. The act provides absolute impunity to the armed forces in the areas where it is put into enacted. It has been used as a cover by some rogue elements in the armed forces to commit massive human rights violations including rapes in the past and has always been criticized as a draconian act. However, people of the Northeast are often advised by ‘mainstream’ opinion leaders to rise above regionalism and approach the issue from a national perspective. Not supporting the AFSPA blindly, or talking about human rights violations by the Indian armed forces is anti national if we have to believe a prominent section of Delhi based journalists, politicians and strategic experts. Numerous instances like the rape and murder of Manorama Devi of Manipur are a must for national security, we are made to believe.

Now let me think from a ‘national perspective’.

Let us assume the people who regard the AFSPA as sacrosanct must be right as they are from the Indian mainstream. But the moment I rise above my narrow parochial mindset and start thinking that the AFSPA is a beautiful democratic piece of law, I feel deeply anguished that a large number of my fellow brothers and sisters in the India mainland are deprived of such a patriotic and nationalistic act. The fruits of the AFSPA, till now are tasted by people in the Northeast and J&K for decades. It is totally unfair. Since the Indian mainstream deserves to get the lions share in everything good, the AFSPA should be no exception. The masses of the rest of India should also get a first hand experience of the AFSPA. Every nationalistic and patriotic Indian, especially those from the mainland, should demand that this beautiful law should be extended to the rest of the nation. Let me explain the benefits of such a step. I have tried to enlist a few benefits of the extension of AFSPA throughout the nation. But since I don’t have a mainstream brain so I should not waste my time exerting pressure on it to discover more. However, I am totally convinced and do agree with the mainstream thinkers that this act is not undemocratic as we think but is one of the main pillars of a vibrant, modern and civilised democratic nation.   Therefore, all Indians, whether he or she is from the mainland or from the Northeast should demand that the AFSPA be extended to all over the nation. There should be a mass movement supporting this demand for the sake of national interest.

(Author’s opinion is his own and do not represent Fried Eye Media. The piece is a satire. Read it like one. Spread the word. AFSPA does no good)