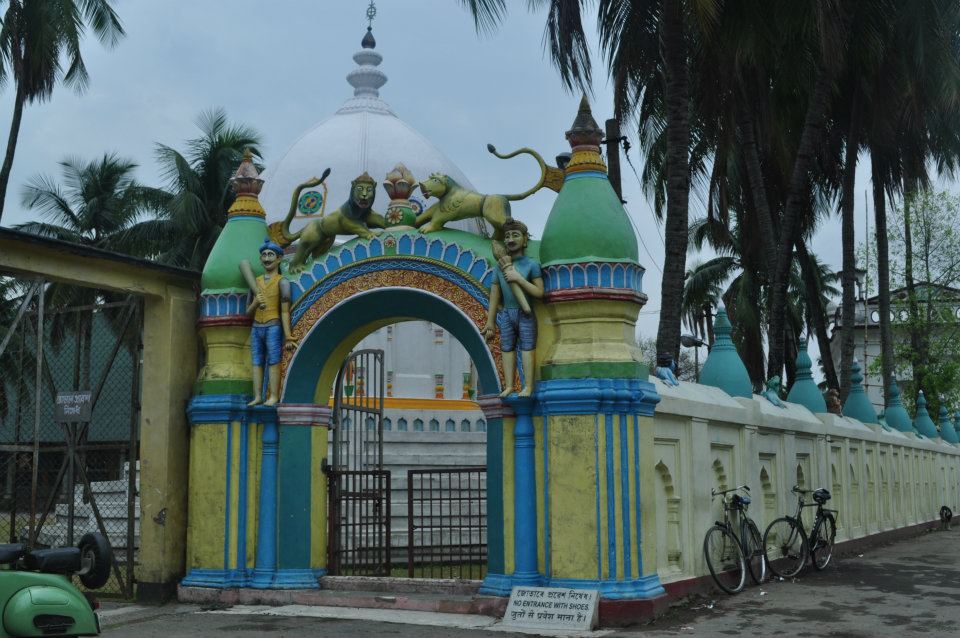 I remember visiting the Satra or Kirtan Ghar in Barpeta as a child. Barpeta is my mother’s hometown and I was visiting my grandparents when I first got the opportunity to visit this famous Satra which was established by Vaishnavite saint Madhavdeb in the 16th century. The atmosphere was serene, the many buildings and sights within the campus quite intriguing and for a 10 year old me, it was pretty much a fun experience. I don’t remember what the shrine inside looked like, but I do remember going inside along with my father and uncle, while my mother, sister and grandmother waited outside. Some 12 years later, on another visit to Barpeta, it hit me hard that I was no longer allowed to enter the main kirtan ghar. This happened some four years ago.

Even though I had always known that women were not allowed inside this Kirtan Ghar in Barpeta, no question ever arised in my mind as to why it is so. Maybe because I have never been much of a religious person, it did not bother me much. Nor did I give it much of a thought. But gradually, with age and maturity, as my frail mind started learning to realise and understand the world from a woman’s point of view, the question did arise. This, and many more as well. The one thing that such a ban on entry of women into a place of worship probably speaks of a society is its conspicuous prejudice against women. Condemnation of women when it came to religious matters is not a new phenomenon. This, and the issue of discrimination of women in the larger context of the society can be well traced back to the times when patriarchy found its roots in the society. In this case, many might want to stand strong to validate the ‘age old tradition’, citing the need to ‘protect the ‘purity’ of the satra, because traditionally, and even now, menstruating women are considered ‘unclean’ or ‘impure’. But, the question as to how a man born of a woman who is considered to be ‘impure’, is deemed pure, stands unanswered even today.

As women activist and Executive Director of North East Network, Dr. Monisha Behal puts it, “The entry of women into a Satra never entered any kind of discourse or debate during Sankardeb or Madhabdeb’s times. As far as my research work in the late 70’s on this subject goes, Sankardev laid down the principles of heterodoxy and acceptability of all caste/creed/gender groups in reciting the Naam. The simplicity of the Naamghar system captivated my thoughts in my youth and I understood it fully in relation to my mother’s frequency to the Namghar in Tezpur. She too told me, many years back about the arrogance of Barpeta Satra and said that this belief of not having women in the Satra should not become a ‘habit’ of the system. To me the denial of access to women is done through scribes and practice of those in ‘power’. Invariably it is the ethos of a patriarchal order to keep women below the men.”

Like my grandmother Srimati Tarulata Das recently expressed in an article published in Amar Asom, according to folklore, at the time when Mathura Das Burha Aata used to be the Satriya of the Barpeta Satra, one day in his absence, a fire had broken out in the kirtan ghar. His wife, Aai Sumati, worried that the lamp inside the Kirtan Ghar would die out, had entered the shrine and protected the lamp by covering it with banana leaves from all sides. This clearly means that there was originally no rule against women entering the shrine. This rule was established several centuries later only; a tradition that tries to imply that women are by no means equal to men.

There have been several attempts to lift this ban on women entering the Barpeta satra over the years. Even as early as in 1948, a young woman named Sarada Bala Das had filed a petition requesting a reform in this age old tradition, only to face severe criticism and disapproval from many, including the people of the Satra. From time to time, women like former Prime Minister Indira Gandhi and literary stalwarts like Mamoni Raisom Goswami, Amrita Pritam, Kamala Barua, Shila Borthakur and Nirupama Mishra have tried to conduct dialogues with the concerned authorities to dissolve the sanctions but were lent a deaf ear to.

With all due respect to traditions and to the people who established them, I cannot help but feel strongly that with changing times, certain traditions can be at least negotiated, if not completely done away with. Traditions can be held on to, only as long as they seem practical and reasonable. To start with, menstruation is a natural process, which does not and should not have any connection to a person’s being ‘clean’ or ‘pure’. If anything mattered, it would be a person’s faith in the religion he/she follows. Secondly, even if it did (as it is popularly and traditionally believed to be), I doubt if a woman would really ‘want’ to visit a place of worship during the days she is menstruating. But what about the days when she is not? Does she not have the right to visit the shrine then? What about those elderly women who have already reached an age they longer can menstruate? Why debar all women from entering the shrine and denying them their right to religious practice?

Men and women are two equal creations of nature. Neither is superior to the other and the only difference lie in their physical appearances. Simply clutching on to traditions without reasoning in accordance to the changing contemporary times will never pave the path to a progressive society. We have to maintain the legacy of the great saint by correctly interpreting his teachings of social discipline and humanized love; allowing easy access to places of worship to all without any prejudicial treatment. Somewhere down the line, we have to welcome a few changes getting rid of blind faith and superstition. Only then, we can hope for an equal society.

THE VALUE OF ZERO: Celebrating the Backbenchers

The Death of a Terrorist | Yakub Memon |