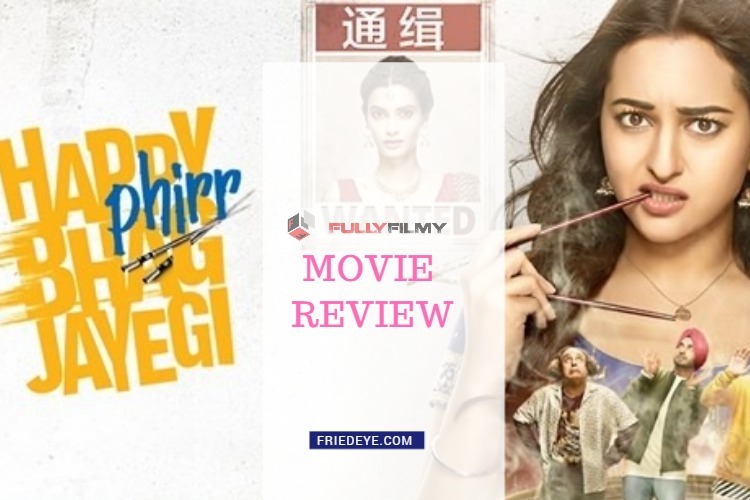 In one of the film’s hilarious scenes – and there are quite a few actually – the lovable Usman Afridi asks Bagga, “Desh toh azaad ho gaya, lekin Kashmir ka kya karein?”. It comes across as a simple line that but when seen in context to the real-life bilateral ties, a Pakistani asking that question to an Indian speaks volumes of how delightfully layered Happy Phirr Bhag Jayegi is in its humour. The film has multiple such lines that allow us to laugh at how funny the complex can be.

Sequel to the much loved 2016 Happy Bhag Jayegi, Happy Phirr Bhag Jayegi takes us to Shanghai, China. While the earlier was based on a runaway bride landing in Pakistan, this time it is about mistaken identities – one Happy being kidnapped instead of the other. The reason behind the kidnapping is quite hare-brained and might in a way look too convenient for the screenplay, but then that’s exactly why the goons become so lovable. They are silly and clearly do not have much of a future in the world of crime, as Sonakshi’s Happy says out in a scene.

The kidnapping is followed by a mad ride to find why she was kidnapped, her escape and then finding the other Happy, who we have already met in the 2016 film. While all this unfolds, the clueless Happy (Diana) and her husband Guddu (Ali Fazal) happily enjoy boat rides in Shanghai.

Mudassar Aziz builds a hilarious screenplay. Never for once does he resort to anything that does not fit the essence of the film. Every scene adds up and more importantly entertains. But most importantly, many of these scenes could very well turn into a classic, just because of the way the director has dealt with it. Some of the sequences are spontaneous that it is difficult to figure out whether it is all written and rehearsed or did things just happen on the sets and the director decided to keep it.

None of the actor – Sonakshi Sinha, Jimmy Sheirgill, Piyush Mishra, Ali Fazal, Diana Penty and Jassie Gill – ever slips out of character. They nail each and every dialogue with conviction and adds to the delight. Jassie Gill, who debuts in Bollywood with this film, shows immense promise. Sonakshi Sinha pulls a perfect one as the feisty Punjabi girl. There is also a fun cameo by Aparshakti Khurana. And Jimmy Shergill sets the standards high.

But the star of this film is Mudassar Aziz and his writing. As a director, he makes a rather over the top premise look plausible. But it is his incredible writing that makes Happy Phirr Bhag Jagegi an absolute joy.