This is not an endorsement or a review. But a reference to how compelling and enticing good work could be! It is something that very few of us can stay oblivious of, at least if you are in the same jurisdiction by profession or geographical vicinity. That’s exactly why Kenny Deori Basumatary struck me at the ffirst place. I stumbled upon him on Youtube, and then connected with him over Facebook. Such are the wonders of social media!

Moving away from singing paeans about social media, which I leave to another colleague of mine, the focus stays on Kenny here. Kenny has a wonderful Youtube channel where he posts interesting videos he keeps coming up with. I found a couple music videos interesting, and then I stumbled upon what hooked me completely. He had posted funny videos with a good amount of Kung Fu in them. For a Jackie Chan fan this was exciting. A guy shooting such videos, editing them well enough to look professional. I had to mail him!

From our subsequent conversations I realised that these videos were just precursors to the movie he was working on. Local Kung Fu! In some time he was kind enough to show me the promo. My persistence paid as soon I became one of the first people outside his immediate family and close friends to watch his first film! I am saying ‘first film’ because today I have every reason to believe that there are going to come in future. And my belief is not standalone. Many in film industry in Mumbai slowly and surely have opened up to an Assamese movie called Local Kung Fu and the immense possibilities that it could bring to moviemaking!

At the recent FICCI Frames 2012, Anurag Kashyap spoke about how with the right intent people could make a film in Rs 1 lakh, like Kenny did!  Frames happens to be Asia’s largest film and media conclave organised every year in Mumbai by FICCI. Earlier national news channels Aaj Tak and Headlines Today took notice of the same effort too.

True, Kenny made a film for Rs 1 lakh! That is what makes his film such an interesting point of discussion.  And Local Kung Fu happens to have a fair dose of Kung fu scenes. Of course Kenny had certain unfair advantages in being able to make a film for such a meagre sum of money! His uncle is a Kung fu master whose services and students came in free for the film. Same goes for the music as his brother happens to own a music studio! But that makes it no less significant. Local Kung Fu is probably the first ready to release Indian feature film that has been shot in a Canon 550D, taking digital filmmaking to another level. For the uninitiated 500D is a still camera which also allows you to shoot HD quality video. There have been some examples internationally where small films hitting the festival circuit have been shot with this particular small wonder.

Local Kung Fu becomes an example for filmmakers. Especially ones from areas like Assam where cinema is almost in state of comatose. While Hollywood expands its reach releasing their films in regional languages, the so-called ‘Bollywood’ has grown in stature and quality too. It has become increasingly difficult for an Assamese film to earn profits while competing with big budget affairs. While story and the craft of storytelling are imperative, the time also calls for smart filmmaking and releasing it in even smarter way! Smart filmmaking of course means making telling the story in shortest and least expensive manner. Local Kung Fu, even though has its shortcomings, taps exactly in this. 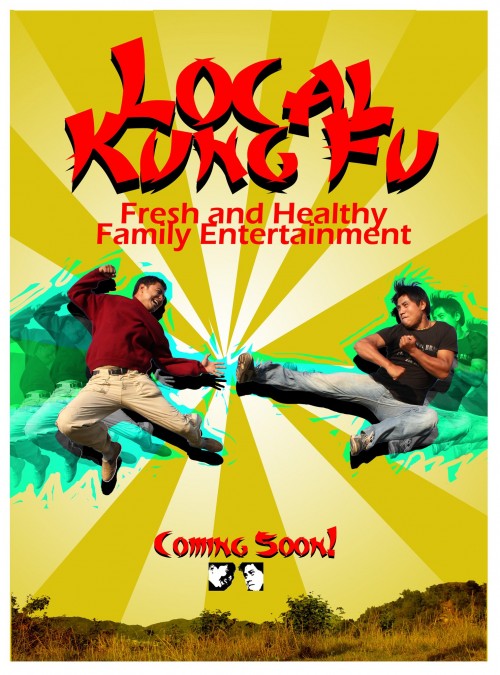 As Kenny continues to work on polishing the film further he also works single-mindedly towards releasing it commercially.  Cinema after all is a commercial art. And if the encouragement from the industry so far is something to go by, this film could very well be a trend setter for many more to come. Let’s hope this Local Kung Fu paves the way back to fitness and motivation for the Assamese film industry!

Kenny in the meantime also published his first novel Chocolate Guitar Momos and has enacted an interesting part in Dibakar Banerjee’s soon to release Shanghai.