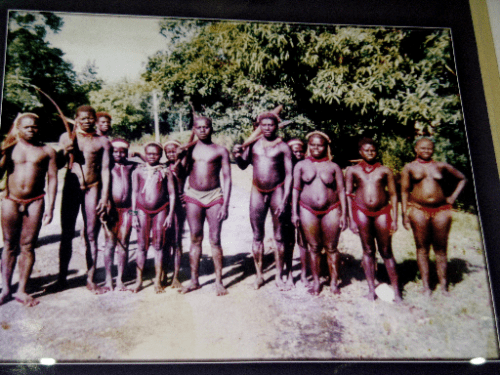 Baratang excited me, not really for the swamp trails and limestone caves, but for two reasons, a live mud volcano and the drive through the Jarawa Tribal Reserve. The pre-morning twilight hues were still far away, the stars were strikingly clear and sleepy trails of speedy vehicles dotted the road. After more than an hour of narrow bumpy travel from Port Blair, I was greeted by a long convoy ready to detour into the deep wild. The Great Andaman Trunk road, the artery of Andaman’s transport system passed through this very thick forest, the legal home of the Jarawas.

Meanwhile during the long wait of nearly two hours, I obnoxiously relished the fresh air, green skylines and the rising sun which I miss in Delhi. By eight, the convey under strict vigilance of police began to crawl disappearing somewhere into the jungle. We all were given a statutory warning by securities to abide by certain rules while passing through the forest- no clicking, no shooting, and no offering food to Jarawas and no overtaking any vehicles.

The habitation of Jarawas’ was an entity with pristine abode of untouched vegetation resembling a typical rain forest. I could not get a whiff of any existing civilization. There was no sight of any homestead and nature was untamed. But after a few miles, as the highway began to twist and turn I could get a fleeting glance of a Jarawa couple; the man held a rudimentary spear and a woman walked beside him with poise. They listlessly walked passed the convoys as if in oblivion. Their slow and slight gleam on faces looked blissful. Dressed traditionally, they walked engrossed in some sort of conversation. At a short distance away a wandering girl stood beside the road with a hand on her hip wearing a thick yellow garland customarily made from the young pale yellow leaves and as I glanced at her, she looked brilliantly yellow. The dresses worn by the couples were made of red fabric and tied as girdles. The man had a red band on his short trimmed hair. According to their tradition, Jarawas adorn themselves with shells, clay, flowers, leaves, cotton threads or wools. The women folks collect flowers, colourful leaves and make fibers from the barks which are worn as dresses. Women sometimes adorned themselves with thick garlands that usually cover their upper part of body. Photograph of Jarawa tribe taken from a wall picture from a museum in Port Blair.

A few more kms away a young lonely girl walked least fearful of the thick jungles. She was young beautiful, had wide eyes and her short hair was adorned with red colored traditional band. Her brisk, sturdy steps with discontinuous gaze were hinted towards some destination nearby. Quite a distant away, two well fed toddlers played beside the road unaware of the vehicles just like any 3 years old would. Their mother on the other side of the road cautiously waved and gestured not to cross the road uttering something in short gasps.

As we traveled through the forest, groups of Jarawas were sighted occasionally. A bunch of young Jarawa males dressed only in loose cotton shorts waved and whistled like rustic football players in wild. The young lads coming to their age carried bows and arrows moved in groups harmlessly. Some boys had painted face which almost camouflaged their facial structure. The patterns were linear, and bore criss – cross lines. Probably the designs were made with free hand. These two different groups were from different age groups. Perhaps they live in their community that way, as I read somewhere, that when boys reach the age of six, they do not share the sleeping space with their parents and stay together with other bachelors until marriage.

By this time I had a mix feeling about the development of these aborigines. The jungle in near future will no longer protect them and sustain their bare necessities of every day requirements. The standby road rollers, some workers, the sight of policemen at some places seem to be no longer alien. The road rollers were ready for some work in progress activity. A medical ambulance strictly mentioned “On Jarawa duty” passed us. To the inhabitants of the forest, it was a regular scene and has become a part of their daily affair. Somewhere on a small hill top I could see tiny toddlers huddled up, could be a sort of crèche in a community living culture. By then, I could get an outline of this primitive tribe.

The recent mayhem on Jarawas has pulled world wide attention on their abusiveness treatment Perhaps the Jarawas are ready to shed their old feelings and beliefs away, perhaps they want to take inquisitive plunge into the world unknown. They have become less hostile I hear, have even ventured out to the nearby settlements. But to me, the Jarawa Tribal Reserve, seems to be slowly dissipating and it’s inhabitants show signs of acculturation. Although very less and limited is known about Jarawas, their dwindling population is a matter of concern. The Census of India featured their population at 240 or could they remain contactless. As the stories of development goes on, my thought goes back to the girl whom I saw in my return journey, a young teenage girl dressed in floral yellow with a feathery glittering headgear was trying to get closer look inside the halted vans. I could see her face. She seemed to be different!

Call Of The Mountains