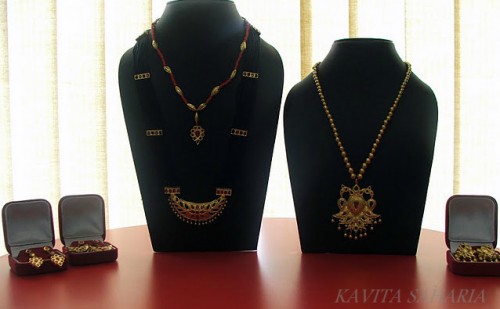 Assam’s tradition of making jewelry dates back to many centuries. In medieval Assam during the reign of the Ahom dynasty the manufacture of gold ornaments was a flourishing business. Gold dust was abundantly found in the sands of different rivers of the state. Gold-washing on the banks of the Subansiri was a major profession of the Sonowal Kacharis. Subansiri which means “flow of gold” is one of the major tributaries of the Brahmaputra. In olden times the different metals and materials used for the making of ornaments were gold, silver, copper, brass, bronze, amber, rhinoceros’ horns and ivory. While most of the designs depict flora and fauna of the region some are inspired by elements of Assam’s culture .Each piece has a name which describes and indicates the shape and decorative work done on it .Many of the designs are exclusive to this state only.

Over the centuries the three major hubs of traditional jewelery making are Nagaon (Rontholi ),Jorhat (Sonarigaon) and Barpeta. There are three different ways by which the jewelery is manufactured .In first method the main jewelery frame is made with pure gold and lac is used as a filling material. The second style has the basic frame in pure silver which is further covered with handmade gold foil also known as leaf gold /pat gold. The joints are made with the help of a mixture called Pine which is a mixture of silver and copper at a proportion of 6:1 .Previously enameling on gold was mainly done at Jorhat. The enamel is mainly of three kinds, a dark blue, dark green and white .Beads or Bakhars are too used in these jewelries. Some of the most popular designs are shown here .This piece below is called Lokapar which is an ornament with two sets of twin pigeons placed back to back in gold, mina or ruby .It was originally worn by high profile dignitaries of the royal Ahom dynasty. This is Junbiri which depicts the shape of the crescent moon.The other ornaments worn on neck are Dhol Biri, Silikha Madali, Gejera, Bana, Dokmala, Kathal Kuhia Madali, Dugdugi, Sonar Har, Dhari, Biri. The named ornaments except for Japhar Madali and Gejera were worn previously by both by male and female. Presently in Assam  traditional jewelery is gaining popularity by the day and they are in very high demand now because of their aesthetic beauty and unique designs. This traditional art is attracting more youth in the state to take up jewelery-making as a profitable profession which is an encouraging sign for the economy of the state. Hope that these exquisite and unique jewelery of Assam gains popularity outside the state too and occupy a place of pride in its possessor.

Images : clicked by Kavita Sahariya. at Mrigakshi Showroom Guwahati
Info: post is based on conversation with Mrigakshi Bora the owner and jewelery designer at Mrigakshi.

A dentist by profession, Kavita sifts between the multiple roles of being a mother, a blogger and a doctor. She uses the form of travel writing the personal diary to focus on the socio-cultural make-up of the North-East .