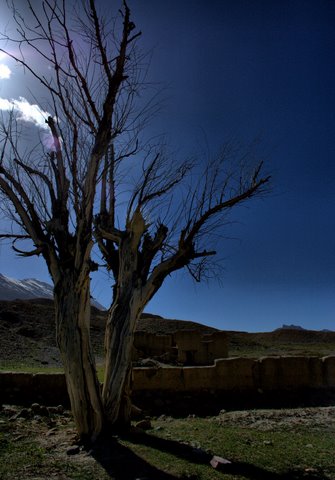 Call Of The Mountains

Shahwar Hussain rides through the beautiful Lahaul and Spiti Valley and buys his peace with the mighty Himalayas. The call of the mountains is a dangerous thing….It tugs at the heart so strong that if you fail to heed it’s call, you will surely brood for a long time. You will regret the missed chance to return to the folds of the mighty mountains, breath the cold fresh wind, walk by the lakes, watch the football sized stars make holes in the black sky at night and make some more friends among the monks (they all look the same…don’t they?…For all you know, you might introduce yourself to an old friend once again!!).

Well, the higher Himalayas have been calling me for a while now and I didn’t want the calls to get any dangerous and so I paid heed last August. I decided to ride to the beautiful Lahaul and Spiti valley. An overwhelming number of riders who point their front wheel beyond Manali, end up riding to the Leh region. It IS a beautiful ride indeed, through some of the world’s highest motorable roads, water crossings, snow peaks, deep gorges and with a number of pristine high altitude lakes thrown in. but of late it has become far too crowded and commercialized for my liking. Of course the tour operators, the hotels and the assorted business have to make money to survive and they are mushrooming all over Leh. I always try and avoid crowded touristy places and at this moment, Leh, certainly fits the bill of a crowded touristy place. But this is my personal point of view. I wanted to ride to Spiti but didn’t really want to take the additional burden of getting all the logistic right. I spent a couple of days deciding on the trip when I met an old friend Vishesh, who run his motorcycle tours in the Lahul and Spiti valley (www.incrediblespiti.com) along with Tsering Bodh and Subhansu Singh.

Riding solo is a nice feeling as we drift with the wind without any set itinerary. But time was at a blue chip premium and I thought riding with Vishesh and his group of 4 riders would be a better idea. It is a good idea to start the journey from Shimla as riding from Delhi through the plains of Punjab can be a rather boring affair. We started early from Shimla and stopped at Narkhanda for breakfast. Riding in the hills invariably gives me a good appetite and after having our fill we rode on to Sarahan. This 110 km is a lovely ride on winding roads through a Deodar forest. Although we rode for about 10 hours on winding roads, it was not overtly tiresome and we spent the night at Sangla in tents at the Kinnaur Camps. Foran overwhelmingnumber of riders, it is the ride that matters and the ride is considered a success if they can enjoy a good camp fire and that is exactly what we got. And yes…we did do the touristy kind of thing too as we went to see the 900 year old Bhima Kali temple. It is amazing and we didn’t regret this touristy bit of activity one bit. An early morning start again as we made our way to Kalpa via Chitkul which is the last village on the Indo-Tibetian border. It is a very scenic ride from Chitkul to Kalpa and we could see the Kinnaur Kailash peak which seems to change its colour during the course of the day. The apple orchards along the way accentuates the feel good factor of the ride and the sparse traffic added to the ambiance. Vishesh had the tour nicely paced out. After the 10 hour ride the day before, it was a 4 -5 hours of easy ride and we arrived at the Apple Country hotel in much better shape.

The next day the terrain changed quite a bit as we again rode for 10 hours from Kalpa to Tabo via Nako. At Khab before Nako, we could see the confluence of the Sutlej and the Spiti rivers and the hills became barren and brown as we entered the cold desert. The two checkpoints at Spillo and Chango didn’t take much time as we were the only “tourists” around. Travelling with people who knows the area has its advantages. After Kalpa, Vishesh suddenly pulled up by the side of a rather old tree and announced ‘lunch!’. I certainly didn’t see any place or anyone who would serve us lunch but as we climbed a few stone steps by the side of the tree, we saw this small dhaba and we had the most amazing paranthas ever.

After we crossed the Sumdo checkpoint, we took a diversion on the right that took us to Gheun, whose claim to fame is the naturally preserved 600 year old mummy of a Buddhist monk that was discovered after a landslide exposed it. It is a little off the way and not too many tourist visits this area…All the better. Gheun also has an ITBP base.

Tiger Den was our den at Tabo for the next two days as we moved in and around Tabo. The Tabo Monastery is a marvel indeed. The monastery was built in 996 AD and is made of straw and mud,much like the City of Bam in Iran which was destroyed by an earthquake some years back. It is a pity that we were not allowed to shoot inside the main prayer hall of the monastery but just as well. The flashlights would surely destroy the thousand year old paintings and other priceless artifacts. The monks of the monastery have an apple orchard and a sizeable amount of finance come from that. Do not forget to try the lovely cakes made by the small German bakery. I am a sinker for that.

The other 1000 year old monastery is the Dhankar monastery. As we rode up, we could see it from afar and it looked like an extension of the craggy brown mountain itself. Some part of the old structure has collapsed and it has been declared as one of the most endangered monuments in the world. The new monastery built below is not a patch on the old one and I made no attempt of going in. Vishesh took us on a 45 minutes hike to the Dhankar lake…Like any other high altitude lakes, this one was just as beautiful. I have been to the monastery before but never heard about the lake. As we came down from Dhankar to the Kaza highway, we found a ropeway constructed by the locals to cross over the confluence and on to their fields.We took a ride across for a smoke and a tea with the farmer.

After a 5 hour ride the next day, we reached Pin Valley and had a lovely home stay at Mudh. Sadly we couldn’t go to the Pin Valley National Park. The 2 hour ride from Pin valley to Kaza sure is breathtaking to say the least. Motorcycle is the best way to enjoy this stretch as also the way up to Kye and Kibber. The Kye Monastery is a Centre of Buddhist learning and also an Old Age Home but with a difference. The inmates at the home stay there not because they have nowhere to stay but because they want to meditate undisturbed.

Kibber was till recently the highest motorable village in Asia and has some very good restaurant. Considering the altitude and the sparse movement of goods, the restaurants are not at all costly. On the way back, we stopped at Langza and Komic villages. You can still find fossils at Langza and it is such an amazing thing to find fossils of fish and other marine animals in the high Himalayas!! And at Komic we did nothing but sat at the edge of the mountain and saw the red big sun dip over the imposing mountain and turn the sky into a flaming red canopy. We climbed to Kunzumla (4551 mt) from Kaza and then came down to Chandratal. The 12 odd kilometers to the lake is very dusty with fine dusts like talcum powder and they settle everywhere on the eyelashes and eye brows, moustache and beards and make you look real funny. So we had some tea at Chandra Dhaba and off we rode through the dust.

The authorities do not allow any vehicle till the lake now and it had done the lake a world of good. It is a 45 minutes walk till the lake from the camp site and now the bank of the lake has less of those obnoxious plastic water bottle and other waste left behind by the tourists.

Camping out in the open was fun….I slept under a black canopy with a million stars for company;stars that seemed big and close enough to touch and woke up to an impossibly blue sky with not a speck of cloud on it.

On the way to Manali from Chandratal, we had two big stream crossing at Batal and at Gramphu that left us wet and shivering. And if this was not enough, we got stuck at that dirty, rotten, muck filled pass called Rothang.

After an incredible 9 days with Incredible Spiti, I suffered from a bad case of withdrawal symptoms as we hit Manali and the symptoms lasted for quite a few days.

Now I am at peace with the mountains…until they sound the call again!!!