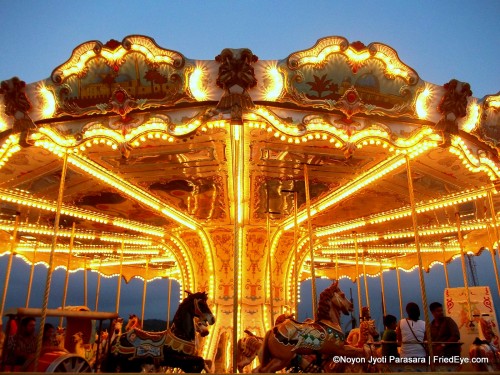 I Imagica, E for experience! 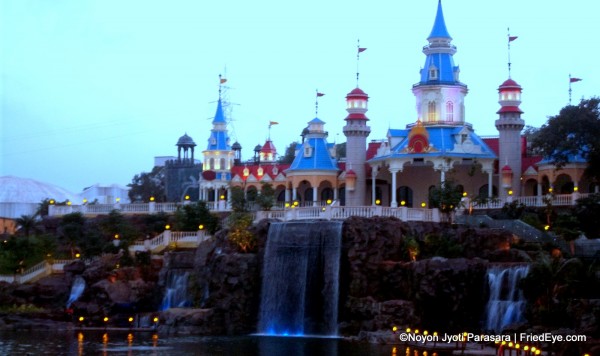 When you work like a dog, you do believe that it’s your right to celebrate the day off from work like a true hero too. And in Mumbai you do not have much of a choice but work like a dog. Thankfully, there are a good dozen getaways that you can opt for during weekends to take that steam off. From getting closer nature to country liquor (if you opt for that), all’s available for residents of the Maximum City within a few hours reach. A recent addition to the list of options is Adlabs Imagica. 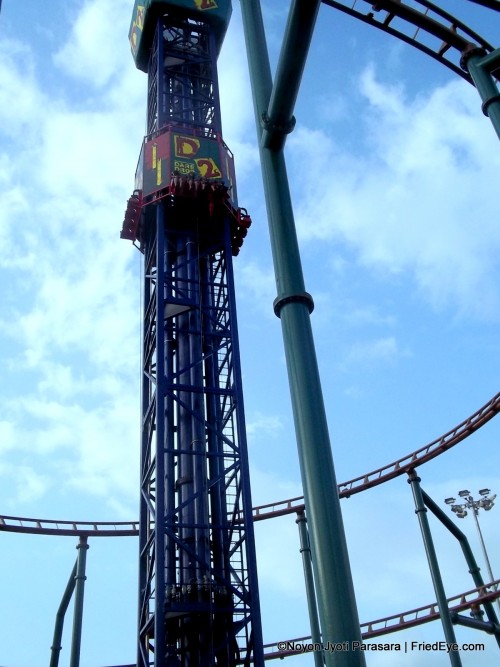 In broad terms, it could be called a ‘movie theme amusement park’. Brainchild of movie-giant Manmohan Shetty and a labour of many years, Imagica opened earlier this year and within a short span of five months have turned into a destination for many who seek everything – from thrill to fantasy in those few hours. And Imagica seems to be delivering pretty well on that. With so much being talked about Imagica, we at Fried Eye decided we should check it out too.

Tickets to Imagica are priced at RS 1500 per head on Hollidays and Weekends; 1200 on weekdays. Tickets for children as sold at 1200 and 900 respectively. Student discounts are available for valid identity card holders on week days.

Like any theme park, Imagica is full of rides and thrilling experiences. So there are roller coasters, fantasy show, simulated rides… and of course numerous photo-worthy opportunities. 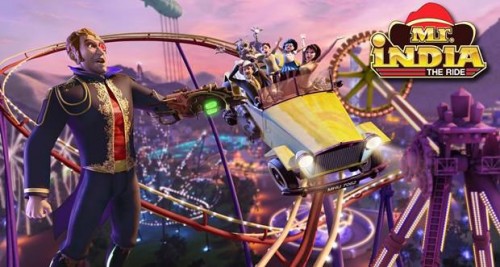 Mogambo is back and he has kidnapped Mr India’s kids. He is out to save them and he invites us too. So there we go flying through picturesque locations in a simulated car – invented by Mr India – and help nab Mogambo in the picturesque Imagica complex! A roller coaster and a movie rolled into one. Wondrous, the feeling of actually flying over Imagica! Easily the best of the lot.

A ride into the caves of those dangerous thieves, with a gun in your hand! Shoot them to earn points; compete with your partner. Well, this one is fun – for kids and adults alike.

Prince of The Dark Waters

You would wonder what they have to show, as they make you stand and look up towards the huge dome screen. And then the show starts. Wonders of animation takes you into the sea and makes you a part of a love story – which is not quite endearing – but nevertheless exciting! 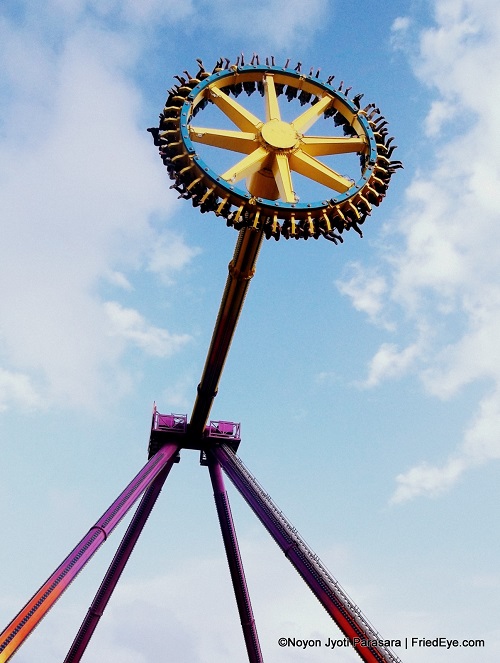 If you are not fond of speed, DO NOT try this. A roller coaster is one thing, being hurtled at the speed of 90kmph is beyond scary. It’s almost throws out the intestine from the body. It shows you stars, literally! We came out laughing. FYI, this is India’s first dark roller coaster ride.

This one is modeled on the Jurrasic Park Ride of Universal Studios. You are on an expedition through the forests full of dinosaurs. You may think you saw enough, but wait till the end and you know why they say… the best is saved for the last!

It is the wild wild west! And you are a part of it! Ranches, cowboys and a roller coaster that takes you through all of it. We shall credit you if you manage to check all of that though as the ride takes you through a 66 feet fall at 65kmph and them up again… and goes round and round till your screams your lungs out. We suggest, try this before you do go to Deep Space. You don’t go to school after you pass college, unless you are a teacher! 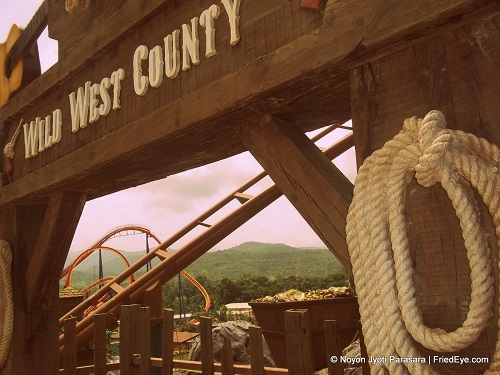 Wrath of the Gods

The Gods fight over supremacy and you are a witness to that. Almost at the risk of facing their fury! So there is wind, water and fire… and a lesson that should never be forgotten. 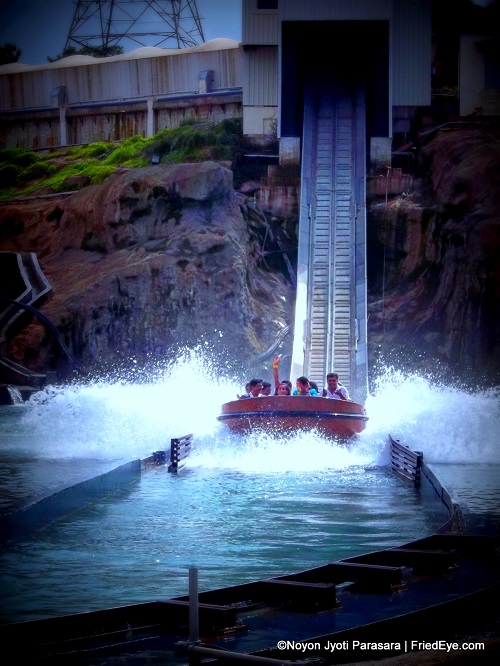 If you thought this place has little for adults, well the kids have enough for them. From mini roller coasters such as Bandits of Robin Hood to fighting pirates with water guns on Splash Ahoy. And of course there are merry go rounds like Tubby Takes off and the Magic Carousel and of course the totally fun Bump It Boats!

Some cribbing, some complaints

This is one of the most ambitious projects of Imagica. It is a film that instills pride in the beauty of India. Aerial shots of some of the best known locations and monuments from across the country, edited into a film. Something that could give you goose-bumps… almost. But then I for India dramatically leaves out some very important parts of the country. While there are remarkable shots of Kashmir, Punjab, Maharashtra, Tamil Nadu, Karnataka, Gujarat, Delhi, Uttarakhan and Rajashthan there is none from North East. Not a single frame from the entire of the seven states! But then this is not a northeasterner’s rant. They missed out of West Bengal, Bihar, Sikkim and Orrisa too! Not quite a complete India, is it? I for Ignorance?

Apart from that, it also makes sense for the audience to take seats in the first row to get the best view. We sat in the third row and along with the screen we also saw a dozen dangling legs (the seats are elevated to give you a air-borne experience)

Also, we suggest the editor could have slowed down the pace of the video. The pace almost gives one a head-ache

We skipped two rides. Would have been three had Nitro been complete.

After the shocker of Deep Space, Nitro just seems out of the league. Soon to be completed, if you have a thing for danger take the Nitro! This coaster will apparently take you down the twisted tracts for 3 minutes at a speed of 120kmph. We would not take the chance!

The other two seemed equally dangerous… but then we saw kids enjoying them. First is the DARE TO DROP. This one take you up like a rocket and then you fall from height of 132 feet. Nah, thanks we preferred the ground!

The next is the SCREAM MACHINE. Ever dreamt of being the bob at the bottom of a pendulum? If you did have such weird dreams, this could make it come true. A huge pendulum, where the bob rotates as the pendulum oscillates!

It is easy to reach even if you do not have your own vehicle. Imagica has tied up with Neeta Travels to provide bus services from Pune and Mumbai, ofcourse for a premium.  The bus ferried us from our chosen location in Mumbai to Imagica.

The staff is extremely courteous and helpful.

The fact that you can keep opt for the same ride multiple times, without paying extra!

If you are lucky enough you will also get to see some activities that are planned by the events team of Imagica. We witnessed some kickass dance performances by a young group of dancers.

Not so likeable stuff

Rs 1500 per head does tend to be on the upper side for many. A family would need to think twice before going there. Family packages might be a good idea.

Outside eatables not allow. Well, we respect the rules. But then… food inside could be made tad cheaper.

For people who opt for bus services, you do not have flexibility to leave early if you are done. The bus only leaves at 9 pm, when the park shuts. By then you could be drained of all energy.

Overall: Some truly said this is India’s own Universal Studios Hollywood. We would love to go there again. Just for the Mr India ride , if nothing else. This is what we call an absolute paisa-vasool weekend option.  Ekdum Jhakaas – In true Anil Kapoor style!

Unakoti – A pilgrimage for art lovers