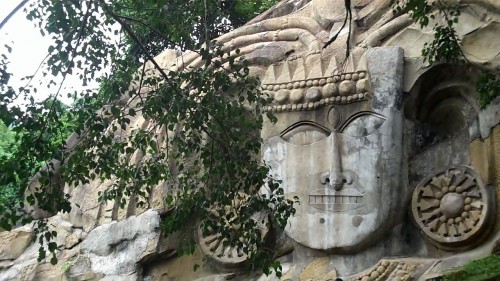 Last weekend we visited Unakoti in Tripura, a place of which we heard of but never knew what it would be like. After a not so long journey, we reached there and we were left speechless in awe of the great art. Located amidst dense forest, one wonders what wondrous spell must have made the artists build such wonderful pieces of art in such a secluded place. The sculptors remain unknown till date. Who built them, at what point of time were they built, why were they built? All these questions remain unanswered shrouding the area with a mystery. 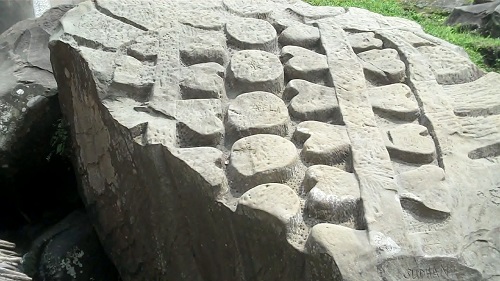 There are various ways to reach Unakoti. You can hire a vehicle if you are a group of 5-6. Trains are also a great way to reach there. Trains are aptly named “Mama’r Gaadi” (Maternal Uncle’s Vehicle) as it very economical. It takes Rs. 15 on passenger trains from Karimganj to Dharmanagar and Rs. 30 in Agartala Express. Unakoti falls midway from Dharmanagar to Kailashahar. There are Jeeps available from Dharmanagar to Kailashahar. 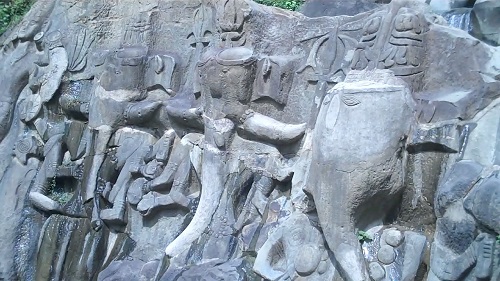 Unakoti is located 10 Km from Unakoti District Headquarters, Kaliashahar. The road was inaccessible few decades ago. One had to come all the way on foot passing through deep jungles and crossing mountains. The scenario changed after the road connection was established. A diversion road runs from Dharmanagar-Kailashahar connecting the road upto the place of pilgrimage. 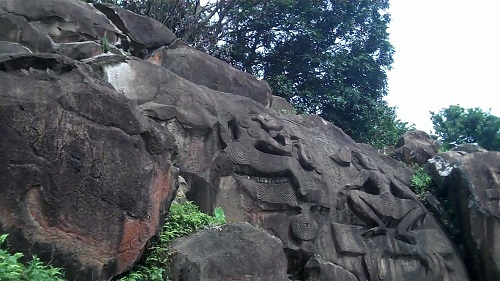 On the hilly terrain many idols of gods and goddess are lay scattered. At the main peak there are colossal sized idols of Uma-Maheshwar, five-faced Shiva, Vishnu, Ganesha, Hanuman and Ravana. Among the carved-out images on the rocky fringes, those of Ganesha and Shiva are prominent. This image of Shiva as Lord of Unakoti (Unakotiswar) is famous as Kal-Bhairava. Goddess Durga is also carved on the side of the hill. The four-faced idol of Unakoti is known to all, though the fourth face was damaged long back. 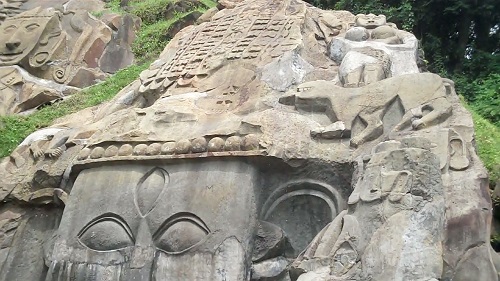 Theses idols are dated back to 7th to 9th century. The exact time is still a controversial issue as there are various opinions about it and there is no recorded history about it. However, it can be safely said that the idols were made at various times as various influences are clearly noticeable. While some archaeologists opine that this was a Shaiva Tirtha during the rule of Pal dynasty, some others opine that it was a Buddhist meditation centre. 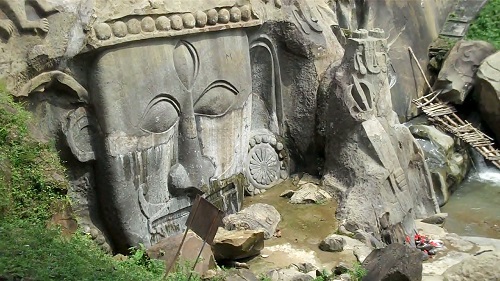 Although the facts are debatable, one cannot stop wondering about the sculptures. They are cleverly curved out and on changing the point of vision one notices different idols. Some sculptures lay hidden along with a larger sculpture. The central Shiva head known as Unakotiswara Kal Bhairava is about 30 feet high including an embroidered head-dress which itself is 10 feet high. On each side of the head-dress of the central Shiva, there are two full size female figures – one of Durga standing on a lion and another female figure on the other side. Definitely, it needs more than one visit to understand the sculptures and explore the art.

There are many mythological tales revolving around this place. According to one tale, one crore Gods and Goddesses (including Shiva) were going to Varanasi. On the way they thought of taking rest and shelter on this hill for the night, but before going to bed lord Shiva strictly warned them to get up at the dawn before the sun rises and leave for Varanasi. The following morning only Lord Shiva got up and nobody else woke up and being in angry mood he cursed them to become stone sculptures or images and stay there forever and ever. Unakoti means one less than crore in Bengali and hence this name. 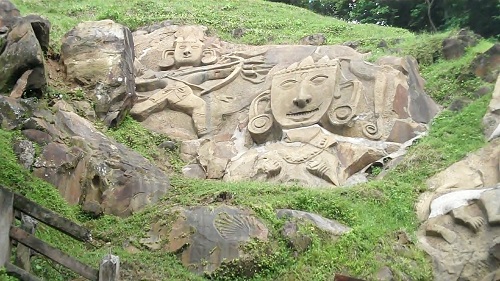 Another mythological reference says that there used to be a sculptor and potter by the name of Kallu Kumhar. The local tribes believe that it was Kallu Kumhar who had carved all these images. He was a devotee of Parvati and wanted to accompany Shiva and Parvati to their abode on Kailash Parvat. On Parvati’s persuasion Shiva agreed to take Kallu to Kailash if he would sculpt a koti images of Shiva in one night. Kallu worked as a man possessed. But as the dawn broke the number of images was still one less than a koti. Shiva who was keen to get rid of this nuisance called Kallu, used this excuse to leave behind Kallu Kumhar and his images at Unakoti.

The Unakoti images have long been neglected but there has been many damages made by natural calamities and wear and tear. But now, it has been declared as the Union Heritage Site by Archaeological Survey of India and preservation and restoration works have been done, though a lot of work remains to be done. There is a lot of excavation yet to be done as it is believed that there may be more number of sculptures buried under the ground. The Govt. of India has also approached UNESCO to make it World Heritage Site. Hopefully, it becomes a World Heritage Site and restoration can be done in a better way.