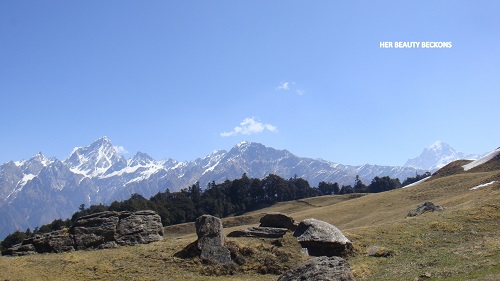 “Up there, where the promise of the Higher Being allures, I shall make my way to breathe a breath more under the pristine sky…”- a monologue

I had slept barely for an hour when I woke up to the snooze of my cellphone. The display read’ 03:15 AM, Saturday, April 3’, in IIP, Dehradun – my sanctum-sanctorum for a month. I heard exhilarated shrieks at the hallway –my excessively excited travel mates! Downstairs, our driver, called out to us, “Ready ho gaye aaplog? “… And before I could gather myself, I was seated in the car, inching closer towards Nanda Devi Biosphere Reserve (NDBR). 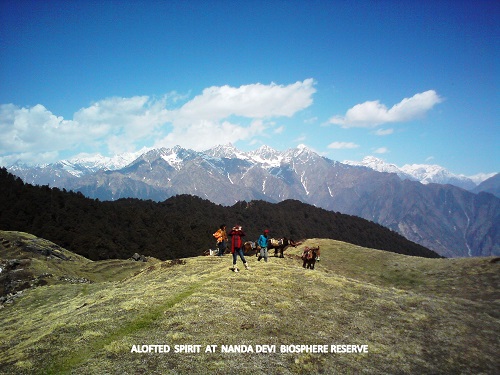 The biosphere reserve concept is considered to be a major achievement in environmental management. Biosphere reserve is classified as a preservation area selected by the United Nations Educational, Scientific and Cultural Organization. NDBR had opened its doors for tourists only from 2004.

Uttarakhand, in all her nuances, transforms you into an uninhibited traveler. Every stop is a tourist’s delight and the journey is not only about the destination you’re bound towards. Our first halt was at Dev Prayag-the confluence of the turbulent Alakananda and the serene Bhagirathi. For me, the steep gorge and the houses of the natives perched dangerously on the mountains uncannily narrowed the definition of the meek and the mighty. As we drove further to our next stop, Rudraprayag (confluence of Mandakini and Alakananda) we noticed a defining change in topography. The humble mountains swelled into lofty ones, tearing out scrupulously over a rugged contour. All throughout I felt my awed nerves loosen up in calculated coherence at each bend of the hostile serpentine roads. 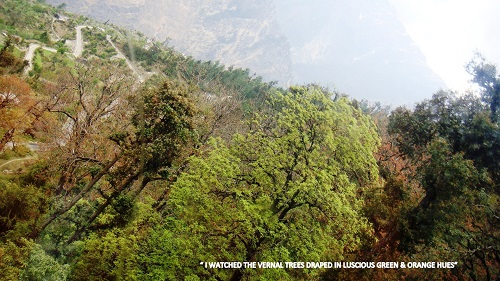 We reached the last motorable point, Joshimath, at around 3:30 in the afternoon. Thereon, we were to travel further up to Auli in a cable car. I was totally delighted by the idea of boarding Asia’s longest cable car (Gondola, 4 km). This ‘Googled’ fact, I announced with unabashed pride to all present. As the cable car progressed tardily uphill, it heightened the arousal of my senses in all their palpability. Breathless, I watched the vernal trees draped in luscious green and orange hue, approach and glide past mutely beneath.

We had our accommodation reserved at GVMNL (Garhwal Vikas Mandal Nigam Limited) Skiing & Tourist Resort. Luxury is gold’s bargain when you’re heaving at an unearthly height of 3000 metres. Fortunately, the GVMN resort had all the basic luxuries sincerely restated into a neatly done bed, running hot water and homely food. I retired early to bed cerebrating about the rendezvous with the ‘terra incognita’ that was just a night away. 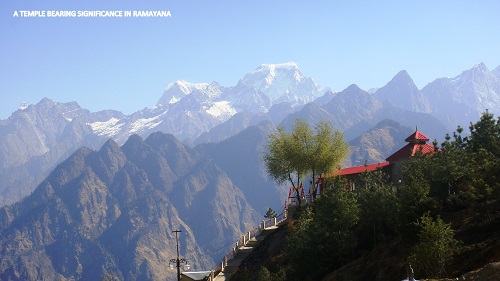 I opened my eyes to the most beautiful morning of my time lived. It was spell-binding to watch the panoramic view of Nanda Devi and her sister ranges open up to the eye of the sky, in orderly succession, each wanting a slice more of the empyreal beams. I rushed out with my camera to capture the magnum opus- Nanda Devi, in her unmatched ebullient self, basking in the glory of the morn.

The snow in the slopes had melted a fortnight back we were told. The slopes there provide unsurpassed thrills to professional skiers and novices as well and have been voted to be one of the best in the world. That GMVNL has imported snow beater to maintain slopes is quite laudable a fact. With the oxygen level dropping drastically, the ascent on foot to the reserve seemed next to impossible. Therefore, the sanest decision was to pillion ride. We resumed the ascent with three jockeys at our disposal, to guide us in a land of which they may claim to have seen up to the last gravel and I would be generous enough not to refute. The day was unfolding into a magical one with the greenly spirits of trees and the blue dream of sky. I introspected- everything which is natural has to be infinite and it is often in wilderness that the miracle of life is sensed.

Mid-way of the ascent, we were interrupted by two non-descript natives who had with them the entry passes to the reserve. They were stupefied to learn that we were from Assam and if their chalk and slate statistics are to be believed, we were the first to be there from the far (far!) east! Unlike the tailored reserves in the mainland, NDBR does not languish within a fortification and bears no bruises of mortal ravage. I stepped down from my pony, walked up to the blunt edge of the slope and opened my arms wide open… I never felt so liberated to the core yet at the same time so powerless. One of the jockeys pointed out to a conspicuous depression in the mountain range. As a legendary percolation, Hanuman had journeyed to the Himalayas to retrieve the ‘Sanjeevani ‘herb. And if the jockey hadn’t fabricated, we were actually feasting our eyes upon the lacuna created by Hanuman after having uprooted an entire mountain! 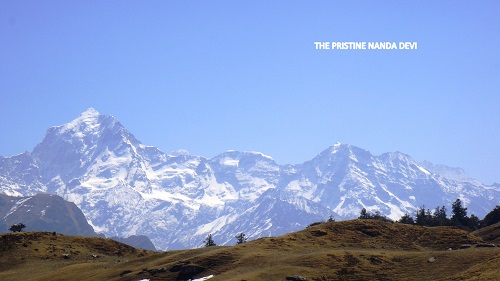 Finally, at a height of 4,900 meters (16,076 ft) we got our due-pristine white snow!  After having done some frolicking and photography, I walked up to an inviting parcel of grassland and reclined with my eyes affixed on the enchantress, Nanda Devi. I pondered on Nature and her modus operandi- the way she unfolds her treasures to our search, unseals our eyes, illumes our minds, and purifies our hearts.

I had never felt so paper-thin before.

I Imagica, E for experience!