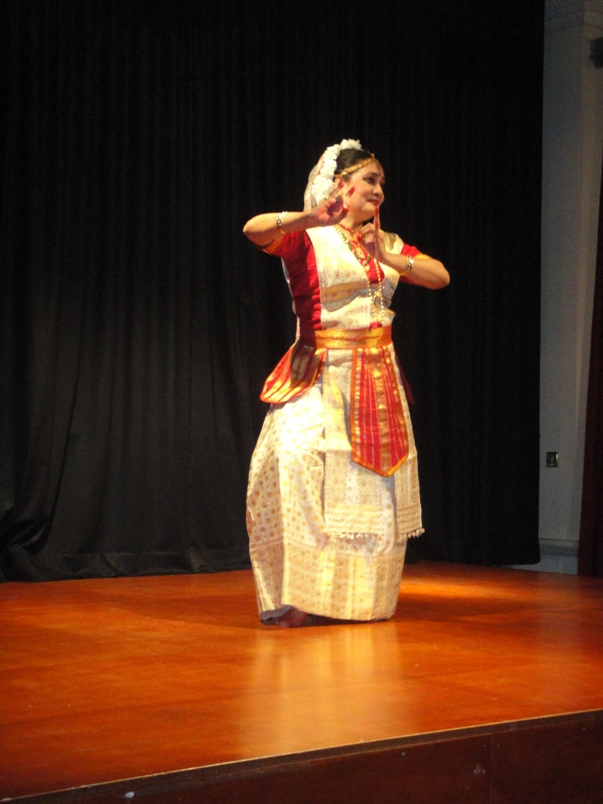 Sharodi Saikia has a rare combination of dancer, choreographer, teacher and music composer, has been pursuing this dance form for more than three decades with untiring devotion and exemplary zeal. It was her Guru, the legendary Rokhkeswar Saikia Borbayan of Kamalabari Sattra, who was the moving spirit and main protagonist instrumental in transplanting this rich cultural treasure trove from the religious-ritualistic moorings of the Sattras to the secular stage enabling the common people to enjoy it as a cultural treasure. Sharodi is one of the few who balances a full time HR  career along with her passion for music. At present She, is the Director of Srimanta Sankaradeva Kalakshetra, Guwahati (The Premier Cultural Institution of Assam)
The event was organized by Rini Kakati, NRI Assam Co-ordinator for UK. Gowri Shankar, Second Secretary Culture & Deputy Director of Nehru Centre in his welcome speech spoke highly about the art and culture of the North- East and welcomed the invited guest artist from Assam and the dignitaries.
Tara Chand, Minister Secretary of Indian High Commission in his closing speech mentioned about the richness of the North- East, especially Assam and the importance of showcasing unity in cultural diversity.
The evening commnened with “Krishna through Assamese Eyes”. Srimanta Sankaradeva and his prime disciple Shri Shri Madhavdev while propagating the Neo-Vaishnavite movement with One- God concept takes Shri Krishna as the principal deity and eulogizes him by elaborating his heroic and interesting deeds in their writings.
In Indian mythology Shri Krishna happens to be the most powerful and interesting character. Mischievous as a child, apple of everybody’s eyes at Gokul he grows up as the most handsome adolescent playing the flute and enticing the damsels of Gokul to Vrindabana. Killing demons from a tender age he turns out to be a great warrior, effective ruler and shrewd statesman.
Poets and lyricists after them have also described Krishna in many interesting ways. In 20th Century Jyoti Prasad Agarwalla, a genius, the ‘Rupkonwar’, portrayed him as a friend while Bishnu Prasad Rabha, the ‘Kalaguru’ depicts him as a bohemian, crazy lover-boy enjoying the gopis’ disappointment by disappearing while playing ‘ghila’. Dr. Bhupen Hazarika added to the range by rendering his golden voice to these numbers and also to a number of folk songs on Krishna’s life and moods.

She began her presentation with Krishna Vandana, based on a few ‘Nandi Shlokas’ taken from Shrimanta Sankaradeva’s Ankiya Naats, set to beats of Na-Dhamali followed by a ‘Geetor Nach’ based on a composition by Shri Shri Madhavdev that illustrates mother Yashoda waking up and preparing her son for grazing the cattle, and while doing so the latter making merry with his friends; two items ‘More Jibonore Sakha Krishna’ and ‘Oliya Boliya Krishna Koliya’ by Jyoti Prasad Agarwalla and Bishnu Prasad Rabha rendered by Dr. Bhupen Hazarika were followed by ‘Dashavatara’ from Kirtan Ghosha with demonstration of ‘Avatara’s.
She was intervied by James Brewer, well-known journalist from Confluence. One British lady even made a sketch of the artiste impromptu. Sharodi was in tears when people called her an angel.
Rini Kakati