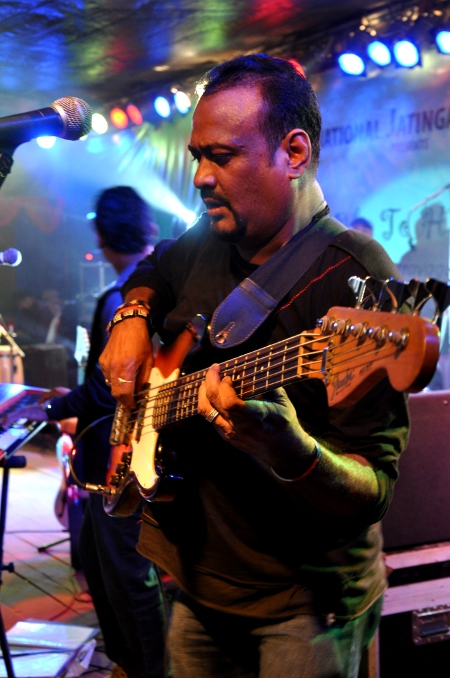 Rakesh Barua – A Tribute to a musical Journey

“The news is yet to sink in. For it was just before Bihu that I met him at his house. Rakesh da was busy that last day I met him; he had a performance in R&B club that evening. But despite being hard-pressed for some time, we somehow got talking and he became real nostalgic and started talking about his escapades with another close friend. He was so excited about his new plans; he was collaborating with quite a few musicians both in and outside the State. He was also excited about his coming trip to Arunachal Pradesh. He said it was an important one for him and his future business plans. Once he came back, we also had our own plans regarding some music and stories…” says Aiyushman Dutta, the cultural reporter of The Sentinel and a member of the Eastern Beats Music Society.

Little did he know then that he would not live to see those plans materialize! 19th April, 2011… the day that spelled tragedy for the people of the North east when the Mi-172 helicopter of the state-owned Pawan Hans Helicopters Limited  caught fire and crashed in Tawang, Arunachal Pradesh, killing seventeen out of the twenty three passengers on board. One of those unfortunate victims happened to be Rakesh Baruah, an eminent musical personality of the region. The news of his sudden untoward death has hit the music lovers of Assam and the North East like a bolt from the blue. The bass guitarist who used to be the favorite accompanist of most of the leading musical stalwarts of the region, like Kalyan Baruah, Lou Majaw, Rudy Wallang, Zubeen Garg and Jitul Sonowal to name a few, was suddenly no more, leaving behind an unimaginable void in the music industry as well as in the hearts of the people who loved him.

In the words of music journalist Satyakee D’com Bhuyan, “A broad-shouldered bolero man with a ready grin and a French beard, Rakesh Baruah was an avuncular individual and a bassist of rare sensitivity and skill. Adept at accompanying singers and soloists alike, he chose his notes judiciously and with precision, yet he also packed sufficient punch as a bass guitarist to propel the most aggressive of rock bands. An outdoorsman, Rakesh whom I fondly addressed as Shakti, was also a well-known figure in the tourism circuit.”

Mr. Rakesh Baruah was born in Guwahati in 1966. The bass guitar was not the first instrument that he was in love with. It took him a lot of experimenting with various other musical instruments before settling on the bass. His playing skills were enhanced when he joined the Don Bosco School Band (Bosco Beats) as their bass player and went on to play in bands like, Friends, Point of No Entry, Crystal Palace band, Phoenix / YU and finally Moonwind, a band that he formed with his friends in the year 1995. Baruah was an active member of the band Moonwind till the very end, having toured and performed with them all these 15 years, excelling at everything ranging from R & B, Rock, Pop Rock, Ballads and Rock ‘n’ Roll to Reggae. There has been no looking back ever since and from club circuits and concerts to friendly gigs; the band has done it all, with Rakesh Baruah as their constant companion.

Suman Dutta, another member of Moonwind, who was also a very close friend of Mr. Baruah recalls his early days with Baruah, whom he had known way back since 1978 when they were young table tennis players. Their love for music had grown and developed together, as Rakesh Baruah had taken up bass guitar as a hobby while Dutta had started humming a few lines. “A very passionate and crafted bass player; Rakesh was a true performer, a fire on stage and his bass notes used to haunt many singers. Wherever we travelled in India, Rakesh with his bass guitar was an instant hit. He treated his fellow musicians with respect and cared for the young generation. Rakesh was ever smiling and his jokes were one of its kind.  I, along with the other band members Rajib, Pom, Mrinmoyee (Tuk Tuk), Anower (Munu) and Santanu are in deep shock. Moonwind is bleeding and is shattered. We are sure it will take us some time to cover up the loss which we have undergone and also to fill up the vacuum created by Rakesh’s loss. We’re lucky enough to keep performing till his death did us apart.”

Indeed it is hard to believe that such a towering musical personality who was much revered across the North East is not with us anymore. To quote his friends, “Dancing around on the stage, the bass was an extension of his body; of his persona….he literally spoke through it, or sang through it. So flamboyant was his playing that many a times he would almost steal the thunder off the main act on stage.”

Mr. Baruah is survived by his two daughters, young Lopa and Diksha. All his family members, friends and well wishers are still in deep shock, and are aggrieved by his death. It is a big loss of not only a very talented musician, but the loss of a very true human being; someone who was a source of joy and inspiration to many.  A few of his close friends, admirers and well wishers have sent him their sincere tributes and a few last words:

Pawan Rasaily: “Rakesh embraced life full on and wanted to live it to the hilt. A very warm and compassionate person, he was deeply observant of other people, of their feelings of their sentiments….A pioneering bass player of not only the North East, but of India, he understood the importance of tone and laid great emphasis of extracting the same. He was a rooted player in the very traditional sense and played bass the actual way it was meant to be. His playing has inspired countless musicians. It is an immense loss.”

Abani Tanti: “Rakesh was a friend, a brother and a part of my life. He was my musical inspiration, analyzer, critic and a part of all the projects I worked on. He was a positive presence, a stress buster. He would find ways of making me smile even when I was down. Though he was childlike, he could be the most sincere person when it came to professional situations. Will be missed…”

Manas Choudhury:  “Rakesh Da, the Bassist was my childhood bass hero. His grounded in the pocket bass playing never failed to inspire me. What a charming personality he was! Always smiling, cool, chilled and loving. He was new age, forever young at heart, always helping, supporting the youngsters, musicians and friends. His early departure definitely creates a vacuum in the modern Assamese music scene and in our lives for sure. We miss you Rakesh Da.”

Ibson Lal Baruah: “Words fail me. It is a huge loss to our musical community. I will cherish the memories we had.”

Joi Barua: “Rakesh da was a well wisher and immensely believed in our music. He wanted to play concerts with us, tour with us and so much more. It is a tragedy of unimaginable proportions. We’ve lost an irreplaceable musician; a wizard of the bass. The sadness is numbing, but also builds up a resolve to carry his legacy forward…”

Jitul Sonowal: “Rakesh was not only a musical maestro, but also a very honest man, extremely straightforward, very lively, inspiring, and jolly and a very true human being. I have lost a close and a very true friend. I miss the times spent with him, his music and its melody.”

Kalyan Baruah: “Rakesh was one of my closest friends. I literally grew up with him. We played together, performed together and lived life together. I still cannot believe that he is no more with us. Just two days before his death we had talked over the phone and he was at his jovial best, laughing and cracking jokes. It was ironical that Rakesh, who always had the fear of flying, had to meet this fate in a flight that was meant to be his last. Words are not enough to console his little girls Lopa and Diksha. I pray that his soul might find peace. “

On his last meeting with Satyakee D’com Bhuyan, Rakesh Baruah had said, “I have played many diverse musical styles, and I specialize in Rock & Roll. I look forward to use my enthusiasm for the bass, and all things musical to inspire and enthuse others to enjoy this adventure as much as I do, and to continue my creative career on a higher level.”

Rakesh Baruah, the man who created music and magic at the same time with his guitar, the most sought after  bassist of Assam, a loving father , a true friend and an idol to many musicians and music lovers, will definitely be missed by all. The Fried Eye team, along with the rest of his well wishers, prays for the peace of his departed soul and wishes our most sincere and heartfelt words of support to his family, that they might have the courage and strength to face life ahead of them and live it the way Rakesh da would have wanted them to. Without a doubt, he lived like a rockstar and died like one.

Joi: Looking Out of The Window
Bob Marley Tribute Concert