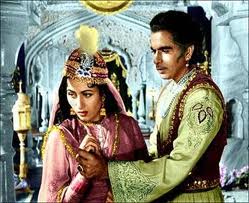 Gossip over news, break ups over mush… Well let’s admit it, for the third person a failed love story of another individual is usually more entertaining that a perfect one. Goes without saying, if the story happens to be of a star, it is talked about much more. That would be an easy explanation to why break ups of Salman Khan and Aishwarya Rai, Bipasha Basu and John Abraham etc have attracted such levels of curiosity. Here are some stories you may or may not have heard of; stories that could not stand the tests of time, or luck! Dilip Kumar and Madhubala  Dilip Kumar and Madhubala had declared their relationship when they walked in together to the premiere of Kumar’s film Insaniyat (1955). But their relationship had started much before that. The relationship virtually ended when Dilip Kumar testified against Madhubala and her father Ataullah Khan in the court, siding with producer BR Chopra who had filed a case against the actress for walking out of his film Naya Daur. BR Chopra wanted to shoot in Bhopal and Madhubala’s father was dead against any outdoor shoot as a result of which the actress had to back out of the film. In the court Dilip Kumar testified that it was not exactly professional on Madhubala’s part. Apparently Madhubala continued to love Kumar and only asked him to apologize to her father. The thespian was in no mood to bend. A heart-broken Madhubala went on to marry Kishore Kumar on a rebound. But according to her    sister Madhur Bhushan, the diva loved Dilip Kumar right till the end of a short life. . Dev Anand and Suraiyaa– The effervescent Dev Anand had once said in an interview, to a well known film magazine, one of the rare occasions that he had cried was when his love story with Suraiyaa did not work out. As a struggling actor Dev Anand would admire Suraiyaa who was already a star. They worked together and soon Suraiyaa too fell in love. But like the typical Bollywood love story, this one had its extraordinary villain – Suraiyaa’s grandmother. The stoic elderly lady was not impressed by Dev and made sure the romance ended in as dramatic a way as it started! Suraiyaa was in fact forced stop any sort of communication with Dev and the granny also ensured that they never worked again together – through force and emotional blackmail put together! Suraiyaa remained unmarried all her life while Dev married actress Kalpana Karthik, a marriage often referred to as a rebound for the actor! The ring that Dev gifted to Suraiyaa as a symbol of their love probably still lies in the heart of Arabian Sea after the actress threw it away into the waters.

Aamir Khan and Reena Dutta Not known to ever be in a hurry to do films, Aamir Khan’s marriage to Reena Dutta probably was one of the instances when the actor was so sure that he barely waited till he was 21! They were childhood friends turned lovers. But when Aamir figured that their families may create problems due to the religious differences he decided to elope with his lady love. Interestingly though he kept the marriage out of media’s attention for some time so that his ‘married’ status did not affect his female fan following! Everything was fine till one fine day, 15 years and two kids later, when they decided to call it quits! Reason attributed was “irreconcilable differences on account of temperamental differences”. Interestingly while Aamir went on to marry Kiran Rao, he continues to be friends with Reena . Another case when the actor was just trying to gain a foothold in the industry while the actress was already a huge star. But Saif Ali Khan and Amrita Singh’s love story had something more interesting – the age difference. Saif was five years younger to Amrita! But that was hardly a deterrent for a smitten Saif! He went ahead and married Amrita Singh in a secret ceremony despite family pressures and had built a happy family… till things went horribly wrong.

Some other such stories include Rajesh Khanna and Dimple Kapadia, Sanjay Dutt and Rhea Pillai, Abhishek Bachchan and Karisma Kapoor, Vivek Oberoi and Aishwarya Rai, Akshay Kumar and Shilpa Shetty… they had their own share of attention. Of course there are love stories which not only survived but could have films made on them too. Like the ones between Shammi Kapoor and Geeta Bali, Sunil Dutt and Nargis, Raj Babbar and Smita Patil, Rishi Kapoor and Neetu Singh. But then, that we will leave for another day to discuss!