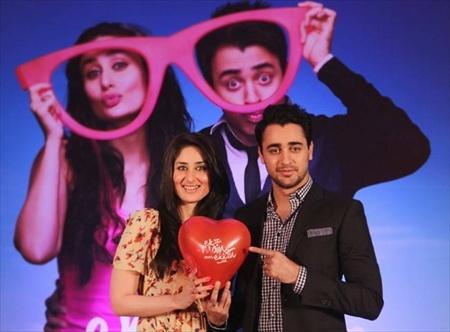 Love has this uncanny capability to change a person. And any such change is often enticing enough a story for on-screen adaptation. Therein lies the fundamental idea of Ek Main Aur Ekk Tu. But then filmmaking is little about the primary idea; rather it is about the way the idea is showcased – what we call the screenplay. And it is this very aspect that fails an almost sure-shot idea that EMAET is based on.

Karan Johar, who delivered the year’s first superhit with larger than life action drama Agneepath, surprises as EMAET fails to stand despite it being closer to his primary storytelling interests!

The problem with EMAET is that it fails to generate interest. That probably is caused by lack of interest shown by the writer in developing the story into a film! So what do we see? We see a cross between Wake Up! Sid, Bommarilu and Anjaana Anjaani! Rahul Kapoor (Imran Khan) is a nerd who has never taken a decision ever in his life. His clothes, food and profession have been dictated by his parents. Rahul meet Rihana – bubbly, independent, fun and adventurous. He is smitten and soon changes for the better. And in process falls in love.

The only good part of the film is probably the end. Not because the ordeal ends but because the director dares to walk into a terrain that usually is too scary for other filmmakers – the terrain of uncertainty! Before that of course there are some fun scenes and songs to keep you entertained just about enough to not knock you to sleep. Thankful for that!

Among other good things are performances. While Kareena looks and acts good, Imran shows he is maturing as an actor. This probably is his best work so far! The rest of the small cast live up to their roles.

Overall, Ek main Aur Ekk Tu would probably be a better DVD watch than at the theaters. But then since DVD will take some time to hit the market you might as well enjoy some other love stories in the comfort of your couches. You may of course try EMAET at the theatres if you are the adventurous types. But then if you belong to such a breed, why would you not try Steven Spielberg’s War Horse or the Bourne Legacy!