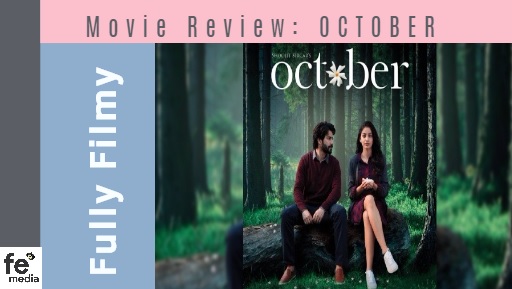 For most part of his career so far, Varun Dhawan has chosen to be the quintessential Bollywood hero, save one Badlapur. Which is why what he displays in October is not just refreshing, it surprises. As Dan, Varun takes on a garb of a person who could be rather annoying due to his inability to be practical enough. Dan’s simplicity is almost laughable. And yet, Varun adds an amazing level of likability to Dan, making him someone you could only root for, and probably fall in love with.

Varun shoulders the complexities of what Shoojit Sircar wishes to convey through October. And yet, the film is much beyond Dan. It is about life itself, complete with the uncertainties, the beauty and the despair… and hope. And it is about our ability to feel.

October is about Dan, and Shiuli. They are trainees in a five-star hotel in Delhi. Shiuli is almost prodigious, while Dan is unremarkable in what he does, despite his earnestness. These two barely interact and yet when Shiuli has an accident and falls into coma, Dan is affected in degrees unfathomable for most people. And that includes we as the audience. And this is where October faces its biggest challenge. In a world of people increasingly too caught up to feel for others, Dan comes as a jolt. He is almost unreal and makes us wonder what is wrong with him. Till Varun Dhawan finally wins you over… and makes us feel maybe it us who is the problem, not him.

His has made some extraordinary films, and yet with October, Shoojit Sircar surprises. As a director he is at his best. Sircar adds life to what Juhu Chaturvedi has beautifully written. Every shot, the music… almost everything speaks, together making the desired impact. Cinematographer Avik Mukhopadhyay uses steady shots to amazing effect, especially in the hospital, as he exposes the vulnerability of Shiuli’s family. Delhi winters have rarely looked better, even in the fog. The film in fact depends a lot of montages to build Dan’s character and speak for him when his not speaking. All of it well edited.

Also, while the film uses music well, this is not the regular film with songs. And despite not having songs to break the flow, like in usual Hindi flicks, October might come across as a tad slow. While it could be debated that the pace needed to be slow, so as to let the audience soak in what was on screen, it does get a little stretch at points. But then again, the screenplay lends itself to some beautiful light moments to keep the film going.

What also might come as a downer is the end of the film, almost annihilating what it seeks to preach. But then that’s probably the again the beauty of it. Of life as it is.

Banita Sandhu speaks without speaking and is an good find for Bollywood. But if there is something who leaves a mark, apart from Varun, it is Gitanjali Rao. Rao plays Shiuli’s mother, in what is her debut feature film. She is of course as rather well-known name in the theatre circuit and also been a director of some well awarded shorts. And it would be lovely to see her acting more often.

October is unlikely to be remembered as one of the year’s biggest success, commercially. But probably this will be one film that outlives many others. This is one film that will leave you overwhelmed and unsure how you feel about it, till you finally realise.

Note: If Judwaa 2 is your kind of entertainment, and you do not like deviations in that, maybe you could do ask someone to wake you up when October ends.