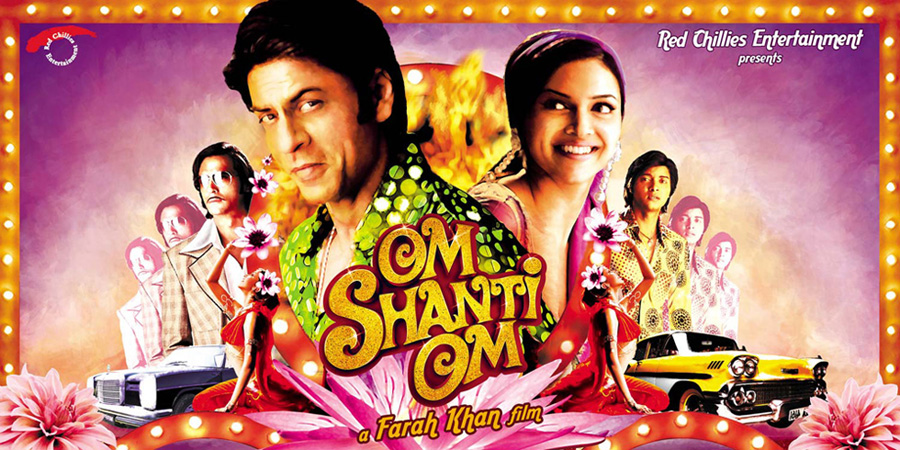 Movies on reincarnation have not really been accepted by audiences, be it the musical Karz or multi-starrer Kudrat that have both bitten dust. Karan Arjun is one example when the theme did well and Om Shanti Om is interesting because Shah Rukh tries it again and looks like he is certain to be the only actor with multiple hits in the same theme.

The story is about Om (Shah Rukh) who is a junior artist and falls in love with the superstar heroine Shantipriya (Deepika). He manages to become her friend after saving her from a fire but soon discovers that his lady love is actually married to a producer Mukesh Mehra (Arjun Rampal). But Mukesh wants to hide the marriage till his film is over because he understands that no one would be interested in watching a married heroine. But things get out of hand for him when he realizes that Shantipriya is pregnant. He burns her alive at the sets of his film so that his dream of becoming the biggest name in the industry isn’t hampered. Om is killed in it too while he tries to save the lady.

Flash Forward 30 years later Om is back and this time as the fire-fearing superstar. As other rebirth movies, Om too is haunted by visuals when he sees a fire. And soon he remembers all and is determined that his ‘punar janam’ be for a purpose. (Kahani abhi baaki hai mere dost!) He sets out to restart the stalled film on the same set where Shantipriya was murdered and gets Mukesh to agree to produce it. But Mukesh wants a proper replacement for Shantipriya. And bingo! Om gets one.

The first half, which shows the typical 70s, is overdramatic in every aspect and takes you on a nostalgic trip. The dialogues are very appropriate and so is the way they are delivered. But it does get overboard at times in terms of the present day. The second half starts off with some abrupt cuts but quickly picks up and moves smoothly towards a very twisted end. 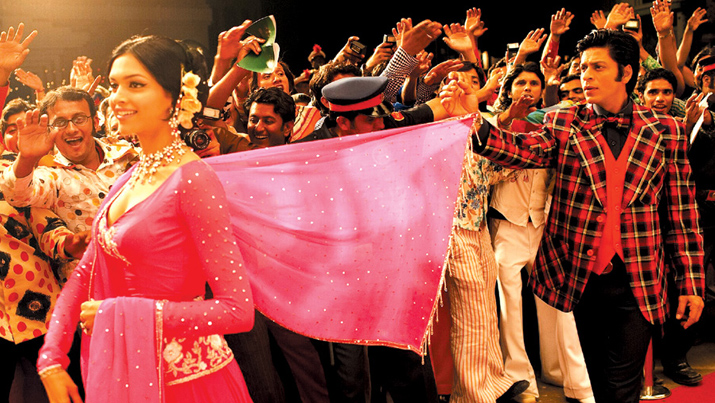 From the production point of view, Om Shanti Om has good photography, sets, and background music. The playback music is a highlight with the choreography just helping the cause. The 31-star song is one of the highlights of the movie. Every soul in the theatre would be excited to see so many past and present stars in one song and all of them enacting a trademark step.

However, all these praises don’t make Om Shanti Om a flawless film. In fact, it has plenty. The dialogues do get monotonous. The story lacks newness. There is visible abruptness here and there, especially when Om realizes his rebirth and he meeting his mother of the previous birth. Also Sandy’s – who is Shantipriya’s look-alike – casual attitude about her acting despite the fact that she had come for an audition is not digestible. And yes, Shah Rukh’s hair suddenly got longer during the song Dard–e-disco. Cinematic liberty?

Acting wise Shah Rukh is back to his melodramatic self. Shreyas is good in the first half. The second half hardly offers him any scope and reduces him to a junior artist. Kirron Kher too is made overact, which she does. Arjun Rampal underplays his role and is good. Which brings us to Deepika – This one is a revelation and a find. She shows the capability to develop into a good actress.

Overall, you got to give this one to Farah Khan for being so honest that her’s is a masala movie and she has no qualms about it. The movie consists of all the elements that are essentially called the ‘navratnas’ of Indian cinema – from joy to grief to romance to revenge. And she mixes these well to cook up a potboiler, which is sure to be a runaway hit.

And yes, this one has the Farah Khan of end credits. All those who are related are shown on screen right from Gauri Khan to spot boys. Enough to keep people at the seats even during the end credits!