To tell the truth, I walked into the theatre expecting a rather dull affair. The trailer of Golmaal Again is, for the lack of better words, one of the dullest trailers I have seen in a while. It lacked punch and just did not induce enough interest. The film looked stuck somewhere between Chennai Express and Golmaal. Probably that’s why this Rohit Shetty movie got me surprised, pleasantly.

An hour into this two-and half-hour-long film I had realised I had tears in my eyes from the constant laughter. And that is rather interesting because I was just watching the same old characters doing what they are known for. In fact, at times it felt that the writers were under extra pressure to include certain characters just for because they were popular in the earlier films. For example, Johnny Lever’s characters of Pappi serves no purpose at all. The film gets more serious and emotional post interval after the madcap first half. This is when, like most Rohit Shetty films, the story unfolds.

At its crux, Golmaal Again finds an emotional connect, much like the first Golmaal (2006). This film is about something sinister being planned by certain people that will affect the children of an orphanage. This is the orphanage where our leading men – Gopal, Madhav, Lucky and the two Lakshman – were raised by a rich philanthropist. As the five now return to the orphanage to be a part of the last rites of the old man, they encounter something supernatural.

The screenplay of Golmaal Again would not be termed exemplary by any standards. It barely manages to pull together all characters into one story. And at points, especially in the second half, it feels like a drag and a futile exercise. Ironically, it is the characters and the dialogues that save the day. 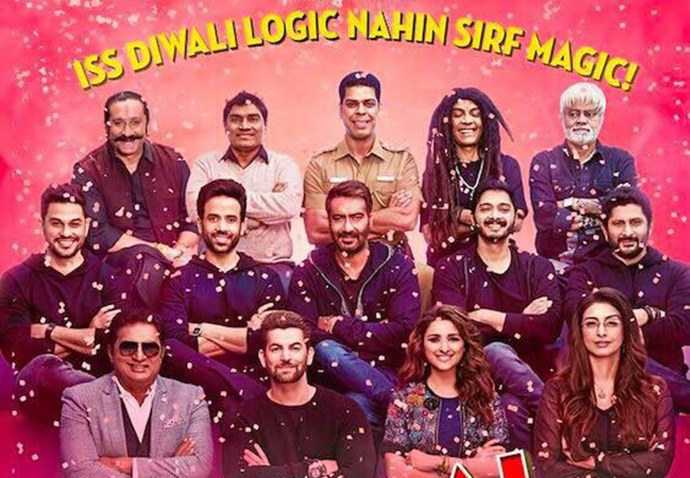 This is the first time Rohit Shetty has moved out of Goa for the Golmaal series and he chooses the locales of Ooty and Coonoor as the backdrop. That along with the two leading ladies – Tabu and Parineeti brings in a lot of freshness. This is one Rohit Shetty film where you do not have cars flying around. Instead, there are flying books. It is also interesting to see a usually macho Ajay Devgn scared of ghosts. He holds the fort. The usually hysterical Arshad Warsi does not get much scope, a side effect of having too many characters. Kunal Kemmu and Shreyas Talpade have more to do than Arshad and they do not let down. And of course, there is Tusshar Kapoor, who for once gets a scene with dialogues. But more importantly, there is the delightful Sanjai Mishra. Not to forget the surprise package – Neil Nitin Mukesh.

Golmaal Again is mounted on a massive canvas. The camera captures the picturesque terrains of Nilgiri hills in the state of Tamil Nadu. And you’re a bulk of colours splashed the screen. These add a certain flavour that was otherwise non-existent in the earlier Golmaal films, which barely had the scope of showcasing locations.

Overall, Golmaal Again is the kind of film that would figure abysmally low in the list of plots that make sense, but pretty high on entertainment quotient. This will go on to become one of those films that do exceptionally well on television broadcasts. Go watch if mindless fun and laughter is what you seek as your Diwali family outing!