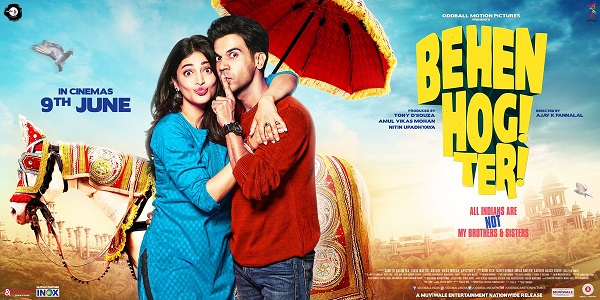 ‘All Indians are my brothers and sisters’, reads the preamble of the Indian constitution. And this has lead to a zillion hotel jokes. Behen Hogi Teri takes the same joke up, coupled with the terror of the popular festival Raksha Bandhan among young guys. This is a film dipped in humour that is indigenous to India, making it rather relatable.

Behen Hogi Teri takes us into a middle-class colony in Lucknow, where houses are separated by a small lane and neighbours are like family. So much like family that kids in the colony are considering siblings! And Gattu (Rajkummar Rao) has dreaded being called his neighbor Binny’s (Shruti Haasan) brother all his life because he has loved her since he was barely 10. Hence on every Raksha Bandhan day Gattu like most of his friends, would quietly slip out of his house and pass his day in hiding.

There is a good amount of humour as the writer-director sets up the plot. The characters have their own quirks making them funny. For example, the father of Gattu has his own ambitions in life. He wants to become the president of the colony society and he rises to grab an opportunity when it arises. Then there is Binny’s elder brother who does not quite know when to hold back. It is evident that the writers Vinit Vyas and Rajat Nonia know the characters inside out.

The first half is hence breezy and completely fun, although the love story is not quite developed well. The way Gattu uses a funeral to get close to his lady love is hilarious. Things go wrong in the second half when the writing moves towards the resolution of the conflict that has been set up. The screenplay inadvertently moves to the Priyadarshan space, towards a chaos. Also, a couple of scenes go on and on till you almost yawn. These possibly looked great on paper, but just did not translate well enough on screen.

Yet, Behen Hogi Teri entertains. And that primarily because of the characters and the performances. This film may not allow Rajkummar Rao the scope that his last film Trapped did as an actor, but he takes every possible moment makes it worth watching. Here’s one actor who never seems to fail, and are we glad! Darshan Jariwala, as the father of Gattu, is as good. Gulshan Grover as Dhappi Dada is a laugh riot. And so is Herry Tangri, last seen as Yuvraj Singh in MS Dhoni. Here he plays Gattu’s closest friend.

Shruti Haasan is probably the only misfit, at times looking much older than Rajkummar Rao. Sadly for her, her part is also sketchy in comparison to what Rajkummar gets.

Also working for the film are the dialogues, which really helps it get the milieu right. This is Ajay Pannalal’s first Hindi feature film. It is nice to see filmmakers delving into the small Indian towns to find stories and the inherent humour they holds.

Behen Hogi Teri could have been a far better film if it was only better written. What it ends up being in one more victim of the second half jinx. Nonetheless, the film could still be watched for Rajkummar Rao’s abilities and the super funny dialogues.

Movie Review: Konkona Sen Sharma’s A Death In The Gunj