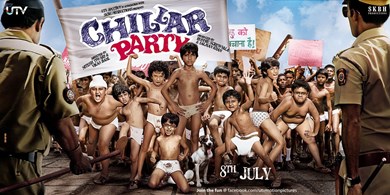 After the success of the small budget children’s movie Stanley Ka Dabba; Chillar Party another small movie with little kids and a big message, hit the screens on the 8th of July 2011. The promos of the movie had successfully caught the attention of the viewers by dint of the brand name of Salman Khan Being Human Productions and the item number Tai Tai Phish by Ranbir Singh at the end of the movie. However, in the movie, the real heroes were the eight school going kids of Chandan Nagar Society, who were better known in the colony as the Chillar party.

With a very interesting style of narration, the movie opens with a unique introduction of the kids, who have been given different nicknames like Jhangia, Silencer, Aflatoon, Shaolin, Encyclopaedia etc. and each of whom has a different story to tell. Each one has a characteristic which makes them endearing, funny, and downright adorable. The kids, as a group, are strongly knit together and they live in a world of their own. When a homeless kid named Fatka enters the society as a domestic help along with his dog Bhidu, the kids try to get rid of him considering him and his dog as a threat to their reign in the society. But after an initial friction, the kids accept Fatka as a member of their group and become inseparable friends.  The real story starts with the entry of the local politician Bhide (played by Shashank Shinde), who during his visit to the Chandan Nagar society get entangled in a riff with Fatka and his dog, and orders all stray dogs in the city to be done away with, including Bhidu. The kids stand up to save Fatka and Bhidu and start their own revolution against the society and the politician. A part of this was the Chaddi March, in which hundreds of children in Mumbai stripped down to their chaddis and joined the Chillar Party and marched all throughout the city protesting against Bhinde and the society.

One of the best traits of the movie, apart from the entertaining style of storytelling is its simplicity and the message that is conveyed, with the innocence of the children kept very much intact. The issue, as small as that of a stray dog losing its only shelter has been used wisely to convey yet another bigger message; i.e about the right of the children to actually stand up to something, and about the power they possess in the process of bringing changes to the society. The movie also portrays effectively the realities of life like how child labours are employed and how they are treated. The entire movie is narrated from the children’s point of view, but it deals very strongly with the issues related to the adults in the society. The performances of all the kids, though being their debuts, stand at a very high level and are more than enough to keep the audience glued to the screen without losing a wee bit of their interest. They are amazingly natural and confident. Special mention must be made of Naman Jain, who played Jhangia,- the kid who hated wearing his underwear, was the life of the movie. He had some of the best lines and the funniest scenes to his credit.

Each character had a specific role to play, and each of them was created by Vikash Bahl and Nitesh Tiwari with a purpose in mind. Not a single scene in the movie was unnecessary and the flow of the script was very smooth.

Like every other movie, Chillar Party had certain loopholes as well. In the second half of the movie, the narrative changes its original track and becomes a little contrived. Moreover, the issue that is taken up is not something that everyone alike can identify with and depends on each person’s own perception. The music was quite average and other than Tai Tai Phish and Chatte Batte, the other songs could not gain much popularity. Also, the placing of Tai Tai Phish along with the end credits instead of somewhere in the middle or beginning of the movie is like a waste of the song, since most people leave the hall once the end credits appear.

Over all, the movie is very fresh in every aspect. The idea of a Chaddi march as a device of revolution is a very original idea. With fresh concepts, new faces and unique style, Chillar Party emerges as a film that can inspire many more such children’s movies with meaningful messages. Full of fun, comedy, entertainment, emotions and love, Chillar Party is indeed a must watch for all. After all, we all do need a change, don’t we?