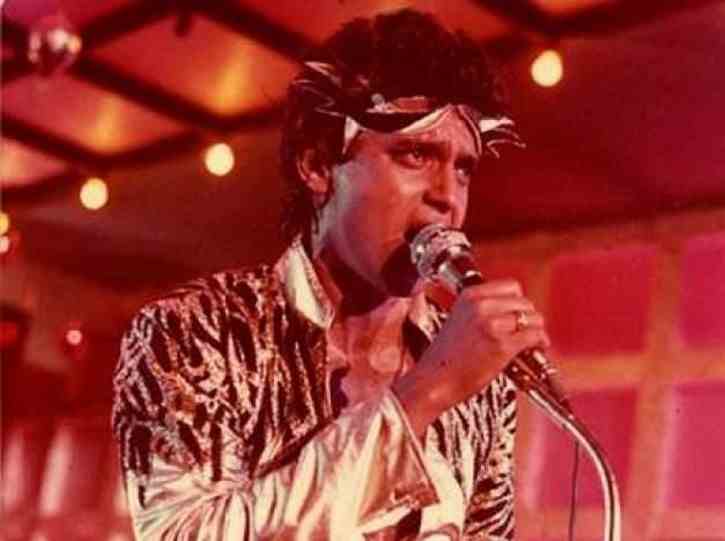 Recently the Disco music genre in Bollywood had a revival with the likes of Koi Kahe from Dil Chahta Hai and It’s The Time to Disco from Kabhi Alvida Na kehna, but it was never the same like the disco wave we had in the Eighties.

Disco hit the Indian movie scene in the Eighties with Aap Jaisa Koi from Qurbani and Om Shanti Om from Karz, but some do argue that the Karz one was not exactly a classic disco number. It captured the imagination of the young and some young-at-heart-old too, instantly for its new sounds and psychedelic, vibrant newness not to mention the catchy beats. It even seemed more interesting than the western influenced songs (as in rock and roll and the twists ) of the sixties and seventies. But just as it was quick to catch on, it was even quicker to disappear barely lasting the decade. However even in that seemingly brief period we did have some memorable numbers, and musicians who almost reached cult status.

Let’s no more delay the playlist for today with the statistics which I am sure you can easily look up in Wiki and other entertainment media sites and just get started with a bang… no I mean Boom.

I am not speaking of the Boom Boom remix of the nineties but the original one from the movie Star starring Rati Agnihotri and Kumar Gaurav right after his super success of Love Story. Personally I feel that nobody could capture the true ‘disco’ feel like Biddu . A Biddu and Nazia Hasaan combination could transport a song completely to a different level from the rest of the contemporary music directors however nondescript the movie as a whole appeared, no disrespect to them.

The movie though not much of a directorial success, did capture the song Boom boom near perfectly. The ambience, costumes, lighting and the stylishly skinny Rati along with the fabulous music does give a perfect Disco mood to it.

Aap Jaise Koi was the song that ushered in the Disco revolution. It grabbed the eyeballs in a big manner, as much as in shock as in delight. Zeenat Aman sizzled in the song, and the song became a mega hit in spite of the disapproving stares from our elders. It again was a Biddu-Nazia Hasaan combination , a name that became synonymous with the genre.

I am a Disco Dancer

…And then came Mithun Da and Bappi Lahiri to bring to us the Bollywoodised disco genre. While Biddu tried to remain true to it, Bappi da did give a Bollywood flavor to the music which was more relatable to the average listeners of those times. Disco Dancer came to be acknowledged as the peak of the disco wave, the ultimate tribute to the genre. It is difficult to choose one song from the movie collection as each had the distinctive flavor, but I will go for the number ‘I am a disco dancer’. It is a lengthy one I admit but has a range of variations in the single song and the video is equally energetic and full of the ‘works’

A disco item song in the movie Namak Halal was akin to the lone cabaret numbers that were usually thrown in family dramas just for the sake of it. But let’s not get into a debate on whether the introduction of the song is justified or not and instead enjoy this lovely number which had all the trappings of a good one of its kind.

Bappi Lahiri had by 1984, established himself in this genre. The movie Kasam Paida Karne Wale ki, though a revenge saga, has all the songs in the disco theme. In this movie Bappi Lahiri has utilized Salma Aagha’s unique voice to the fullest for the desired effects. The visual of the song is as glitzy as it can get with Salma Agha looking just what she was not in Nikaah her debut movie.

Om Shanti Om from the movie Karz was released at the same time as that of Aap Jaisa koi from Qurbani. Though not as true as the one from Qurbani to the genre it still had flashes of it in it. The song was equally loved and accepted however and became sort of a cult classic. Rishi Kumar maybe no Mithun Chakravarty as far as disco is concerned, but he looked the part of Monty the musician. In fact he was so energetic and perfect that he rocked!(pun intended)

Bollywood has a beautiful way of experimenting with conventional themes, be it music or plots. So we have this sort of fusion disco number from Sanam Teri kasam from none other than the king of experimentation – RD Burman. Both the music and the movie was a huge hit and Nisha aha ha aha does bring back fond memories of shiny disco balls, sequined dresses, plenty of bling and synthesizers.

Armaan was a quickly forgotten film probably because of the lackluster performance by the lead pair probably, but the songs did get noticed . Usha Uthup as usual was her fabulous best in Ramba ho while Sharon Prabhakar was a pleasant surprise in the song Oh meri jaise haseena. I have always had a soft corner for Usha Uthup for her powerful throaty vocals and her never ending energy levels, but here I will overrule her number in favour of the Sharon Prabhakar one, simply because I am also taking the ambience of the video into account. While Ramba ho is a completely carnival number as the song title suggests, Oh meri jaisee haseena has been sung in a bar,complete with all the setting of a disco number

Now now now! Isn’t the combination a total surprise? Rajesh Roshan? Lata Mangeshkar? But they do complete justice to the music and yes, a disco playlist without the number Disco 82 would be so incomplete. I was a bit in a dilemma whether to include Disco Station or this one, but finally Disco 82 won it with a slighter edge . Call it my prejudice , but I am more biased towards newer sounds and experimentations. Disco 82 wins with the sitar portion of the song.

Now this movie Zamane Ko Dikhane Hai was a complete dud at the box office. The number Hoga Tumse Pyara Kaun was a hit and a consolation, but I still wonder why the songs were never mentioned as much as they deserved because I find them to be out of the world. I haven’t watched the movie, and I have just seen posters of songs, which I used to find –grand! In fact the songs does give the image of the grandeur attempted- lavish sets, dazzling costumes and all. The number Bolo Bolo starts out as a non disco simple Bollywood number, but changes track and tempo completely in a while to something fast, something grand – into a beautiful fusion disco number –true to the style of the composer RD Burman; full of surprises that is. Say what you may, but I have to have this on my list.

So there were my memorable ten disco numbers, but Mani and ten? Only ten? Impossible!

So here’s the bonus one- As a tribute to the one and only Nazia Hasaan , the queen of Disco in Indian music. The song is not a movie number but, this is one number sort of sums everything up and one that all disco fans should swear by.

Disco Deewane hain it is !