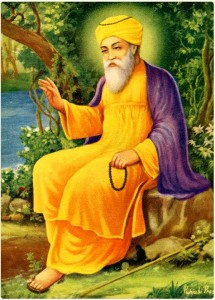 While biopics are being made in quite a few numbers, Nanak Shah Fakir is one that stands out by quite a margin. This is the first time the story of Guru Nanak is being attempted to be told on the big screen and the makers have managed to keep it a rather hush affair so far. This movie has also generated some interest as it sees Oscar winning Resul Pookutty turn a producer.  However we managed to get some information on the film from one of the lead actors, Adil Hussain.

Talking about the film Adil, known for his roles in movies such as Life of Pi, English Vinglish and Agent Vinod , says, “Nanak Shah Fakir is a very interesting film. It showcases Guru Nanak’s journey to finding peace. However since no one is allowed to play the character of Guru Nanak, the film does not show his face. The film has been directed by Sartaj Singh Pannu and I think he has done a fantastic job in the way he has pieced together the film.” The actor apparently plays the character of Rai Bhullar in film. “I play the character of Rai Bhullar. He is the man who dreamt that a great person is going to be born. He is a rich guy who takes care of his Guru Nanak when is born,” he informs.  Along with the life of Guru Nanak, the film apparently also traces the evolution of Sikhism.

A distributor cut of Nanak Shah Fakir was also showcased at the recently concluded Cannes Film Festival. Resul Pookutty is currently completing the sound design in his own studio. Reports also suggest that AR Rahman is involved with the background music of the film, which is being composed by Finnish composer Tuomas Kantelinen. The film also stars some other veteran actors like Tom Alter and Arif Zakaria. The director, Sartaj Singh Pannu had earlier made an independent film called Soch Lo which had received much acclaim.