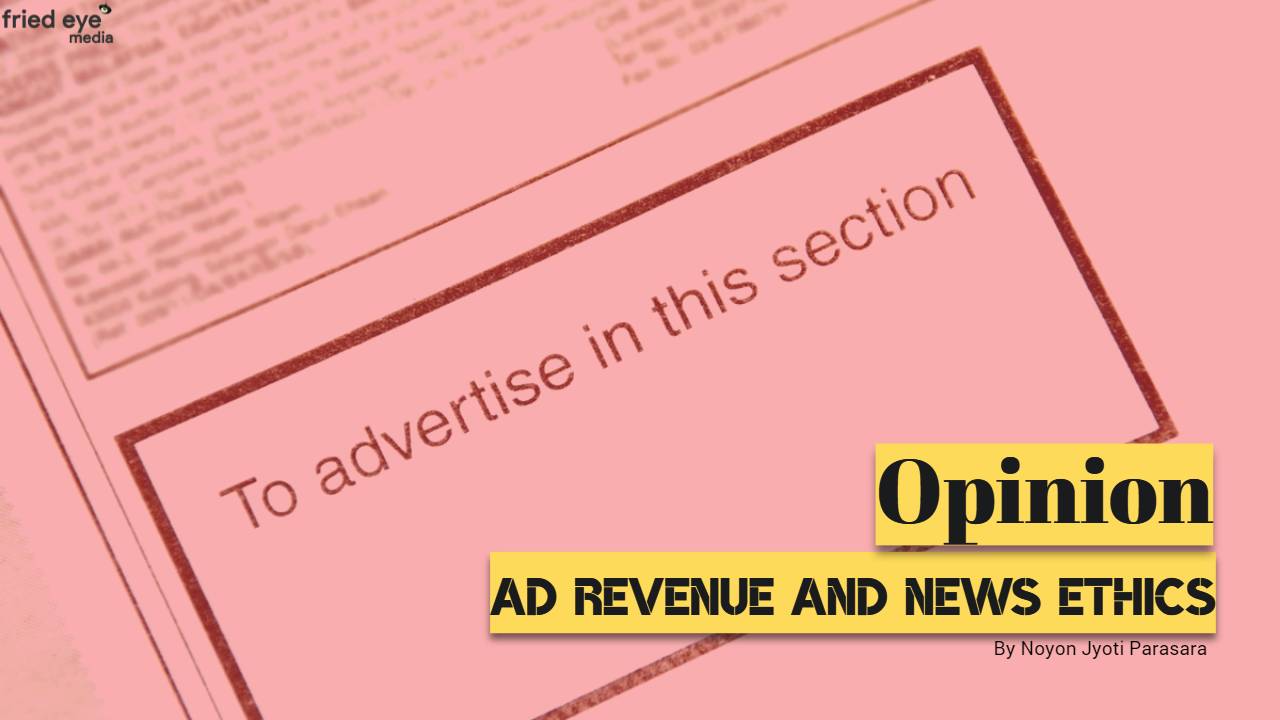 September 6, 2021 Off By Noyon Jyoti Parasara

Do accepting advertisements compromise the intent of a media house? If you go by Newslaundry, the answer would be affirmative. But that could not be any further from the truth.

Let me clarify upfront. I really like watching Newsance, the weekly show by Newslaundry. It is entertaining, yes. But more importantly, it helps me catch up on all the madness in news television that I usually miss because of consciously keeping away from it. My primary source of news has been credible websites and Youtube channels for quite some time now. I recommend Google’s news app, apart from Twitter. Newsance hence becomes my window to all the madness that I had chosen to walk away from some years back. In many ways, it assures me I had been wise when I quit.

But that’s about it. That’s all that Newsance has done for me. Rather the show has been the single most significant reason I never paid for a NewsLaundry subscription. Why? Because Newslaundry has always chosen to shame other media outlets and even advertisers who chose to spend money on these media outlets.

And if that was not enough, a recent episode of Newsance hosted by the versatile Abhinandan Sekhri went on to expose how little about the media team Newslaudry probably understands, unless it’s a deliberate attempt to spread misconceptions. It was an episode where Sekhri decided to focus on a rant by Arnab Goswami in one of his 9 pm debates. Goswami had spoken about several new-age media outlets for a kind of reporting, calling attention to their business model.

This is what Arnab said – “Most of these digital news media outlets do not have a sustainable model. They survive on philanthropy, grants. They get almost no advertising. There is no sustainable business model. In that case, why is anyone pumping money into them? What is the agenda?”

Abhinandan of course found reasons to attack Arnab on this considering NewsLaundry claims to sustain entirely on subscriptions as a business model. But a quick check will tell you that well-known investor Mahesh Murthy funded NewsLaundry. And Murthy is not alone. Here’s a quick reference published on Newslaundry itself. Also, as mentioned in Crunchbase, Newslaundry is ‘for-profit” organisation.

Yes, they are here to make profits. And subscriptions are never enough because news organisations have expenses apart from newsgathering. Unless, of course, lakhs and not thousands pay for it.

Just a calculation, Newslaundry would have needed 1.5 lakh, people, to subscribe for their base pack for at least 1 month for the organisation to have provided returns their initial funding of Rs 4.5 crore (as recorded by Yourstory). And they would need to sustain the subscription base to function smoothly month on month. To this add data from Similarweb, which says the site got approximately 8 lakh visits in July 2021. The site has a bounce rate of 76.66%. The site also says that approximately 40% of the site’s visits come from search engines, which clearly indicates that these are not subscribers. Subscribers to a specific site would tend to visit the site multiple times for their fix of information. You could make an assessment of the monthly subscription on the basis of these numbers.

Indians are not known to pay for news. At least not the amount that is needed to run organisations. Not nearly enough to help pay journalists so that they can live a comfortable life. Never for multiple news organisations. So, if a person subscribes to one outlet, he is unlikely to subscribe to another. And that would mean it’s tough competition for every media organisation as they fight for a share of the subscriber pie. On an average, a newspaper costs less than Rs 5 a day while printing it is far more expensive. And there are other costs apart from the salaries of journalists. In fact, the salaries of journalists probably account for the smaller expenses in a news organisation. Yet to pay better salaries organisations need money from sources such as ads.

And if you question media houses that run on ads, you question not just Arnab Goswami and ilk but also the likes of The Hindu, The Telegraph, etc, which are very much on the same side of the ideological line that Newslaundry is on. Organisations that have a long legacy of powerful journalism that has contributed to genuine change. The Print is an example of a digital entity that also runs on ads apart from subscriptions, just like newspapers always have.

While subscription income is important, it will never be enough. Not nearly enough to sustain media houses across the country, with journalists from all states. Journalism is a service, but running the medium is a business. Because there are bills to pay apart from salaries of editors.

What Newslaundry and such outlets often forget to mention is that journalism runs on intent. And intent can be clear or compromised regardless of where the money comes from. And we have examples of both kinds. It is high time people get off those high horses and stop mindless blame games.