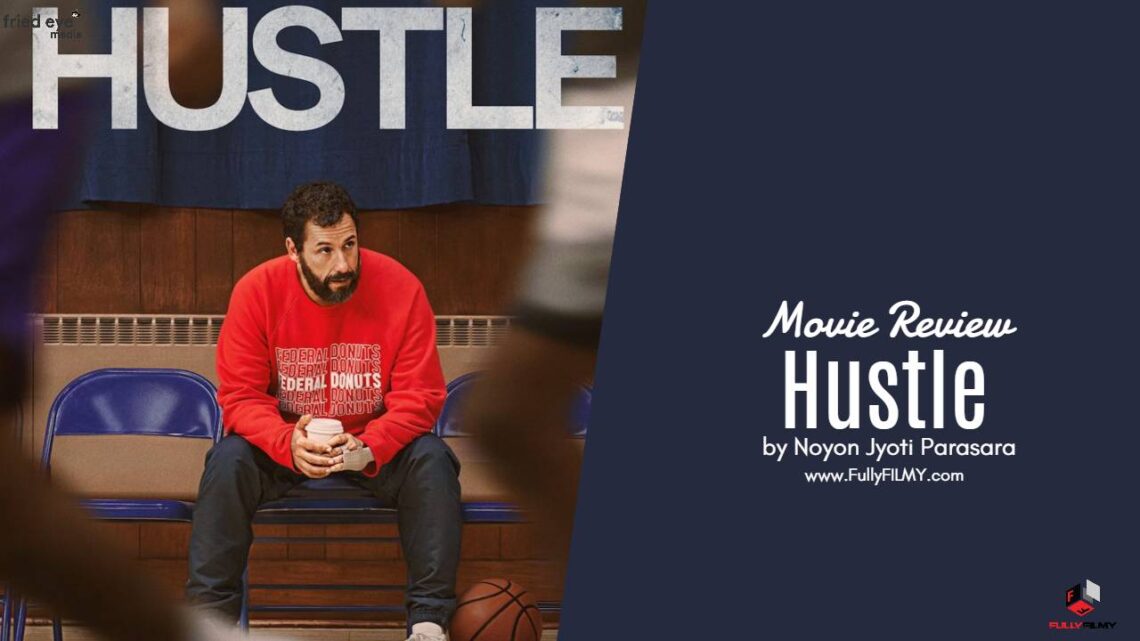 Though he has delivered films like Uncut Gems and The Meyerowitz Stories, Adam Sandler is not readily associated with movies that need him to do more than being himself.  This is why Hustle should surprise you.

Sandler’s Stanley Sugarman is a 50-something NBA scout working for the Philadelphia 76ers and aspires to be a coach. Stan’s belief in himself is challenged when he is pushed to a corner as he seeks to prove his latest find, a street talent from Spain could fit into the NBA. Of course, the genre dictates the underdog must triumph. Stan finds his way, but not before he is almost pushed to the brink.

Hustle plays on Obsession over talent. And the screenplay does not stop short of showing that – our hero’s unrelenting ambition of proving himself and his protégé right. Hustle also talks about the second chance and discarding judgmental attitudes. Both the protagonists aim at redemption. And there is never one moment when you doubt their abilities. You will root for them.

What works for Hustle is that is feels incredibly authentic. Almost like a docu-feature. The pitch is perfect. The cast is bang on. Spanish player Juancho Hernangomez plays Stan’s incredible find Bo Cruz, and he could be mistaken for a regular actor. Most of the supporting cast features famed basketball players including Kenny Smith, Anthony Edwards, Boban Marjanovic, Moe Wagner, and Julius Erving. This one almost feels like a peek into how the competitive world of the NBA. Not just about how hard players train to be where they are, but the management and the works.

And yet, it is Adam Sandler who stands out among all these. He commits to the characters, not just looking the part but making the desperation feel palpable. He has spent years on the road, sleeping in hotels, trying to find talents for his team, and missing important events in his own family. He longs to be with his family, spend time with his daughter as much as he wants to coach. At some level, it almost feels like the 55-year-old is aiming to find his own bit of respect as an actor, much like Stan.

Jeremiah Zagar’s Hustle aims to be a good sports movie. One of those which inspire you to no ends. And it passes the test with flying colours. Just like how its protagonists do. And if that is not enough, the end credits of the movie are gratifying. Watch it.

Hustle is a Netflix film.

Must have for NBA fans

Products you may love