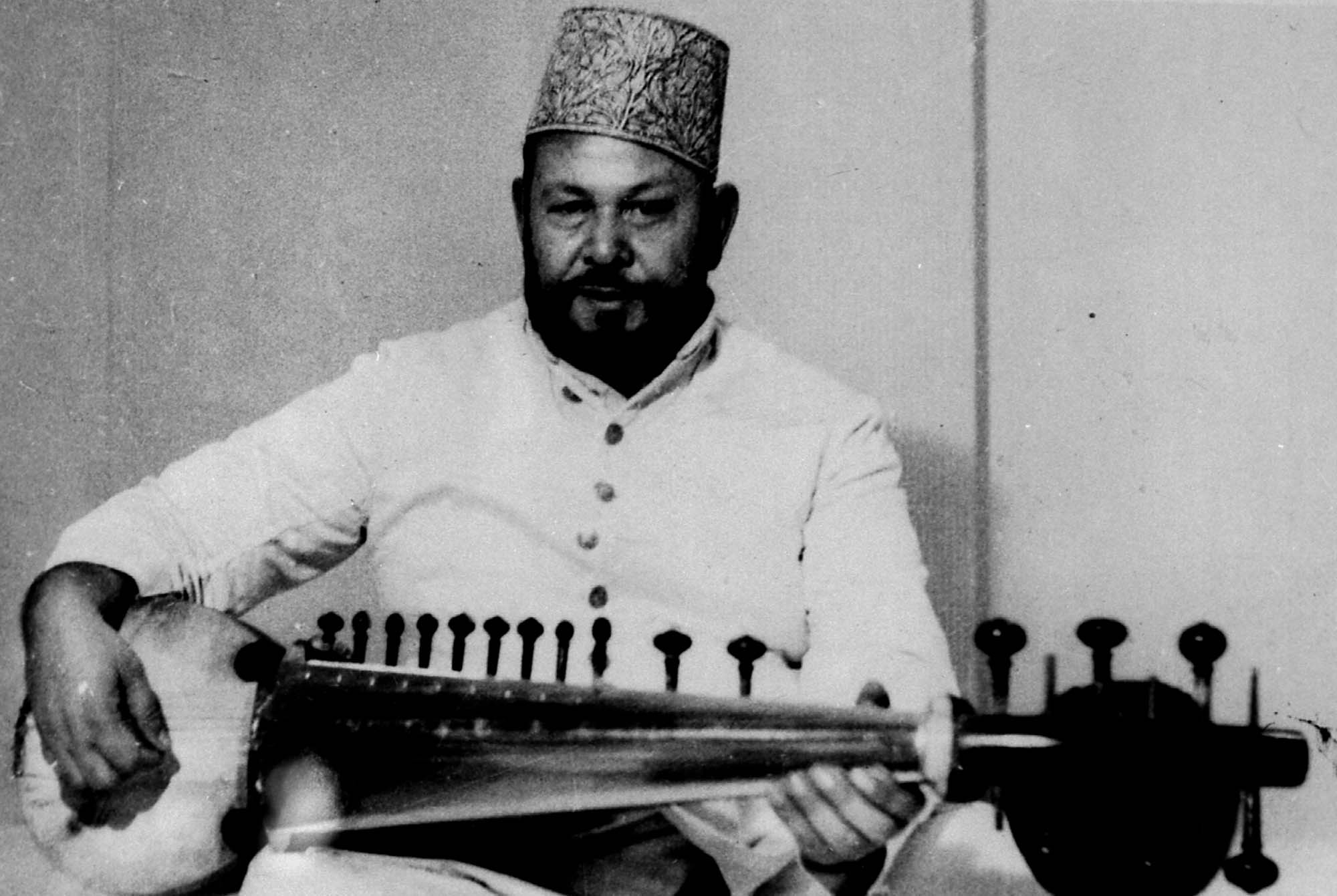 Ustad Haafiz Ali Khan was born in a house responsible for giving the Sarod its present shape and structure. The traditional style of music which today has become somewhat rare is called Dhrupad, where the use of embellishments does not exist. The usage was more of long glides both for vocalists and instrumentalists. He added to it the melodic possibilities of instrumental music in its complete dhrupad form. A rabab-oriented Sarod style, more staccato, more right hand than left, more mechanical than melodic was converted by Ustad Haafiz Ali Khan to a brilliant amalgam of feeling and cleanliness, heard only in the Rudra-Been and the Sursingaar of the descendants of Mian Tansen. Ustad Haafiz Ali Khan could make his sarod sing. This he did by a very advanced technique of the left-hand fingernails and a thorough understanding of the Raga pattern filtered through feeling and Aesthetic awareness. He could flower with tonal accuracy even when the string pitch went down by a quarter note or more. He was himself a great dhrupad singer and discovered a brilliantly coordinated and synchronized stroke sustainability in his sarod. With this, he could translate his vocal dhrupad lines in the otherwise metallic instrument of his ancestors, to a stream of aesthetic melody patterns.

Haafiz Ali Khan lived for Music. For my father, though, there was no question of a life outside music. Life itself was Music and Music was Life. And so I came to inherit from him the legacy of five generations of musicians as naturally as a bird taking to the air. His exquisite music was not just an artistic performance but a form of prayer. He was initiated in the tradition of the Senia Gharana by direct descendants of the line of Swami Haridas, Mian Tansen, and leaned at the feet of Ustad Wazir Khan of Rampur. Ustad Wazir Khan broke the convention of teaching only family members and accepted him as his disciple. Now a direct disciple of the Tansen School, Haafiz Ali Khan Saheb started flowering under the Ustad’s undiluted teaching. More knowledge enriched the already exposed brilliance of Haafiz Ali Khan Saheb and his strict adherence to vocal dhrupad made the veterans of his time looking at him with admiration. His performance together with his tonal richness and accuracy from instrumental music a status equivalent to vocal music; The melody-rich Sarod got an unthinkable status. 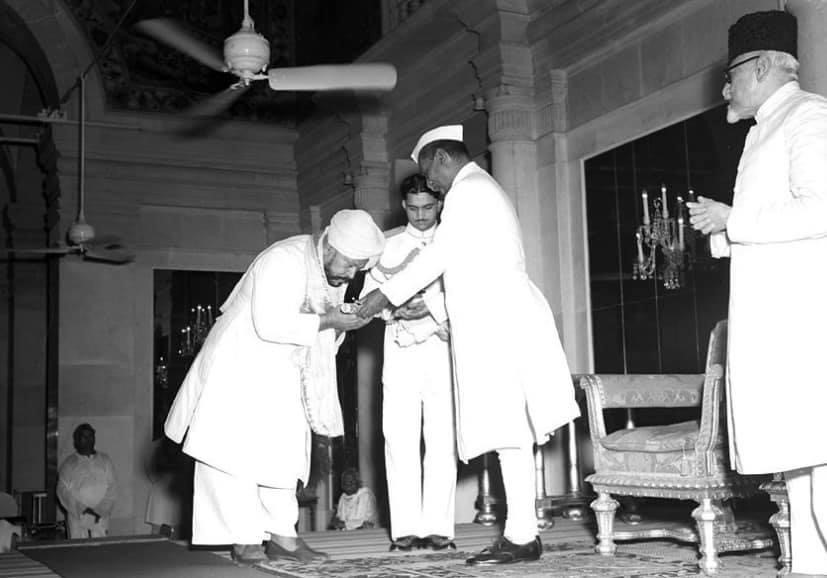 Ustad Haafiz Ali Khan was honoured with the title of Aftab-e-Sarod by the All Bengal Music Conference in Calcutta, the Sangeet Natak Akademi Award, and also received a fellowship of the Akademi. The Universities of Vishva Bharti and Khairagharh conferred doctorates on him. The Government of India conferred the award of Padma Bhushan in 1960. The true Godfather of Instrumental music of his times! Far ahead of his time, Ustad Haafiz Ali Khan realized the coming of the industrial age, its rapidity and its lack of leisure and want of time. He believed that rag music in its purity can only be preserved by precision. Stretching the raga too long will lead to irrelevant phrases, raga dilution, and deviation. Rabindra Nath Tagore also believed in this. Ustad Haafiz Ali Khan was the last musician who stuck to his dhrupad roots. He created the correct raga environment by playing dhrupad lines verbatim and then elaborated and expanded them. He will also be remembered as the last of the Senia dhrupad greats. Apart from his formidable command over traditional sarod compositions, dhrupad, and thumri, he was particularly appreciated in the Viceregal firmament of colonial India for his unique, stylized renditions of “God Save The King” on his sarod.

The Sarod Ghar-Museum of Musical Heritage in Gwalior, is a unique institution devoted to promoting Indian classical music, heritage and culture. Under the aegis of Haafiz Ali Khan Memorial Trust, through this ‘window’ to the past, music lovers can gain a better understanding of the evolution and history of Indian Classical Music and can get a deeper perspective and insight into the context of the art as it exists today. The aim of setting up this institution is to create awareness and respect for classical music, musicians and the variety of instruments of India. The road on which the museum stands has been named Haafiz Ali Khan Marg by the Govt. of Madhya Pradesh. The first instruments exhibited were the instruments belonging to his forefathers. Madhya Pradesh has had a whole history of great musical legends down memory lane . The great vocalist Ustad Amir Khan Saheb, Ustad Jahangir Khan Saheb, Ustad Abdul Haleem Jaffar Khan Saheb, Bharat Ratna Lata Mageshkar-ji are among the prominent aristes who belonged to the city of Indore. The city of Dewas gave birth to another two prominent personalities. Ustad Rajab Ali Khan and Pandit Kumar Gandharva. The legendary Hindi film playback Singer Kishore Kumar-ji and his brother the famous Ashok Kumar-ji also belonged to Khandawa .

A road in the name Ustad Haafiz Ali Khan Saheb was inaugurated by the Honourable Chief Minister, Smt. Sheila Dikshit few years ago at PWD Road. This is the 2nd entry road to Nizamuddin Railway Station. This is the only road named after an artist after Tansen and Thyagaraja in the capital city in 2011. The Kolkata Municipal Corporation also renamed New Park Street as Ustad Hafiz Ali Khan Sarani by chief minister Mamata Banerjee in 2013.

Having spanned over 90 years, my fathers was a life that connected the high points of the colonial era to the turbulence of our own times. Born sometimes in the 1880s at Gwalior where his father Nanneh Khan was court musician, Haafiz Ali Khan Saheb took great pride in the fact that it was his great grandfather, Ghulam Bandegi Khan Bangash, who turned his native Afghan rabab into what we know today as the sarod. Yet his thirst for knowledge took him to Pandits Chukha and Ganeshi Lai of Vrindaban, who were stern practitioners of the Dhrupad and then he went on to Rampur, where he became a disciple of the great Ustad Wazir Khan, the descendant of Tansen. My father left his impression not only in that provincial court but, more importantly, also in Calcutta, then the Imperial Capital. It was here that he received the love and adulation that was to endow him with the legendary status. Raichand Boral, who later rose to fame as the music Director of the New Theatres and the discoverer of K.L. Saigal, was more intimate and colorful in his reminiscences always told me that the first time my father came to his house in 1918, the Great war had just ended and a complacence was beginning to set in the music world of Bengal. ‘With his coming, we were suddenly confronted with a genius who almost rudely banished smugness, lethargy and tidy housekeeping.’ He discovered the link between dhrupad and thumri long before it was commented upon by others. To be able to see Haafiz Ali Khan in proper perspective in the words of Dr Narayana Menon was that Haafiz Ali Khan was the poet. Abba Saheb, as I called him, was a born extrovert, held his head high, brooked no nonsense from any quarter and walked the earth like a renaissance prince.

On the occasion of Ustad Haafiz Ali Khan Saheb’s 48th death anniversary, I pray to my father and guru, like every day. May his soul rest in peace! As I have written in my memoir about Ustad Haafiz Ali Khan (1877- December 28, 1972) that for me, the seven notes of music were him. He was the epitome of music. He was my inspiration, my reason of perspiration and he was my idea of representation.

When an Indian Maharaja saved a drought hit British village