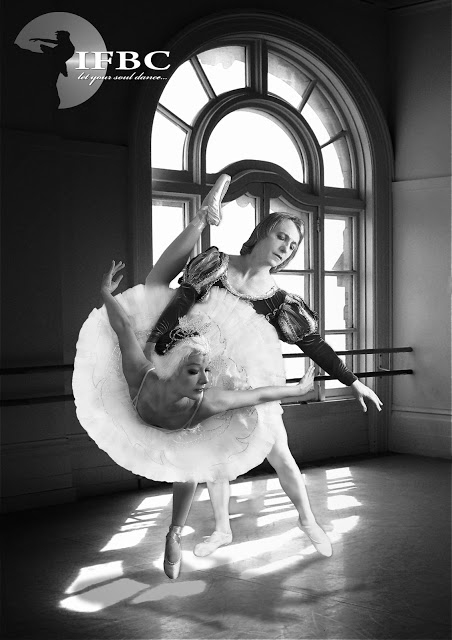 The first time I watched ballet was in Doordarshan, when there was a sort of cultural exchange with the then USSR and the ballet was a part of that goodwill gesture. It was Swan Lake on TV and synchronized gymnastics in my mind and heart. Yes my heart did multiple somersaults as the lithe and graceful dancers pirouetted and glided in the beautiful sets donning their dazzling tutus. I wanted to do it too, I could have probably, given the chance because they say I have a knack and the grace for dance and rhythm; The age was right too- six or maybe seven, except there was no ballet school during my times. 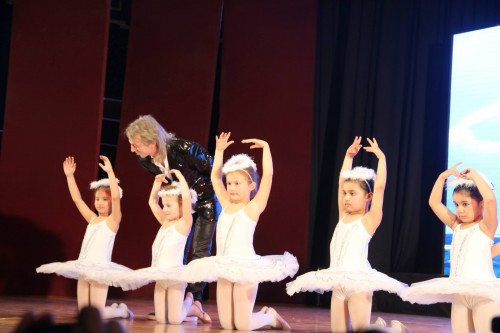 Decades later, I again searched for a ballet school, this time for my daughter. There were not many choices even then, but they existed and that is when the name Imperial Fernando Ballet Company came up -The only preparatory and performing ballet company in India. Well there lied the problem. There were teachers, great ones, who trained young ones in this particular form, but they did not perform in a company. And there were dance companies but they were not preparatory in the real sense, where as Mr Fernando , the multifaceted as well as multi talented director of IFBC puts it, one needs to nurture a dancer right from the initial stage and let it take shape like a tree gradually. 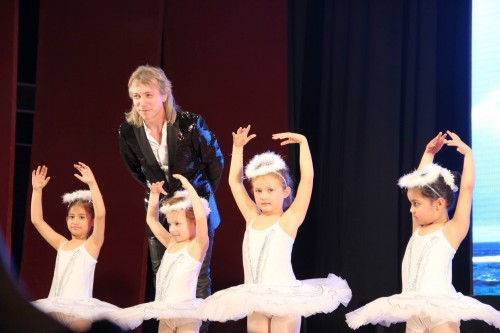 After witnessing his method and ideas for teaching the little ones the classical ballet , I was intrigued. Ballet was going to be my feature for Fried Eye I decided. Mr Fernando Aguilera graciously agreed to meet up. However there were some delays initially but we finally met in his studio at Green Park Delhi.

I was a bit anxious about the impending interview- Will the desi me, able to make an impact on the Argentine Mr Aguilera, who was the artistic director of the top ballet school and company in India? 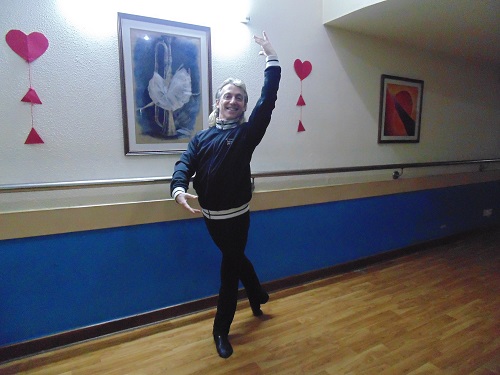 “And can he do the ballet dance?” I had asked. He just smiled, amused, his eyes twinkling in a mischievous delight and I knew then that this was going to be a delightful conversation.

I asked him about IFBC’s origins, which already had me wondering a lot , as Mr Aguilera was an accomplished ballet dancer in Argentina , had performed in many cities and was already teaching in his own school so I was curious why finally India?

“Even I am not sure why I came here” he replied with a soft laugh and then the stories poured forth. In 1997 he was here as a tourist and whenever he used to say that he was a ballet dancer to people out here, the invitations to teach would follow next. Those times as I have said, seriously lacked qualified ballet teachers. With so many requests from every quarters especially from the wife of Argentina’s ambassador herself, he initially conducted a two day workshop, which unexpectedly was a huge success. They wanted more, and he saw a potential, a challenge. Ballet with a background of Italy , France and Russia was a new concept in India. As familiar as we might be about Indian classical dances and its historical value, people here were completely unaware about the classical ballet, and Mr Aguilera saw a blank page where he could paint his own beautiful picture, create his destiny and this is how IFBC came to be -to train and turn out some of the finest dancers and performances.

Though he wished for a six month work visa in the beginning, the embassy however granted him a year to set shop and now when someone asks –where are you from, he proudly replies – “From India” 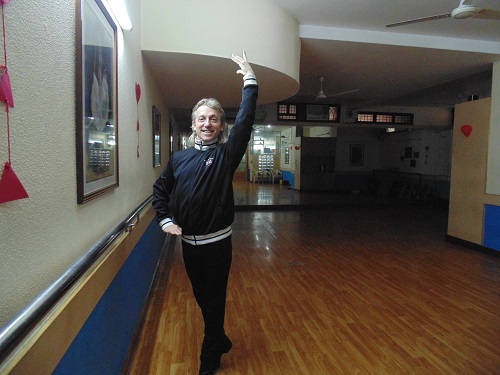 Enrolments were never a problem.. But he had to start from scratch literally, starting from even getting the tutus for the students, teaching French as all the terms used in ballet were French. But there was never a dearth of assignments even then. He taught pupils who aspired to take up dance as their career helping them to get into universities in Princeton and in London. He taught Ashley Lobo, the noted choreographer and the instructors of his school. He got invitations to choreograph corporate events and that is when he met Mohd Rafi, his present business partner, a young dynamic man who plays an active role in managing the business side, expansion and the marketing of IFBC. It was just the support that Mr Fernando needed then to take over the almost non-existent ballet scenario in Delhi by storm with almost no sponsors but just their own money.

“We are artists you know . We don’t know how to sell ourselves. I love what I am doing – teaching. So I just come and teach!” Though he confirmed it later, I was sure by then that he loved teaching more than any of the roles of a dancer and choreographer.

Corporate events helped them sustain as well as expand other than being creatively very challenging. “They know I am very expensive, but the kind of shows I do, nobody can do. They are different with different style of choreography. And I do fusions- ballet with traditional kathak, bharat natyam, contemporary”

Now they get invitations from all over India and from as far as Dubai to open centers- potential investors and sponsors, but Mr Fernando pragmatically chose to go slow at a pace that is manageable. 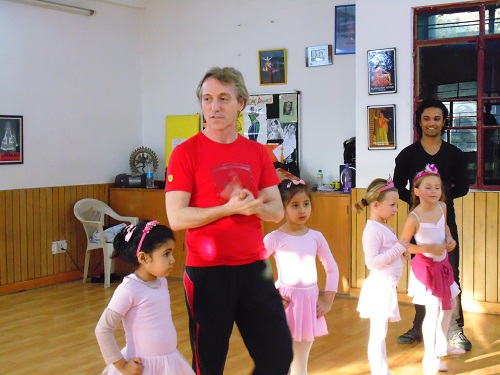 “It is not about what I want…It is a matter of time. I have to take care because if everything goes commercial, the artist part is gone..Its two years since I have been moving a lot between Mumbai and Delhi …and you have to make a lot of sacrifices” He has been getting many offers from Bollywood , a fact which he credits to Rafi for his never ending efforts to promote IFBC. Though a fully fledged number on the classical ballet will take time, but a lift here, pirouettes and twirls are making themselves seen in the upcoming numbers. “ Bollywood is very closed , very  traditional, but some day I hope there is a ballet number. That is my idea”

Though he got offers to be on realty shows, he let them pass as he saw that the institute would have to be put in the back burner due to the full time involvement. His heart lay with his students. He personally instructed his instructors on how to instruct and teach the young students. “ I teach them , train them how to teach these girls, how to go to the next level, because I want them to be like me”

Mr Fernando believes in letting the students know the intricacies about each movement and posture ,- why they are doing so, the meaning behind each of the movement, how it should be done for the perfect grace-rather than just teaching them mechanically .

Contrary to what most believe, this is an art form that provides immense opportunities as a career –whether as a dancer, teacher or a choreographer. “If one goes outside to learn the ballet it would have taken him or her 6 years, so I bring the ballet here” Many from abroad had tried after him to come here and settle to teach but they usually went back after a few months.

He also joked that since most of the time here in India people are celebrating something or the other however minor it may be, it gave him a lot of opportunity for creativity as there was always one or the other event to choreograph”

He teaches them to be a dancer in spirit as well as follow a strict daily regime of health and practice . “To be a professional dancer one has to be a dancer in the mind, because saying I am a dancer is not easy. It’s all about training, more training, discipline and commitment to the art. You have to practice every day and not pursue it as a hobby with two classes every week” This was difficult initially to incorporate into the students because of the existing ideas, but with time it became easier to make them understand about the diet and the appearance part. ( yes, one has to be particular about them too)

“ But the students here are very respectful and obedient. This is the best thing about them. I have been here since last fifteen years and I know I have to be here for many years..I can’t just leave and go after all the commitment I have made.. I can see my dancers growing with my classes and this is satisfaction.”

I came back pleased feeling closer to my dream, of a day when ballet will be a house hold term. It may have Italian origins , but it is beautiful to say the least and I respect the art equally as I respect our own pride – the Indian classical dance forms, for dance is universal!

In conversation with Dr. Sonal Mansingh – Woman of Substance