Multi talented musician Akashdeep Gogoi and his band Dhairya was the second runnersup in the MTV Rock on contest cum reality talent show, but Akashdeep Gogoi and his band could have been the winner if the NE media coverage of the band would have been active- That is what a section of the audience felt when they ran short of votes in the finale of the contest. But a true talent can never be pulled down or overshadowed and Akashdeep Gogoi shone through to perform in many other important platforms. We bring before you a brief conversation that we had with the upcoming musician where he has speaks about his dreams, trials and tribulations and his latest release, a ballad Xurr 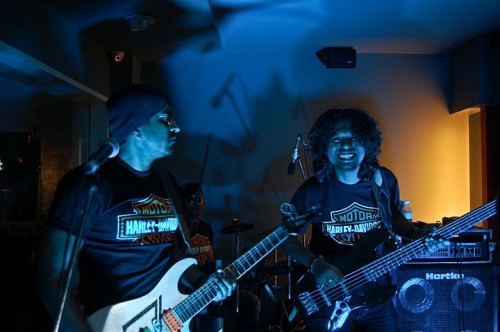 @What is idea behind ‘Xuur”?

‘Xurr’ means melody ….My first aquaintence with xurr happened when I was a kid of about 3 or 4 years. I clearly remember sitting on my mother’s lap during the evening hours watching the setting sun and the red sky,back then we used to stay in the hills of Krishna Nagar near Holy child school Guwahati.Therefore everything was visible to me from that hill.Sittting on the front verandah on my mom’s lap she would sing songs to me like AMARE MOINA …..BARIRE BOGORI BUTOLI KHABO,
MAA AAMI SADIYA LE JAAM E,DEUTA BEGOTE AAHIBI,EI MATITITE MOROMOTE..and various others. This is how I came to know about songs,melody and music.Thats why I have written ……

I had never ever  thought that I could write songs in Assamese not even in my dreams. I always asked help from my friends who were more into writing but somehow I never felt ok with their kind of writing not ignoring the fact that some of them were too good but they were just not right for my kind of music. I love simplicity…and therefore my lyrics are simple, as a matter of fact it is simple because I don’t know enough of the poetic  language in Assamese,Though my Late father was a poet and a writer I did not inherit any of his writing talents.

Through this song I have tried to relate my entire journry as a musician…my memories ,my present, my past ,my love and my passion all lies in ‘XURR’
@You have been part of a reality show. Has that helped you as a catalyst in your career so far?

To some extent ,I would say yes….because I made a lot of friends and I am working toghether with atleast some of them,But I expected a lot more.

People have a laid back attitude towards musicians(instrumentalists) in comparison to singers. During the final stages of the contest I approached a lot of media people in Assam to give me some kind of publicity or coverage but I could get none.

It was really embarassing for me when I remembered about Zee Sa re ga ma pa winner 2005 and Sutasi runner up(during that same year) They were everywhere and ME was not there even in a corner of a brief news column.Pathetic….

@At a time when music industry is going through a rough patch, how do ensure commercial viability of an album?
I m not thinking of making money by releasing an album,I just want my music to reach the right kind of people who are interested in something new.Internet has been very helpful…….

@Like movies, the music distribution industry has undergone a sea change. People are releasing albums without the backing of the well known labels. Your comments on this.

These well known Music Labels will not release your album unless you put down your own money into it and therefore only the rich non talented artists can enjoy this facility..

@Do you foresee a change in the way non-film music is beheld in India?

Bollywood rules in India…..but the style of music has kept changing and will keep on changing..

The Janata crowd will enjoy Munni,Sheela,Chammak Challo and Jalebi Bai which is going to continue anyways,non film music has a very slim chance of survival in such a situation.

@Apart from this album, what has kept you busy since “Rock On”?
Oh ! Nothing much, I joined a band called Zedde and played a lot in the pub and club circuit till last year. 2011 has been the turning point of my life,I was called to play for Sa Re Ga Ma Pa Lil Champs in one of the three bands. Thank God ! And I thank the Creative team for introducing the new three band concept last year. It was here that lot of people from the other two bands spotted me and called me to play with artists like Salim Suleiman and Sunidhi Chauhan….Now I am happy  most of the time…