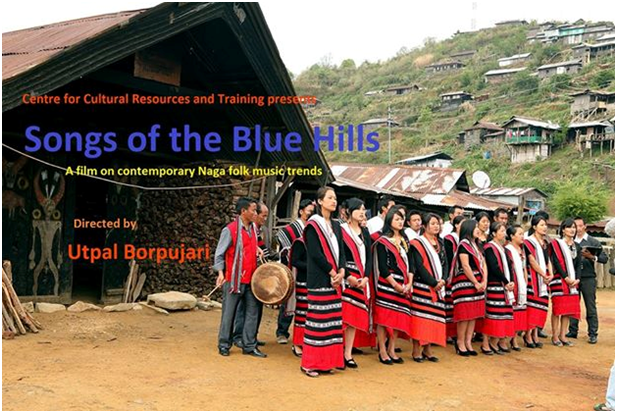 Utpal Borpujari, a geologist from IIT-Roorkee chose to be a journalist by profession who went on to become a well know critic and film maker. As I sat down to take his interview he shared the happy news of his documentary “Songs of the Blue Hills” being chosen for 5 International film festivals. That was a huge accomplishment for his career as a film maker.  Winner of the Swarna Kamal (Golden Lotus) Award for the Best Film Critic at the 50th National Film Awards of India, 2003, his Mayong Myth/Reality documentary was the breaking point of his career as film maker.

Fried Eye shares some wonderful moments about his experiences, opinion on varied subjects of his films and his plans on forthcoming endeavors.

FE: Utpal da, share something on the recent documentary which you have made; why the documentary? Where all is it going to be screened?

UB: Songs of the Blue Hills is my recent documentary, it is on Naga music. It is not the usual music but also it is not focused on folk music. Nowadays lots of interesting experiments are going on by mixing all kinds of music practiced in Nagaland. It is all about mixing folk music with different kinds of sounds by fusing western classical, choral, jazz, blues with the folk music. Due to the mixing of music, the inter-tribe mixing is also happening. We know that there are different dialects, where one tribe does not understand the dialect of the other tribe. Taking folk words from one tribe and folk tunes from other tribes….

FE: …. but won’t there be any overlapping or mixing of original lyrics and composition?

UB: No, they (different tribes from Nagaland) say it really promotes understanding and it is the need of time.

FE: This is indeed very inspiring to hear.

UB: Yes, there was a time, when one Naga tribe used to fight against another. The new generation today, everyone whom I met said, their societies have seen so much of violence, so music is such thing which can heal and develop understanding and friendship. They say it is important to do such thing. That is the feeling I got.

The documentary is produced by Centre for Cultural Resources and Training (CCRT) under Ministry of Culture, Government of India. They usually document lot of things. The Department trains government school teachers from different states so that the teachers can pass on the knowledge to students. The department has taken such step for the first time not only to document but capture the whole thing like a film. This is not only a document but it is like a film

FE: Is the documentary, Songs of the Blue Hills only about songs sung by different musicians from Nagaland?

UB: No, it is 96 minutes feature-length musical documentary with lots of songs and has lots of interviews with musicians, musicologists from Nagaland. The idea is to take the viewer in a journey through contemporary forms of Naga folk music – through 20 songs that feature fully or partly in this film!

FE: Why have you chosen to be a film maker from being a critic?

UB: I am a critic even now. For many years I wrote about films, I wrote about films for 20 years, I still write about films and I felt it is time to do my own thing, instead of writing about others. So I thought whatever I am doing in print media, I can take it to another level, instead of going to electronic media. I want to explore the cinema media although you don’t explore cinematically which is a visual media only but I thought I can explore things in cinema in a much more detailed and artistic manner. So, I thought of going for film making and I do have interest in documentary and feature film. I am working for a feature film; working on some idea; hopefully it should work.

FE: As a documentary and film maker, which was your first breaking feature?

FE: You are bringing the unknown part of the world to the rest of the world. How would you like to explain your ideas and subjects of choice for documentaries or film making?

There is no fixed subject for me, I would go for ethnic cultures and ethnic tribes, there are socio-political subjects also which I would like to work in future. In political sensitive regions, there has been lots of violation of rights of common people whether by state or the non-state actors. I co-authored a book on Secret Killings of Assam which basically is documentation and it is a very interesting subject. Other than Assam such killings took place in Punjab. There are lots of stories like these waiting to be told.

Another area to look into is urban space which are so beautiful and natural and they are getting destroyed, take Guwahati city for example that can be another subject too.

FE: You have lots of ideas in place in future to showcase in future, how viewers perceive these subject-lines in your documentaries?

UB: People have started to know more about North-East India, there is more awareness relatively than what it used to be 19 years ago when I started journalism. But still people don’t know much. I would like to call them illiterate; illiterate as far as North- East India is concerned. They have no idea; even among journalists they have no idea as to where Aizwal is. In media, even people did not know about Mayong. At present also many people don’t know about it. The Songs of the Blue Hills, I think  will open a whole world of music to people because in Nagaland, so much rich work is going on  and bringing such a good work to public about mixing of songs is good idea.

Films as a medium, is an effort to bridge the gap in bringing North-East Indian cultures and knowledge more closely to other parts of the world. It is not like that I will involve only myself, but it has to be done together by many. It is a long process. I have developed few of scripts, based on literary works. It can be in Hindi or Assamese or English. There are many rich literature works in Assamese and are also written in English. But it will depend on where I get funds from. 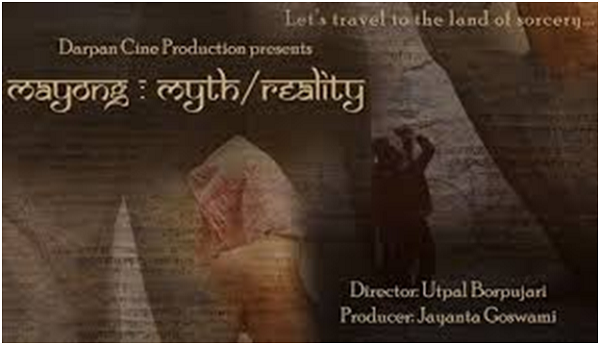 FE: Do you think the documentary Mayong Myth/Reality was able to send some feelers to the viewers about North-East India?

UB: It is an interesting aspect and it’s a legend with so many stories. Mayong will act as a source of information for people who would like to research and for tourists who would like to visit the land. Whether you believe or do not believe on its myth; it is a different take but there are lots of manuscripts which are magic manuscripts. There are many manuscripts in many houses and there is a museum where these manuscripts are preserved today scientifically. It is a documentary of 53 minutes and in the last 6/7 months after being uploaded in youtube there are more than 9000 viewers. Everyday 50 to 60 people are watching the documentary which is good number for a documentary film. Definitely it shows some people have interest.

And all the more, switching from an established career and taking risk, there would be no meaning until I bring some unconventional stories. Take Mayong, even our people from Assam did not know it, we don’t know about each other in North-East India forget the other parts of India. Leaving journalism aside, how many of the common men have left their state to go to other state. People go to Bangkok, but they don’t go to Nagaland and Mizoram. We ourselves have to know and learn many things from each other.

FE: After Mayong which are the other documentaries that you have done?

UB: I did one documentary for Panchayati Raj Ministry and it would be telecasted by Doordarshan’s Lok sabha TV, or telecasted, I don’t have any idea, as they don’t give any news on such. It is called For a Durbar of the People. It is about local self-governance system called durbar, which shows whether it is relevant or how relevant it is, if any changes are required. It is a television documentary.

I have made another for Rajya Sabha Television also, which I have already finished and will be shown in near future. It is Soccer Queens of Rani where poor girls from Rani are taught to play soccer by a coach who has dedicated his life to the game and its welfare and trains the young girls to be soccer players. The Soccer Queens of Rani is a humanitarian story. Why a person would go to a backward village and teach football to poor girls on his own expense. It is a positive story from North-East India. Why are they learning football, they have aspirations and take for example the Songs of Blue Hills, nobody knows that such beautiful work on music is going on. I discovered a lot of things while shooting that film.

FE: What was that striking experience while making the film Songs of the Blue Hills?

UB: I discovered so many things, there are enormous treasures of musicians, talented young people, old folk singers who have silently documented their music when church had banned the folk songs. Now the young generation reversely is infusing the folk tune in the church chorus. The churches if they make a new folklore in choir, it is new. Folk music is created by communities. It is everybody’s property. It always evolves with new elements.

FE: What about plagiarism in folk songs?

UB: If Bhupen Hazarika, or Zubin sings based on folk tune that is not plagiarism. It is like using folk elements in different style. Folk music has no creator, there cannot be plagiarism. Now if you take Ravindra Sangeet, it is out of copyright since 10 years, now people sing rock song out of Ravindra Sangeet. It is now open to the people. They experiment with it.

FE: What are your upcoming projects?

UB: I amconcentrating on a documentary on Second World War as it occurred in North-East India. It is produced by Subimal Bhattacharya. We have so far worked only the preliminaries.  It is going to be a big project.

FE: Do you in the long run would like to be a feature film maker?

UB: Yes of course! I guess I am already a film maker. I have plans for fiction films and I am also developing scripts for them where some parts will be in Hindi and some in Assamese.

FE: What would you want to say to your readers?

UB: Come and explore North-East. If you don’t know North-East you are missing out something. If you come and visit, lots of misconception will go. Everybody who has gone to North-East has good story to tell. But unfortunately only bad stories are highlighted in media. We have failed to project ourselves including the political leaders. People outside do not know the history and about our society. We have failed to communicate to outside world. First we have to communicate. Has the political leaders ever tried to get the HRD Ministry to include the North-East history in school curricula? If there are no curricula in school on North-East India, what are our leaders doing?

FE: That was indeed a strong message to all. Thank you Utpal da,  for your time and Fried Eye team wishes you all the best journey in future projects

You can watch the promo of Songs of the Blue Hills at https://www.facebook.com/SongsOfTheBlueHills

A brief Profile of Utpal Borpujari

As a  member of the International Federation of Film Critics (FIPRESCI), he has served on several prestigious film juries:

Find more about him  on  http://utpalborpujari.wordpress.com/