TV Viewing is Harmful to Children 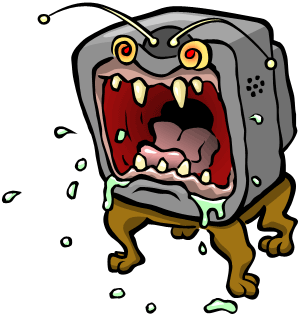 Hello I am Srajan ! I study in the ninth standard and just as it happens in every school, we too were given an assignment in the form of preparing a debate.
As it again happens I took the help of my chachi to prepare my speech or rather points and thanks to her I had the most boring speech among the lot and I will not go into details to bore you all but instead I will share with you what I wrote initially which was rejected instantly by my Pyaari Chachi.

TV Viewing is Harmful to Children

TV has a very important place in our home. All of us have preferences. Like I love watching Johnny Depp movies. That day I wanted to watch Johnny Depp but Papa wanted to watch Tennis. I tried to snatch the remote but papa was fast. He snatched the remote. Then he snatched my hair. And then locked me up in the bathroom for an hour so as to not to be disturbed. Oh did I mention that when I tried to snatch the remote I broke the costly vase. Well so there I was sitting in the commode and waiting for the match to finish and papa to cool off! Finally after an hour I was let out.

As papa had come back to his cheery mood, I decided to watch Johnny Depp again, but My sister wanted to watch Shinchang . Again a huge noisy fight started. My sister though younger was stronger and faster and she beat the hell out of me. In no time I was decorated with one black eye and 8 scratches. There was scope for more but momma rushed in .mothers are so blind….no no not with love but with their sense of justice. She thought I was the culprit and I was again marched off to the bathroom with full honours. She reminded me as always that I will become a peanut seller when I grow up. I don’t know what that had to do with Johny Depp. Again me and the commode for another hour. . At this rate I was going to become its best friend next only to the hands free machine.

One hour later I tried to enter the TV room but I backed off after seeing momma crying away with Iccha of Uttaran. I waited for Iccha to give another speech to her spoiled friend about life, patiently. Finally momma left the room all red eyed but only after Iichcha had left. I rushed in finally to meet Johnny depp. But alas! he had died of excessive drug dose in the movie. So I decided to drown my sorrows with a coke and sleep ….but suddenly at 2 am, my youngest sister of two years woke up and waking me up said. “Bheeeya! Stunart Little(she meant Stuart Little in the DVD player) laga do!”.In the morning I looked like a Panda. Dark circles in a pale white face. Totally tired and disgusted…..with TV convinced that TV viewing is harmful to children.