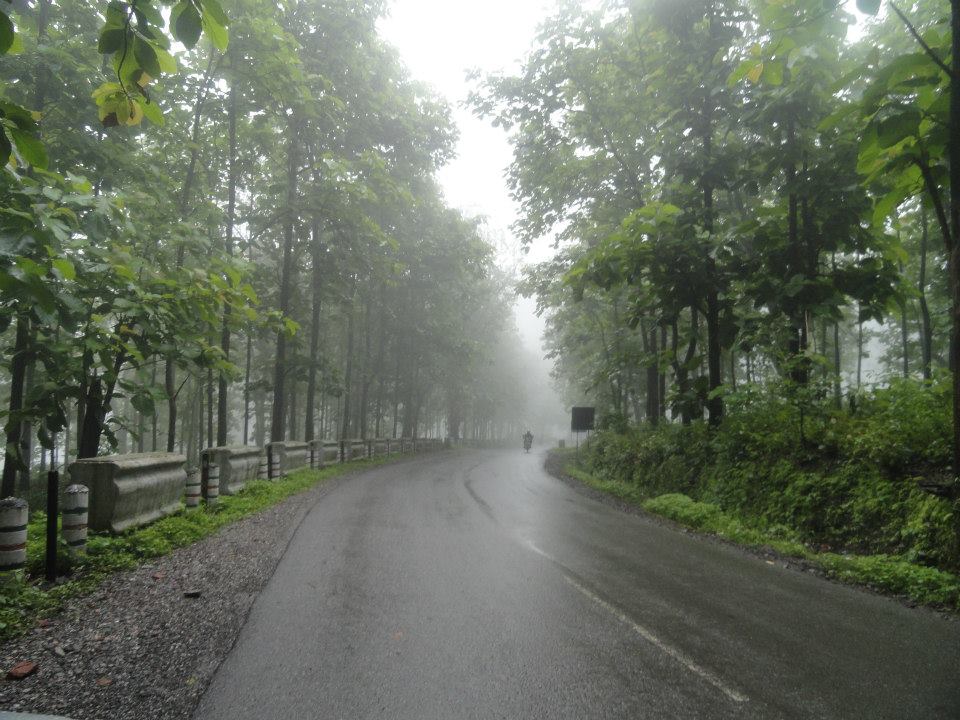 Mehrangarh Fort shot into fame or rather notoriety when there was a buzz that it might be,a remote chance that, it might be haunted. It is true that there is a signboard that advises tourists to keep away after sunset.

I have been to many places in Uttaranchal and Himachal and though I never had an overt occult experience, even in the famed hills of Ruskin Bond’s Kumaon and Garhwal, the set up for many of his haunting stories, I had moments where I had the creeps in real sense and I came to understand the meaning of the phrases hair rising in a prickle and goose bumps during some of my sojourns. There surely must have been some scientific or logical explanation for the same, but at those nerve wracking moments, no logic did seem to work except for the word haunting and hunting. 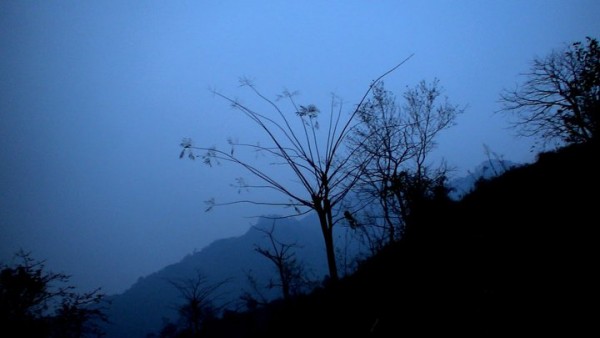 Well here, let me just ask you a few questions to get you into the thick of things. Have you ever driven around in the mountains? You have? Good! In the dark? After dark? How high were the mountains? Was it populated or lonely? Yes these factors do matter in increasing the chill quotient of the experience.

The high lofty mountains of the interior Himachal used to throw long and scary shadows at sunset, which by dark used to become dark, desolate and creepy. Many a time while driving in the dark on a starless night in the mountains, I had some spine chilling moments more out of my imagination than by concrete evidence. 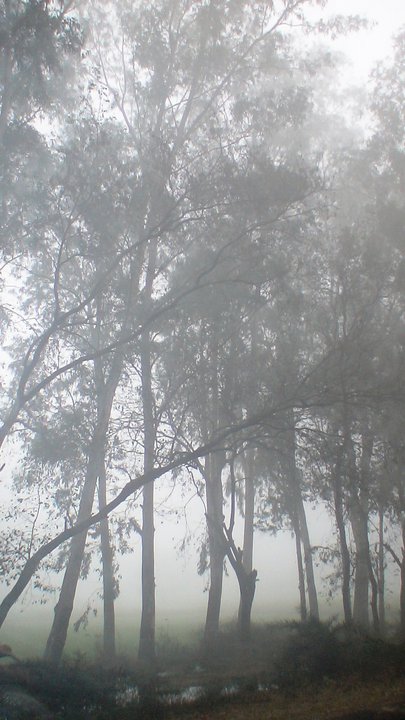 The first scary moments that I faced during my tour were at Pinjore Gardens, a beautiful place at the foothills in Haryana just before Kalka and Shimla hills. We were on our way to Shimla actually. But it was a wintry night, predictably yes, and by six pm , we were so much engulfed with fog, that we had to break the journey and halt at the nearest possible place, which was the tourism complex in Pinjore.

The rooms were interestingly named as Maharani suite, Maharaja suite and there was a Wazir one too though I do not remember exactly. We booked the Maharani suite which had a king size circular bed and a smaller triangular divan sort of arrangement behind a wooden separator or curtain. But it was a huge room, carpeted, dim yellow lights, with paintings galore of most previously, previous owners. All regal and ancient looking noblemen who seemed to look disapprovingly at us.

I had my first unpleasant experience in the huge tri-compartmented bathroom the first night itself when I slipped and fell after suspending in the air for some nano secs. When we went out to the terrace at around ten pm, there was a thick fog which screamed mystery and murder. The mist floated in and out eerily. Lights- of course they were there, but made the ambience seem more ghoulish with the lights casting eerie shadows of the trees on the walls.  It did not take more than a minute for me to scamper inside to the comparative safety of the room. The moment, the lights were off I started having the goose bumps in that ancient dark room, which housed God knows how many secrets. Yes the suite did seem to be a room of secrets. Situated, apart from the rest of the block in the farthest corner of the mansion across a terrace, my imaginative mind did wave many a sinister story involving the Room of secrets. Come morning, the atmosphere cleared a bit, but the pervading gloom persisted. Never had I been so scared out of my wits in any hotel room ever, not even in the ancient creaky havelis of Rajasthan 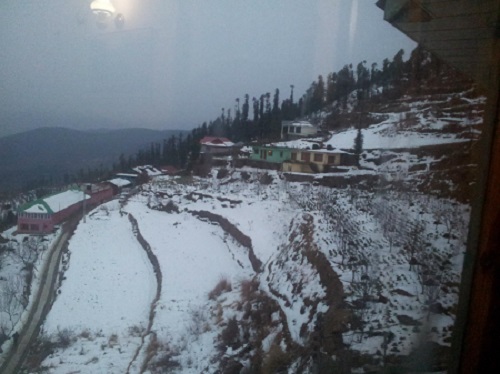 My second scary moment was while we were on our way to Naldehra. We reached Shimla late at night, around nine-ish which is late by the hill standards. Instead of putting up in the messy crummy hotels of Shimla, we decided to ply on towards Naldehra, deciding to halt at any hotel that seemed suitable. It was around 10 pm when we approached the first one in Mashobra. The chowkidar didn’t even open the glass door and waved us away . The next was a Hotel Woodstock. The gate was open, the door to the lobby was open, but not a sign of life. We called aloud to anyone who could be there, but nobody answered which was weird. We were just debating on what to do next when I remembered the Woodstock Villa movie which is a murder mystery and that which suddenly tilted the scales in favour of beating a hasty retreat. But the adventure didn’t end there. After driving a few kilometers uphill, we halted to take a break, nature’s call for the kids, when suddenly my husband exclaimed about something he saw behind approx 50 metres away on the road. It was gleaming red in the dark as if it were burning charcoals, but we didn’t see any such thing when we had come by that way just minutes before. Gleaming, shining dark red which had no shape. It didn’t look alive yet it didn’t look inanimate either. He and the kid niece wanted to go up and check, but as I found no apparent explanation for the same, I did not let them go near it. On the way we had some serious discussion on what it might have been and the suspicions ranged from alien life form to Satan to unicorn blood. 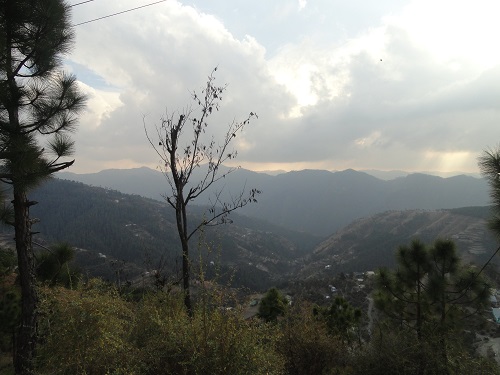 The next spot that gave me the jitters was an accidental revelation and if the conditions present at those moments  appear at any other place in future, I am sure would scare anybody away for sure. As usual we had a long drive ahead of us from Dalhousie to New Delhi  and we had just crossed Kangra valley driving on wards to Una. The kid niece was with us and out of sheer boredom asked me to narrate some spine chilling ghost stories. Cocooned well in my lap, she scoffed at each one  of my tales as being damp and dull. She gleefully kept on mocking me at being unable to scare her, when suddenly the husband stopped the car , switched off the headlights and asked her if she could step out of the car alone for a minute as a part of dare.

Only when he switched off the headlights, were we able to fathom the pitch black darkness around us. There was not a star in the sky, nor a vehicle at sight for miles. Needless to say we seemed lost and appeared to be the only living being in the whole of Universe. The mountains loomed scarily around us .The little girl was frightened, but so was I. It felt weirdly scary standing there in the highway,, alone, unseen, unspoken altogether with not even a ray of light or twinkle of a distant lamp. Clearly a terrible place to be stranded…and clearly terrible way to be stranded too.

And now finally Chail- The experience in Chail wasn’t a creeped out experience as such , rather my imagination went hyperactive and the incident borders more on the humorous rather than horrendous.

After a long drive through the night from Jaisalmer, crossing Bikaner, passing through Punjab and finally entering Himachal, we landed in Chail at around 5 pm. We booked ourselves at the Chail Palace but instead of settling for a room in the main hotel building we opted for cottages. The Chail palace ground is a sprawling one and spreads across beyond what your eye can see. In fact one whole hill is being landscaped to be the hotel grounds. So we settled down in our cosy little cottage. As I had enjoyed a good nap in the car , I wasn’t sleepy, nor was my one year old daughter. Husband though slumped in the carpet itself after the longish drive. The main block offered many facilities from games to a book library , a DVD library and lounges and such. I decided to walk to the main hotel which I am sure would be around a half kilometer or more even. The path to the main hotel was through the woods, the hotel ground woods, which overlooked the valley down and was, yes you get it- lonely and quiet. While coming down to the cottage it seemed awesome – the view of the yonder mountains, the valley below, the tall trees lining the path … 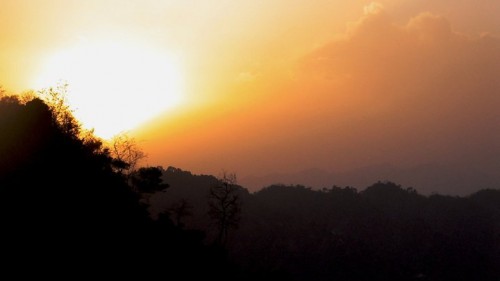 But the hues changed with sunset. I decided to walk up to the lobby with the kid on my arms. I thought the walk and a read would do fine. So off I went jauntily with a song on my lips. The point till where the verandah lights lighted the path was fine but then suddenly the lights began to fade with distance, till it was dark. I had a torch light but still it was dim. The kid gurgled and cooed happily. The atmosphere was tense for me though. The absence of light and life made me slightly wary. It looked ghostly! But I shook my fears off. Weren’t children supposed to be another avatar of God, so why worry? The kid was with me and so I was safe from evil spirits. The thought carried me on a few more steps, and it was then I felt or rather imagined something following us on the sides. I peered but saw nothing. No ghosts..but wait what about prowlers? Animals? The woods were thick. The trees would easily hide an animal or even…a man. Or even a psycho killer? Suddenly the baby didn’t seem like Atlas. I tried to shrug off my fears but going forward seemed to be a herculean task. Naah! No psychotic killers for me. No retreat, No surrender , except that I applied the policy in reverse. Within minutes I reached the safety of the couch and watched Tom and Jerry with the little darling. Whoever said TV watching is dangerous hadn’t been in my predicament surely.

So there they were- some of my memorable ‘freaked out moments or travel tales’ . Could be much ado about nothing, but life is a sum of all moments of your lifetime, and those do figure in some of my scariest ones till date.

Of course I had been to Harsil in Uttaranchal, where there is a folk legend of a phantom horse rider, but didn’t experience no such thing nor fear of any sort.