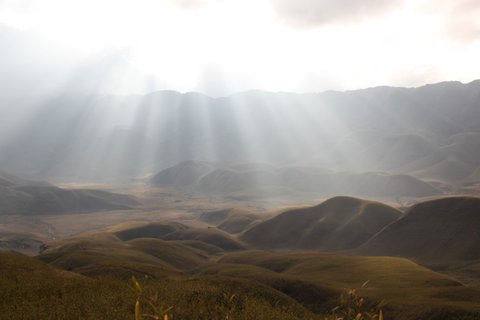 The term “took my breath away” takes a whole new meaning when you trek to the Dzkhou Valley in Nagaland.

I found out the hard way that 18 years can seem like a lifetime! 18 years ago, the limbs were stronger, the blood younger and hotter and the heart ever willing. The heart and the spirit are still willing but I realised that the other two parts had become slightly jaded as I forced myself to climb the steep incline on the way to Dzkhou Valley. 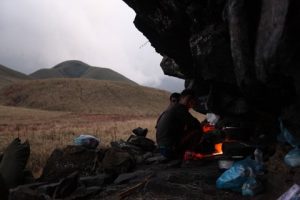 And like all those years back, I was cursing my decision to do  15 km (approx. one way) trek until I reached the top and looked down to the wide valley. As I looked down, I realised that the words of my guide held water when he said “you will forget your tiredness as the valley unfolds before you!” 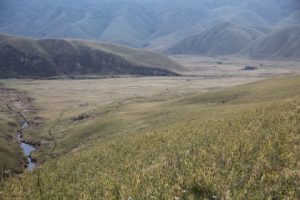 The Dzkhou valley in Kohima district of Nagaland is one of the best trekking routes in the entire North East India.  There are different routes to get to the valley and we choose one of the easier route which starts from Zakhama, 16kms from Kohima. It is also called the Southern Range.

As we left the highway and took a diversion to get to the starting point, the road climbed up sharply and at the same time crumbled so badly that the vehicles had to be pushed. The road is a relatively new one and it has made the life of trekkers much easier. 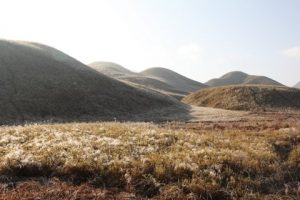 At the end of the road, we had to pay a token fee of Rs 20 each and were issued a receipt.  The Nagaland Tourism Department have done well to construct some sort of a pathway that has helped make the approach to the top much easier. Even with the stone steps, I found the going rather hard indeed and then realised that it must have been absolutely back breaking to climb this route before the stone steps came up… 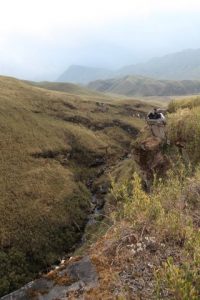 After about four kilometres of climbing through the stone slabs and huge rocks chiseled for footholds, we reached the top. The vegetation changed abruptly at the top. Up till now, we were climbing through some thickly wooded areas where long stout veins dropped down from the trees and the leaves were of a deeper shade of green. In contrast, the top was barren and extremely windy with a sheer drop and breathtaking beauty of the valley way below and the blue mountains yonder. 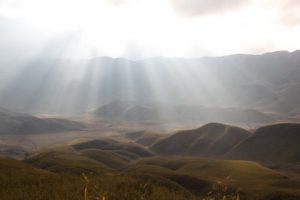 A 5 minute break stretched to 15 minutes and as soon as we started again and crossed a coppice gate, we were transported to a different world altogether. The mountains gently rolled into each other in a never ending chain. We didn’t have to climb up the rocks anymore but walked gently along a narrow path shaved out from the middle of the hills. The path ran across the range.

The hills seemed to be covered in a billiard table green. Smooth and even. The green is in fact a hard shrub from the rattan family I guess and from afar, it seemed that they grew to certain height. 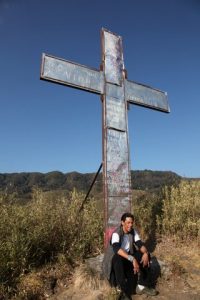 Another trek of 5 kilometers brought us to a trekkers camp.  The camp is actually a big hall with a kitchen at the back. But although the hall would protect us from the cold and the wind, it didn’t appeal to any of us.

Words seem rather inadequate to describe the view of the valley way below from the rest house. The rolling hills gradually lost their elevation and slowly gave away to the great plains. From the rest house on top, it looked like God had draped the valley in a sheet of velvety green as far as the eye could see.  The sun broke through the clouds in patches and rays of brilliant sunshine in between the dark clouds shone on the valley.

The three young boys from Viswema village – Micikvikho, Nosavi and Khviskh who were our guides and everything else for the trek pointed out to a rock formation about 4 kilometres away on the valley. From far it looked just like a pile of rocks in the middle of a great plane but it did look interesting. 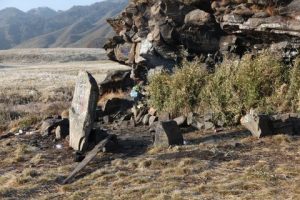 We walked down the hills, past the helipad (I wonder how many times the helicopter landed here) and then we hit the plains.  Narrow streams of icy water crisscross the plains and the villagers have built some lovely wooden bridges across the streams.

Since there are no huge trees to scribble their name on, trekkers have come up with a better idea. They just paint their names with bright colours on flat stones and put them on the stream bed.  The water is crystal clear and one can see and read the names clearly from the bridge. 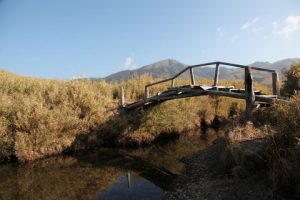 The pile of rocks turned out to better than that. It was a rock formation called the Khuzama Camp with an overhang and this was where we decided to halt for the night. There are two other camps a little way off and they have been named as Zakhama and Kewhema camps.

The boys from Viswema were excellent and they got about the business of making dinner (or was it lunch?). We reached the camp early evening but by the mountain standards, it was already rather late and time for dinner.

We cut the tall and tough reeds and covered the open area to keep the wind out. As soon as the sun disappeared behind the mountains, the wind came howling and the cold set in forcing all of us as close to the fire as possible. 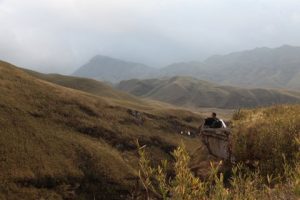 The reeds did help in keeping the wind out but you should invest in a very good sleeping bag if you decide to spend the night outdoor. I woke in the middle of the night and looked up to see a brilliant moon and a million stars shine on us from a cloudless sky. I had them all to myself for a few minutes before the biting cold drove me inside the sleeping bag. 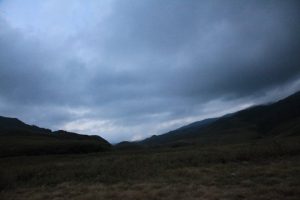 In all these years of travelling and camping, I have not come across a more spectacular early morning sight. The sun had still not shone from on us and the valley was shrouded in mist and frost.  The vegetation was covered in frost and it was white as far as we could see. Portions of the streams had frozen over and so did a bucket of water!

As the day progressed, the hills changed their colour – shades of green and golden yellow and the cloud play made it all the more amazing. In a few places, I found the vegetations trampled and the ground had marks as if a herd of elephants had walked by. The guides did tell me about the elephants but I wonder…. 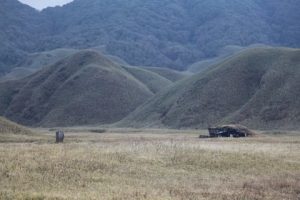 The Dzkhou Valley sure can get a hold on you…no matter which time of the year you travel. In the winters (we went in December), the frost on the plants, icy streams, shades of green and yellow on the mountains and the brilliant blue clear sky in the day bejeweled by a million stars in the night will enthrall you. And if you travel in the flowering season on May and June, the different shades of rhododendrons flowers that cover the valley will make your heart smile.
They say that if you travel to Dzkhou Valley with the one you love, you end up staying together for evermore!!!

Sure is a nice saying….wonder if it ever came true!! 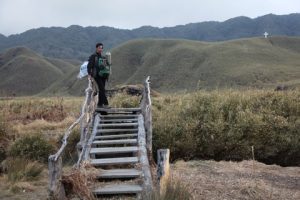 A travel in time- In conversation with Shri Ram Ayyangar