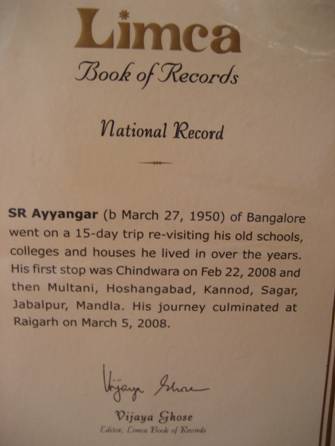 A travel in time- In conversation with Shri Ram Ayyangar

We often dream of small things, or bigger things. A wish- a secret wish, or a dream, or may be just a simple wishful thinking that if…? Only if?

If only I could meet my hero?

If only I could win?

If only I could be on TV?

If only I could go on that trip?

Very often we sigh and forget them. At times we make some halfhearted attempts to make a show that we tried, but only the steadfast and the brave go for their goals.

” Ever since I took voluntary retirement from Allahabad Bank in 2001 after serving for 28 years, it was my long cherished dream on the back of my mind to revisit those places wherever I had my education starting from Ist standard to the last and to visit all those schools/colleges where I have studied, to show my gratitude for what I am today, talk to the present teaching fraternity, visit the house where we spent our old days, meet old friends and teachers if possible.”

This is an excerpt of Mr Shri Ram Ayyangar’s blog post about a momentous journey that he had undertaken as can be deduced from the above , and that which earned him a place in the prestigious Limca Book of Records, national record.

Mr. S.R.AYYANGAR is a 62 years old retired Bank Manager who was born and brought up in Hindi belt of Madhya Pradesh. 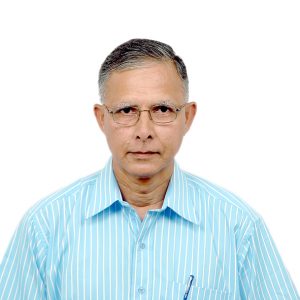 He has a deep Interest in writing, blogging, travelling and good music (Language no barrier) and developed a hobby of writing children stories in Hindi  from the age of 14  which in turn became a passion.
He started writing Hindi satires around 1972 and published in all leading Hindi Newspapers and magazines like Sarika, Sarita,Youth Times,Nav Bharat,Saptahik Hindustan,Parag,Nandan etc  etc as well as broadcast on All India Radio. His Hindi Collection of Satires “Ek Bimar -sou anar” was published in 1984. and he also started writing English satire after retirement in 2001 from service.
He had also edited a Hindi satire magazine ‘Vyangyam’ from Jabalpur for 3 years and edited an E-zine on awareness issues ‘Master’ for a NGO for 6 years . He did counseling as volunteer for a NGO ‘Sahai’ (for Suicide Prevention) for 7 years.
We had the honour of having him with us for a brief conversation where he shares his experiences of his memorable trip with us

FE-A trip down the memory lane is something which everyone dreams but very few implement it. You had not only successfully completed your journey , but also carved a niche for yourself in the Limca Book of records for the same. How and when did you exactly decide for such a journey in certainty?

Mr Ayyangar-Even during my service days I wanted to undertake this journey but started seriously thinking about it when I took voluntary retirement from service in 2001.It took another 7 years  of dreaming to transform those dreams in to reality. It was only in Feb’2008 that I decided ,enough is enough, let me start and announced to my family that I am starting!

FE-How did you feel before embarking on your trip? Was it apprehension? Excitement or Some kind of calm and peace? Were you afraid of the change that might have taken place to the picture you had treasured since long?

Mr Ayyangar-I was not apprehensive when I embarked upon the journey. Every place, every road was clear in my mind like a camera photo. It is said that one remembers many things about childhood and in my case I had a good memory of things right from the age of 6-7 years.Most of the places where we lived in M.P. were either village(Tehsil) or small district towns. Being not so developed state, I did not expect much change but I was excited to see changes there.

FE-And how was the feeling after the visits were done? How was it reconnecting with your teachers and class mates?

Mr. Ayyangar-It was dream come true feeling of satisfaction and fulfillment. Meeting old friends & teachers gave me immense pleasure and surprise to them. A sanskrit teacher who was a terror (those were the days, corporal punishment contnued even in 11th Std!) to me  in my 11th Std class (Hindi-’Unse Kafi Bent khayen hain’) gave me full day company when I visited his house and saw me off at the bus stand.

FE-What was the highest point of the trip?

Mr. Ayyangar-I had a surprise of my life time when the School principal himself brought a register from the store room and showed me my marks obtained in class II & III during 1957-59!  Another point was, going inside those houses where I lived/played/slept & studied.

FE-Adventure of such magnitude isn’t usually observed post retirement. How were people’s response once you had informed of your decision to revisit your past?

Mr. AyyangarMy family members too were excited about the trip and lent me full support. Infact, my brother and sisters too wanted to come along as they too wished to re-live those days.

FE-You had planned meticulously to cover nine places in 15 days. Though it sounds so dreamy and nostalgic, in reality how daring and difficult was it to undertake the journey alone practically?

Mr. Ayyangar-I was aware of the shortcomings and poor infrastructure. I knew that places are not well connected by rail and have to depend on state run transport. I was also aware that in those places, night stay & food arrangements would not be of one’s choice. But, I was fully prepared to enjoy those shortcomings.After all,it was a life time journey.

FE-Revisiting after so many years, you must have seen changes in those towns and places? Did it hurt to see them?

Mr. Ayyangar-At some places, I was expecting bad roads, poor condition of buses but it was not to be and could see little difference. In most of the places visited, I did not find marked changes except few big buildings here & there, nothing remarkable.Places like Kannod,Multai remained the same as in 50s or 60s except that cycle rickshaw were replaced by autos..Even bigger places like Sagar,Raigarh & Jabalpur had  not changed. Progress of the state in the last 4-5 decades was dismal and disappointing.

FE-Sir, you have a blog that goes by the name Vyangam which specialises in satire with relevance to day to day life and your observations and writings seems to project that you view your life as journey of sorts. And your blog as narration of the traveler as he passes on… Kindly comment.

Mr. Ayyangar-Satire is mirror of our society.Most of my satires are based on  observation  of incidences/experiences of day to day life around as a vigilant citizen. I write only when I feel strongly about the subject. I don’t write,for the sake of writing.

FE-Now a very technical question,how was your experience put forward for the perusal of the Limca Book of Records?

Mr. Ayyangar-Frankly speaking,when I embarked upon this journey, I had no intention of breaking or creating a record.It was during the journey, I met an Executive Engineer who told me that What I was doing is very unique, may be ,never undertaken by any body else.He only suggested to ascertain this from Limca book of record. On my return, I enquired from Limca book authorities.They in turn informed me that no such record is with them. They asked me to furnish all the details and photo proofs. That is how, I entered into the record book and you will be surprised to know that the photo which appeared in 2009 edition of Limca book along with my details was that of Executive Engineer and not mine!!!! Though Comedy of errors but he deserved the honor for suggesting me.

FE-You had visited your schools and colleges in your memorable trip . Can we expect another trip with a different agenda  from you in the near future?

Mr. Ayyangar-Yes, another wish is there in my bucket list. Now I wish to visit all those Bank branches in M.P. & TAMILNADU, where I have worked from 1972 to 2001.

FE-Life begins at forty. Would you like to say something to our readers on this?

Mr. Ayyangar-I really don’t know how it feels to be 40 or 62, my present age.But yes, life really begins after retirement when you can freely do all those things which you always wanted to do but could not do because of family or official commitments.