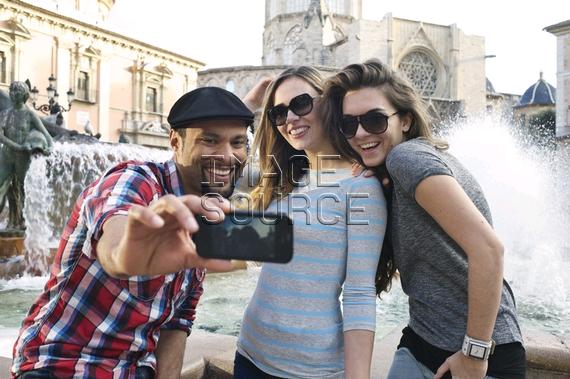 Of the photo-bug and how it killed curiosity

Last weekend my husband and I decided to explore Delhi a little. Surprisingly the first place we stopped was the Indian Science centre. The ticket counter area was filled with kids waiting to enter the place and demanding parents to buy the tickets for the 3D show and the star gazing show. I was quite surprised to see so many enthusiasts so early in the day and a little happy too that there are some sensible folks around. We got the tickets and entered the place that was already buzzing with stern parental calls and kids running here and there.

There was the stringless piano, fresh water aquarium and the marine aquarium and a whole section on water conservation plus a few more magical trick sort of fun science in front of us. All good so far till I started noticing what the kids or their parents were busy doing. Every set of visitor was busy clicking photos of every possible specimen and any corner worth posing.

Mostly it was not the kid who was interested in the pics; they just wanted to move from one section to other and gaze at whatever caught the fancy. But it was the adults who wanted to capture their kid in phone cameras and politely ask to be clicked with them too.

This obsession with taking photos and sharing everywhere has been prevalent from quite some years and there has been lot written about it on social media. But for this is the first time I realized how it was taking away something very basic from the human nature – curiosity. There was not even one kid whom I heard asking or wanting to know what made a specimen ‘special’? Not even one read the board of stringless piano beyond the name – no one discussed how did it work and the principle behind it.

First floor had the heritage section which had the replicas of various architecture styles seen all over the country, the painting and the musical styles and some of the oldest scientist inventions with basic details of each. While we were busy discussing and trying out the semi automatic visual aids (whatever worked) present there, I was getting so distracted and irritated at the people asking me to move aside or calling to get their photographs clicked. Each photo was then passed to the others for approval too. By this time I was scared to take any pic for my reference or my IG account.

The top floor had the bio section with some detailed diagrams and models of human organs. Not surprisingly, the kids found them all new and bit interesting but there was no one to educate them further. While I can argue that the science center should have volunteers for giving a guided tour of the whole place, my question is what were the parents there doing? Is it enough that they brought the kids to an educational place? Who is going to make sure they are not just entertained there but educated too? Whose duty is it to teach them to ask questions about things around us? What kind of adults these kids are going to become? I can so easily believe now that the generations are getting dumb and dumber, but I now know the older generation is as much to blame. I recollect how my mom who would make us take notes of what we saw and then find out more about it herself to teach us later. Thanks to her, I was in habit to read every possible information board put up in the Science center and to discuss it too.

There was an exhibition outside the center where some of the latest inventions were being shown and explained. That was a place where no one was using the phone but few parents asked the kids to pay attention to what was being told at the stalls. Thank goodness, for some hope! May such folks keep inspiring the ones like me and a few photographer parents too. Else we might have more albums of similar images than kids with different minds.

Three reasons why AFSPA should be extended to all of India