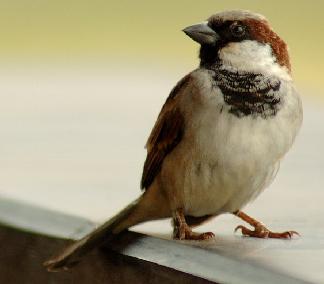 Fried Eye notes – Squeal for help is a well researched concern raised by the author about a grave issue. Sometimes in our race to success we forget about our environment and fellow inhabitants of the planet. But the clock is ticking off

Sparrows have always been an inseparable part of our city life. Most of us remember waking up in the morning by the chatters of the sparrows; hastily flying across the rooms with twigs or grains on their beaks. We all, in several instances have discovered sparrow nests made of twigs and scraps on the ventilator or behind the almirah. How does it feel to know that they are on their way to extinction? On asking, most of us will say that yes, sparrows are really getting scarce now a days, but to be specific, House Sparrow is in International Union for Conservation of Nature (IUCN) red list and according to it, there are only 540,000,000 house sparrows all over the world.

There are almost 5-6 species of Sparrows found in India. House sparrow is one amongst them. House sparrow, whose count is rapidly decreasing has evolved with the human being and mostly nests around human habitat. The jungle habitat is unfavourable for this small defenseless creature and so are the urban and rural habitats becoming. Due to various human activities like modifying architectural patterns, excessive use of pesticides, radiations emitted by cell phone towers and replacement of food sources by exotic species, the count of house sparrow is rapidly falling. “The highly intensified magnetic fields of the cell phone towers and the decrease in number of shanty tin roofed houses are the main reasons behind the decline in the number of sparrows” says Malay Barua, co founder of Early Birds, a wild life conservation society. “People also have become intolerant now days. They don’t like sparrows nesting around and dropping nesting materials and their wastes inside the house” said Dr. Ranadeep Sengupta, an ophthalmist and a bird lover.

Sparrow inspite of being small, plays very important role in sustaining our existence. Since Insects are the primary diet of the sparrows, they eat a very huge number of insects and thus control the pest infestation. Also since sparrows are found in abundance, they act as food for the birds of prey and hence maintain the food cycle. The Sparrows are important constituent of the ecosystem, and eliminating them will have serious effects on the bio-diversity. We humans are just a card in the deck of cards. No matter how significant we think ourselves, we will also fall as the other cards fall. There’s an living example of this. On 1957 due to the failure of harvest in China, Mao Zedong despite of strong objections of the experts, ordered mass killing of sparrows between March and November of 1958. The massacre culminated on 13th December 1958 killing 194,432 Sparrows. This finally resulted in to the failure of 1959 harvest due to pest infestation. Also the experts say that the massive massacre of sparrows have sent a wrong message to the youth of china and they got the misconception of killing of weeks due to the greater good of the society for which, the famine of 1960-1962 which tolled for the death of almost 40 million Chinese happened. Thus we can probably say that if this species gets extinct, we may also get extinct eventually.

But it’s never too late for taking a good step. In the 1990’s, the need for sparrow conservation was first felt when the Sparrows in Britain had decreased to upto 67%. Though in India we do not have any historic database of the counts of sparrows, the chronic decrease is undeniable, and hence, steps are being taken for their conservation. Though the change would be drastic, our winged companion can be saved by a little change in attitude and by taking few conservative steps.

The Nature Forever Society (NFS) in collaboration with The Eco-Sys Action Foundation and many other International and National organizations designated 20th March as World Sparrow Day. To honor the day, on 20 March 2010, Indian Postal Department released post cards of House Sparrow along with Rock Pigeon. On October, 2012, Chief Minister, Ms. Sheila Dikshit, to instigate sparrow conservation declared Sparrow as the State bird of Delhi. The aim was not only to commemorate the day but also to use it as a background for awaking the people of the methods of conserving sparrows and highlight the need of protecting the urban biodiversity in the process. The students of Women’s College of Patna distributed handbills on sparrow conservation to the public and scattered millets for sparrows.

Getting inspired from these steps, and in response to the need of conserving sparrows, Guwahati also had made attempts to conserve sparrows. The Early Birds Organizations have installed small cardboard houses cushioned with hay and scraps made of shoe boxes in the houses to help the sparrows in nesting. Also in their annual meetings on 5th may, they called on support for their cause and encouraged people to help the sparrows nest in their localities. But to achieve the ultimate goal, mass participation is required.

The Zoology department and Botany department of Handique College of Guwahati in collaboration planned to help the House sparrow to nest by building handmade Sparrow nests inside the college compound. The assignment was planned last year but is delaying since then due to lack of fund, involvement and several other technical difficulties. Also showing his disappointments, Malay Barua, the co founder of Early Birds Organisation says, “People are very reluctant in saving sparrows in guwahati, and they did not respond well to our programmes for sparrow conservation, but one day they will realize their importance and we hope that day comes soon.”

In the jungle of multistoried Air conditioned matchbox patterned buildings and sky piercing cell phone towers, House sparrows, are critically diminishing. Their chatters are getting scarce and the few twigged nests are vaguely seen. We’ve seen animals and birds getting extinct due to our ignorance, and it’s happening to the Sparrows to. All these leaves us to one question only. Will the saga of house sparrows become another Dodo story?

Rape Age – I believe as I see it