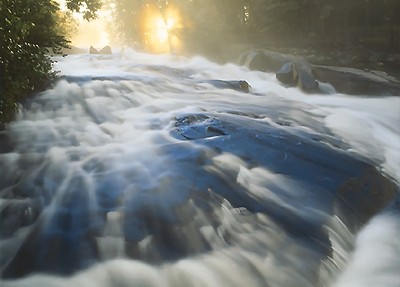 And then they all came back to me. One by one. Strung together in the same sequence… with the same pauses in between. The same sense of indulgence too. I wanted to cut off the call. I knew all of this by heart. Every syllable uttered; every intonated sound. It almost seemed like a déjà vu. Only it wasn’t. I listened until I grew to realise that something within was trembling, ready to break like a dam far beyond its pressure mark. It wasn’t a heart breaking this time; I don’t know what it was. Perhaps I heard my sanity breaking. Perhaps it was the clarity of thought that echoed like splintered glass. Or maybe, just maybe, it was the mere faith one had in rebuilding dreams. Whatever it was – it was cracking – into a dust shower. I listened to the sound and the voice simultaneously; all the while choking upon my own dry tears.
Gulping down lumps that arose out of nowhere, I smiled an uncanny smile into the vacant pitch darkness of the sky. Almost as if I needed to keep up a happy front to hide my own face. I don’t know from whom. After all he could not see me. He was after all at the other end of the phone call. Miles away. Yet I know he did. He saw every twitch before each cell in me grew still. The voice trailed on. And I wasn’t sure anymore. Those words, those word-filled silences…was it all gauging me? Or was he trying to gauge himself by letting it all out once more? Just once more?
Somewhere there was a breeze that was giving me a chill. Yet the windless night was suffocating every pore as I stood. The voice continued speaking while the throb within intensified. I stood listening. Hearing past it all. Until all I heard was the echo of words bounding against something somewhere within. Their thuds grew louder as he carried on until I could no longer discern what was growing hollow… the words or that wall within me.

Each syllable was so familiar. So frequently heard. Yet so crazily I yearned to hear them each time I knew it was him calling. But that was long ago. These words were addressed to a second person then. The one listening. Me. Today they resounded with a desperate force as if in dire need to break something. To flow free. They carried with them a sound I never noticed before. The sound of mockery;  the sound of final desertion.  Today after all they are meant for a third person. Her.
It took him three hesitant years to string out that eulogizing garland for me. And it took him just two official arranged visits under parental supervision to produce an exact replica for her. Were feelings that interchangeable? Or was I that substitutable? Was he just parroting verbatim something he felt was appropriate to address to the special one at any moment in his life. Or did he really feel all of that? The words kept up their steady pace. They pound on every wall of my being before dying out. The sound of weary ties snapping away one after the other continued. It was the sound of pent up emotions emptying themselves out… from both sides of the call perhaps.

Or maybe it was all emptiness really. I had died the day we parted. A death that took its own sweet time chiselling out tiny pieces of me minute by minute before I could even realise that I was all gone. Somewhere I believed he had died a little too. At least I liked to believe that he died a little on that day if not after. Today I am suddenly not so sure if I believed any such thing at all. As I let his voice hit that hollow spot in between my ears again and again, I wonder; was he really even alive enough to die a little ever? After all I wasn’t the first one in his life. I certainly wasn’t the last either. She will officially turn out to be THE one…so his family hopes. Something in me probed, did he hope so too?

He remains strangely silent on that. I never heard it in the words meant for me. And I don’t hear it in the words meant for her right now either. No wonder the words restring themselves like an oft played audio cassette. I know should he stop speaking abruptly, I will finish every sentence unsaid. So aware I was of these very phrases, these very expressions of his feelings. And my mind began to wander, looking into every recess of untendered memories, subconsciously trying to reach out to that first faceless one for whom this garland was strung. The more I knew him the less sure I had become of what I really knew of him. But this I did know. He did genuinely love her..that first faceless one. THE One who left leaving all but life behind for him. For me. For Her too perhaps.

He surely couldn’t read my errant mind at the moment. Or maybe he could. Maybe he was letting his own set on the same weary path, looking for the same old answers. Ones he perhaps had but never shared. Or maybe he did and I never saw what it all meant. Maybe I did but I didn’t want to see. He talked as if he has finally met his soul mate. But he sounded as if he is irrevocably lost in a wilder, more frightening abyss. How strange and yet how familiar that foreboding was. Flashes of our distance crossed my weary memory riddled head. These were the very words that drew us together. This was the very foreboding that drew us apart inch by inch until we knew that the gulf in between was far too wide to bridge down.

Hold my hand he whispered. I had unknowingly let myself go into a limbo half aware of what trailed to me through the phone. But now I snapped back. One last time meet me like in the old days and hold my hand he was saying. I did not understand. Yet I knew what he was saying. I heard what I needed to. What I shouldn’t have let him say. Or maybe I didn’t want to hear it and that was precisely why he said it all. I had lost track of the monologue in my own reverie. The call had begun with an urgency and an earnest desire to share new found happiness. The distant and yet so familiar voice was pleading now in a whisper that was fast dying out. Hold my hand just one last time and let it go. I need you to release me. Please do it one last time for me. For yourself.

I wasn’t sure anymore if it was a voice speaking from the other end of the line or from within my own turmoil. All I knew was that it was whimpering. Something in me wanted to cradle it like a little child in my arms and rock it to a comforting sleep. Something in me wanted to run away from it as fast as my soul could carry me. I was terrified. Torn. I wanted to hate with the utmost intensity I could ever be capable of. But I felt powerless; maimed. His words stung me. Yet they seemed to heal the rawest of my wounds. I wasn’t sure of what would come next; somewhere I didn’t want to know either.

Love they said could impair you. Love they said could take you down the fool’s route. Love was the ecstatic dope you didn’t mind indulging in never mind the horrible aftermath. To love was to become a willing victim of pain sometimes. Often a self destructive one. But then Love could be healing. To love was also to let go. I knew that He knew that. Only we also knew the execution was harder. He believed he had moved on. But did he? Could he? From the first faceless her to the so many to me and to her now? Did I really move on? Could I? From him? God be with you I heard myself saying. I know not who I wished it for. And that was the last thing I heard.

Something in me died again as I kept the receiver down. Or perhaps something awoke from a long dormant sleep. I instinctively reached out for solace to the skies; almost like a caged bird suddenly let out. My wings rusty and ruffled up from disuse, flapped awkwardly as a new deafening beat fill my ears. No it cannot be wings, I don’t have any. I am not a bird I remind myself. Suddenly I know what this sound is. It is my heart beat working itself up into a mad frenzy. Yes that’s just it. Plain mad frenzy. Beating for itself; beating for me. The breathlessness felt strangely liberating. So fetterless that it almost scared me. l strained my sight into the distance as far as I could and let a smile appear involuntarily on my face. The act of staring into the pitch darkness can be intensely blinding and yet the most soothing. Yet just as the euphoria begun, time reeled back. All I stood gaping at was the stark void…alone…

On being Romantically challenged by the Lone Ranger

The story of a single man turning thirty

A Research Scholar under Delhi University, Myra plays with both performing and literal forms to voice personal and socio-cultural issues.