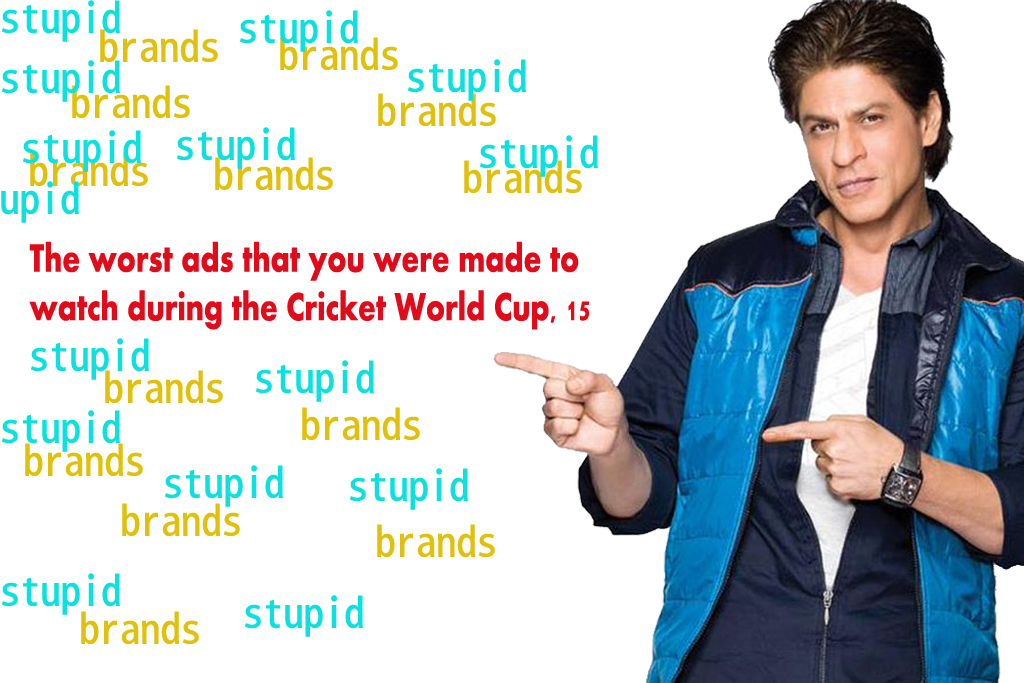 Well, India couldn’t grab the ‘mauka’ in CWC 2015, as people were predicting, and we hate it as much as you do. But you can’t deny or avoid the effect of the ‘mauka’ ad campaign. Funny, simple and very catchy, by the third game I actually waited for the next mauka ad to come on air. It’s a pity we couldn’t see India in the finals, otherwise I’m 100% sure that the ad would have been mind blowing as well. Who knows, I might start watching kabaddi just to watch the upcoming mauka campaign.

Talking of advertisements, during this world cup, we have seen some fantastic ad campaigns, some usual suspects and some very weird and horrible campaigns. While some of those ads had strange copies, some had bizarre unconnected visuals; and some lost the message somewhere during execution. During this edition of CWC, we saw the reincarnation of MDH uncle (it’s high time we include him somewhere in Masterchef, his presence might add some more viewers to this pure veg show), Irrfan Khan started following us from theatre halls asking us to change our habits ( as far as bulbs are concerned), Hema Malini started sounding like Dharam Paaji in the new Kent ad (Trying hard  to convince him to drink ‘shudh’ paani from Kent instead of the blood of poor doggies and kameenas), Dettol realized their folly, and pulled back the ‘Dettol ho’ campaign and surprisingly, none of the Cola giants came up with an interesting campaign (Well, IPL is always a better bet). Though I am not an advertising professional, but as an advertising student and a fellow viewer, who has sat through those torturous moments between overs, I am going to list down those 10 advertisements, which made my world cup viewing less enjoyable.

The thought behind the ad is ‘whatever the situation is, music should be on’. Agreed, great thought. But why on earth would that girl smash the cake on the boy’s face? What did the poor soul do? He was just singing his soul out (that’s another issue that his expressions were totally fake). If they are trying to say that cake-smashing is a situation, then the boy only should get up and dance. The girl creating a situation and then stating that music should be on is simply a paradox. On that note, let the music play…

Yeah, I know Amul TV spots have always been a distant fourth cousin of their print ads, but this one takes the cake… I mean ice cream. So, they have got a very angry Kriti Sanon (I guess this was shot pre-Heropanti) showing attitude to her boyfriend. Now the poor guy saw the Amul Ice cream cart, he asked her what she wants, again she snubbed him and looks away. He sat beside her, showed her one ice cream bar, she looked to her left; he showed another one, she looked up to avoid him, then he pokes her, she looks down to find 11 different flavored ice cream bars on the table. She becomes so happy that she drags all the eleven towards herself, smiles and nudges her boyfriend. Now the moral of the story is

“You can’t make a girl happy with one or two Amul ice cream bars, you need at least 11”

Now that we know that it takes 11 Amul ice cream bars to make a girl happy, why wouldn’t I buy a magnum, which is one-third the price of 11 Amul ice cream bars and tastes three times better than 11 of those put together. Also “consumption of 11 ice cream bars at a stretch is a sure shot cause of Influenza”. This statutory warning should be there in the ad. Plus there is a song going on at the background, which says “khilraheehai rang sabhi, you’re the one for me”. Which, basically means, umm… nothing…

So all Shahrukh Khan is trying to say that if you suit up and paint your walls in fluorescent blue, and put matching white modern furniture, your life will be HD, and if you like subtle grey in your walls, use antique furniture and not fond of wearing suits, your life is not HD. Genius…

Apart from talking in a sing song voice (I doubt that’s intentional), they also copied a line from Tata Tea ad campaign. The inter-cuts between the other girl and Rhea is neither appealing nor interesting. I did not even understand the need of so many frames in the frame. Dear art director, if you have thought that those frames actually added to the look, I’m sorry, those were visually very distracting (Please don’t be someone I’ve worked with)

What is the ad all about? Did anyone understand? Is it about the aunty coloring her hair purple? Is it about the dad being a stud in front of the girl’s classmates (whoever becomes a stud in a scooter?). Also such terrible copies “kabhi hausla udhaar lekar khudko surprise karo, kuch Alpha karo”, which translates into “Sometimes take some courage on loan and surprise yourself, do something alpha”. Now my question is what do they mean by ‘kuch alpha karo’? ‘Alpha Bano’ (be the alpha), would still have made sense. And please note, the hideous mascot just don’t use it from next time.

Another scooter ad, which just fails to make any sense. They are selling a scooter for ‘BOYS’, and they are proclaiming that they know ‘a boy’s life’ well enough. According to them, the boys do ‘khao-pio-khisko’ (eat, drink and run away without paying) and they also do disco at nights. I mean they are either generalizing boys, or putting their own boyish sentiments and spreading the wrong message to young people. Why would they khao-pio-khisko? If they have the money to buy your Bajaj Maestro, they can afford to pay for the food they are having. Just for the sake of rhyming, they are putting the art of copy-writing to shame. Maestro should get Baba Sehgal to write copies for them rather…

No, I am not making any comments about Virat and Anushka here. I am not even bothered that the girl has called him there in five minutes. Virat has always been in demand that way. But what is annoying in this ad the usage of Narain Karthikeyan. Firstly, why do we have to have a name plate for Narain, when we don’t have one for Virat? Do they think that people wont recognize Narain? Secondly, why do they have to intercut between both of them. Either show Narain or show Virat. You are selling tyres, focus on it bro…

It seems SRK is not doing any good ads this season. I guess he needs all these money to retain Yusuf Pathan. Talking about the ad, lets first ignore the repulsive ’70s background track (straight from Aradhana) that’s running behind. The ad says, “We create fresh fashion, so you look good, not for yourself, but for the person you love.” Excuse me! I want to look good for myself, you have any problem with that? It also says “To roz nikliye, ek taza hawa ki jhonke ki tarah, duniya ke liye nahin, par uske liye jo aapse pyar karta ho”. First of all, only people called Sameer can be ‘Taza hawa ka jhonka’, but besides that, what does it even mean? What were they smoking that day? I would not want to get out in fresh clothes everyday, I would rather wear things that I like, clothes what I’m comfortable in and not what others like…

Wlill Come to Tittooji later, but seriously? KKG? They couldn’t come up with any other term? That was good as a tagline, but a Khushiyon ki guarantee number? I am not happy with how the service guy looks, I won’t give you the KKG number, what would you do? Such vague thought.

Now Tittooji, so here is a man who suspects a guy is waiting for a stars number, he should ask him to leave directly right? No, he first praises his company, the company’s legacy, and then gives him his own card (Tittoo the star maker). So in a nutshell, he wants to make a star out of the AC service guy. Fantastic…

So you are telling to kids that, pretend to help your dad so that he gives you talk time in your phone. Are you for real? You are teaching them to be opportunists? In a society where morality and ethics are almost extinct? Rather than teaching kids to love their parents unconditionally, you are making them to put a price to show love. Not done Airtel! Seriously not done! [I could add that annoying back ground track about how ‘ek hazaron me mere papa’ is just adding to the insult, but the thought alone has made it the worst Airtel campaign ever]

Having said all of the above, I know what it takes to create an advertisement. I pity the agency guys, who have to come up with stuff under deadline pressure and irritating corporate clients. I know the struggle and I admire you guys for coming up with those ideas, day in and day out. But think about the people as well.  The lack of 66A, and the inspiration of Spider Jerusalem has finally got me to write an opinion piece on ads. You might not agree with me, but for sure cannot avoid this. Without these, I would have enjoyed my CWC 2015, much peacefully.

At the Stroke of Midnight

Of the photo-bug and how it killed curiosity