We had once carried an article on Paranormal tourism where we had contemplated on the various associations that tourism can attempt as in medical tourism, educational tourism, slum tourism etc etc not to mention the already existent religious tourism. What we are discussing today in our little space over here is not about tourism as such but rather the connection of mythology and the North East India. Every place has a mythological connect in its historical past.

The temples, local legends , monuments of a place usually acquaints one to it .

So does our own North East India have its own legends, mythological incidents and though the North East is often projected as a remote area with respect to mainland India, well, the Gods did not seem to think so and had been very generous with their presence in our mythological stories  and legends.

The many regions of Northeast India find mentions in our ancient religious manuscripts and also primarily in the Mahabharata ,which will be the mainstay of our article  today. Most of them have been passed down through generations in the form of popular folklore . A couple of them are famed all over India as for example the  genesis of the famous and important Shaktipith , the Kamakhya temple in Guwahati, Assam, atop the Nilachal hills while the rest needs to be shared.
So we would like to begin with this beautiful and heartwarming quote
“We the people of this region heartily welcome you to this beautiful land of seven sisters, well known for their richness of culture and heritage. Assam the land of blue hills and red rivers, is the land of Usha, who was enamored of Aniruddha, the prince of Dwarka. Meghalaya, abode of clouds was the dreamland of Pramila.  Arunachal, where the sun rises above the snow capped mountains, was the homeland of Rukmini whose beauty enchanted Lord Krishna. Manipur the dale of songs and dances was the land of Chitrangada and in Nagaland, the eastern sentinel of our country, Arjun’s Ulupi was born. Tripura is the land of Queen Tripura Sundari and the damsels of the blue mountains of Mizoram are as colourful as the river Dhaleswari herself…”
This  famous welcome speech by the then Chief Minister of Assam Sarat Chandra Sinha, on the occasion of laying of foundation stone by Prime Minister Indira Gandhi for the Kopili Hydro Electric project on 25th April , 1976 in Assam, sums it all that there is to it.
There has been proof of mongoloid and even pre mongoloids settlers in the north east even before the times of the Vedas and they were referred to as Kiratas in Yajurveda and Atharvaveda but we would like to remind you that though North Eastern regions found its mention in various folk and religious lore of Hindu mythology, the veracity as it happens in such cases, cannot be vouched for. They are just to be listened, awed, treasured as heritage and finally passed on to our next generation for onward transmission as a legacy. 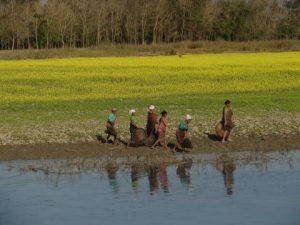 Assam–
Assam once known as Pragjyotishpur or the city of eastern lights ,was once and in fact still is , the gateway to the region and was founded by King Naraka  an Asura, an enemy of  Lord Krishna and the Devas. There is quite an interesting story narrating the origin of the roughly cutout  steps from the foothill of Nilachal hills  to the Kamakhya temple at the top , again whose origin is a famous myth lore in itself.
For the few who still do not know how the temple or the shaktipith came into being , it was when Lord Vishnu’s Chakra cut out the yoni or the  hip from the body of Sati Devi, the Mahadev’s consort who had self immolated herself, being unable to bear the insult to her husband by her father , Daksha and whose body the distraught Mahadev carried on his shoulder as a part of his mourning and grief. Lord Vishnu in order to alleviate his grief and to restore balance and sanity of Lord Shiva had sent his Sudershan chakra to unburden Mahadev of the body stealthily.
Coming back to the story about the  stairs, it goes such that once the Asura King Naraka came upon the Goddess Kamakhya and was completely enamored by her. He proposed marriage to the Devi and was quite persistent about it. The Goddess then relented on the condition that he built  steps from the bottom to the top of the hill to her temple, overnight and complete it before daylight. His workers worked furiously and it did seem he might succeed, when the Goddess sent the rooster to crow at the dawn. The marriage was finally averted and just in the nick of time too, for just a few steps remained to be built to completion. Till date we can see the remains of those incomplete stairs in the hill bearing a testimony to the legend that was passed on to us.
King Naraka’s son Bhagadatta finds mention in the Mahabharata  too, as being one of the participants in the Kurukshetra battle of Mahabharata heading a huge army of Kiratas.
Later Pragjyotishpur came to be known as Kamarupa and is mentioned in the Kalika Purana and the Vishnu Purana. Legend goes that it came by the name, after Kamadeva the God of Love was resurrected in the region, after being burnt to ashes by Lord Shiva.
After the death of Sati, Mahadeva went on to one of his famous trances. Sati was reborn as Goddess Parvati and Kamadeva in order to speed up their alliance had shot the cupid’s arrow at the Lord. This angered the Lord and in an instant he turned Kamadeva into ashes with his third eye. But later on, at Rati, Kamadeva’s wife’s prayers and requests he was granted pardon and resurrected. You can visit the Madan Kamdev temple in Guwahati which is said to be the spot where the above incident had taken place and is famous as the Khajuraho of the NorthEast India for its sculptures. 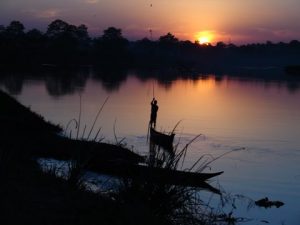 Sonitpur or the present day Tezpur , a beautiful town by the banks of the mighty Brahmaputra is steeped in mythology too. One of its ruler Banasura was an ally of the Asura King Naraka and was instrumental in the infamous Hara- Hari war or the war of the two Gods Shiva and Vishnu.
Usha was the beautiful daughter of Banasura and by a quirk of faith she developed a secret romantic liaison with Aniruddha, Lord Krishna’s grandson. Banasura who was a Lord Shiva devotee captured Aniruddha and what followed was the Hara- Hari war, but the creation was saved from doom by the intervention of Lord Brahma and differences were sorted out and the young lovers were united .
You can visit the Agni Garh , a fort in Tezpur which is said to be Princess Usha’s palace once upon a time and where the princess and prince Aniruddha used to have their secret rendezvous. 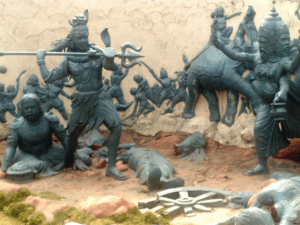 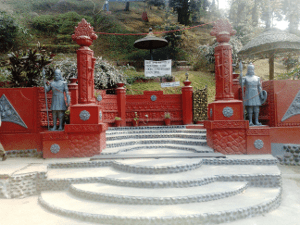 TEZPUR
or the Then Sonitpur
Arunachal Pradesh- 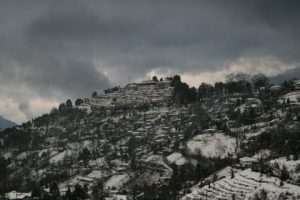 Arunachal Pradesh is said to be kingdom of the King Bhismaka , whose pretty daughter Princess Rukmini had eloped with Lord Krishna just on the day of her swayamvar and had resulted in a fierce battle between Lord Krishna and her brother Prince Rukma.
Again King  Bhaluka, who was slain by Lord Krishna , was also supposed to be from Western Arunachal.
Meghalaya:– 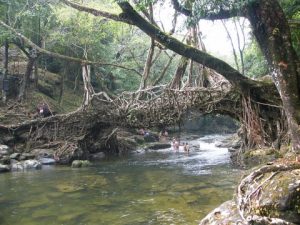 Meghalaya has been mentioned as Pramila kingdom in mythology and was a cursed land which was delivered from it when Arjun stepped feet on the kingdom after the Aswamedha Yagya.
It is said that Goddess Parvati had cursed the land to be such that the women folk remain devoid of  male partners,  which was then decreed to be freed of the curse only when Arjun would arrive in pursuit of the sacred horse of the Aswamedha yagya . Princess Pramila was sent to Hastinapur while Arjuna proceeded further on. She went on  to become one of the consorts of Arjuna later. 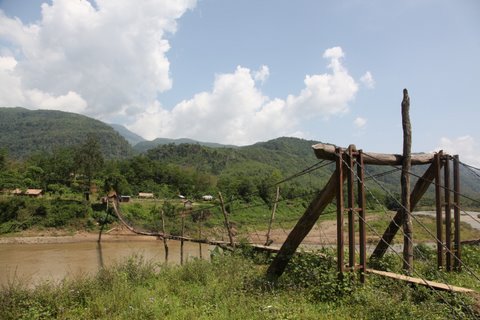 Manipur and Nagaland feature prominently in the Mahabharata, post the battle of Kurukshetra with Princess Chitrangada of Manipur and Princess of Uloopi. Their role was pivotal in delivering Arjuna from the curse of the Astavasus , who were angered by the manner Bhisma was killed by Arjuna in the battle. In order to save Arjuna from the curse it was necessary for Arjuna to die in the hands of his own son Vavruvahana  from Chitrangada, in a one to one fight, whom again Arjuna had failed to recognize as a part of the curse. Arjuna was  brought to life by Uloopi after the battle  and all was well that ended well.
Hidimba , Bheema’ wife is said to be a princess of the  Hidimb , now known as Dimapur in Nagaland. Their son Ghatotkocha figured in the Kurukshetra battle where he had a tragic end. It was on him that Karna had used the infallible and deadly Brahmashtra which he had saved for Arjuna. In a way it saved Arjun because if it had not been for Ghatotkacha, Arjun might have had to face Karna’s Brahmashtra. 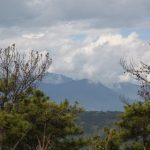 Tripura
The ancient name of Tripura was Kirata and it is claimed that they descended from Yayati , a chandravanshi one of whose descendants founded the kingdom . Tripura , a later  rogue king was slain by Lord Shiva, but his son Trilochana was a devout king and is said to have attended King Yudhisthira’s Rajasyuya Yagya as an ally.
So you can see that almost half of the legends of Mahabharata was centred around the region, and it proves that no matter what the differences are made out in the present scenario ,-physical, political and cultural , our roots are common and our association and relationship go long long back.
There is suspicion in the air, an air of derision, a distance among us, but who knows we might be brothers and sisters by descent.
Think about it this Dusshera and Durga Puja when you make your sacred offerings to the Goddess and the Lord to bless you and bless us all
Pic credits- Old file pictures from FE archives and Shahwar Hussain