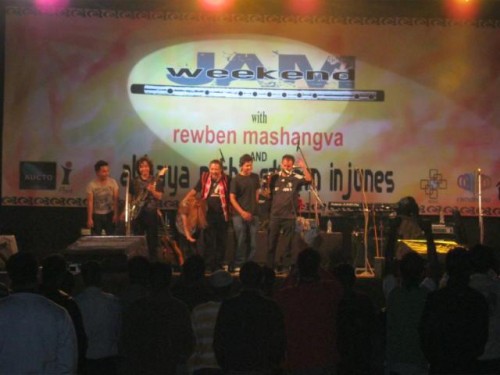 Weekend Jam- We can Jam! Two people, and their modest crew based in Guwahati, have taken an initiative to remedy this very predicament. Weekend Jam, a project launched by Vikram Gogoi of iMart (a division of iLogy Services & Solutions) and Rajib Kalita of Aucto Creations, is an effort to popularize folk music as well as talented musicians of the North East Indian region by organizing “musically educative folk music focused programs” each weekend in and around the city of Guwahati. The concept is simple: find an artist or band of the classical (which includes folk) genre, find another of any different genre, bring the artists or bands together at a venue and let them jam to create and serve as a program that is “uniquely educative and entertaining” to the audience. The concert itself is divided into three slots: the first two where each band or artist perform individually and the third where both bands jam together. The outcome however, is manifold. Previously lesser known artists and bands get an opportunity and a platform to showcase their talent, people looking for entertainment find a place where they get to listen to good music and most importantly folk music is given a makeover and made more appealing to the younger crowd, ensuring the preservation and promotion of folk music in the long run, besides building up as a prominent attraction for tourists looking at understanding and learning folk music in the coming years.

The pilot program of Weekend Jam was launched on November 20th, 2011 with a tribute to late Dr. Bhupen Hazarika where nine artists who had performed with the maestro himself sang Dr. Hazarika’s songs. This was followed by five more such concerts wherein twenty artists and bands from not only the North East region but also nationwide and even abroad participated and performed. With famous bands like “Afflatus” (all girls’ band from Shillong), “Abhaya & The Steam-injuns” (Nepal), “Guru Rewben Mashangva” (folk fusion band from Manipur), “Hasib Sepand” (folk band from Afghanistan) and “Lou Majaw and friends” (Shillong) performing alongside lesser known bands like “Trio” (classical troupe from Assam), “Blood Pressure” (Assam), “Bamboo Band” (Assam) and “Rain of Hearts” (folk rock band from Assam), it was an amalgamation of diverse genres to create something uniquely beautiful. The pilot program concluded on December 30th 2011, and was declared a raging success. The full fledged launch will take place on April 1st, 2012, and will include workshops and seminars for school students by performing artists to further enhance understanding of folk music, and also to generate more interest in the same.

Talking to Vikram Gogoi, I asked him how it all started and what led to the birth of Weekend Jam. Having shifted base from Delhi to Guwahati in late 2010, Vikram had founded his company “i” and launched his first program called “Just Madness” for the radio channel “Ooo La La”. It was around this time when he came in contact with Mr Rajib Kalita, otherwise known as Rana in the music fraternity, while planning an event for New Year’s eve 2010. In 2011, Vikram and a few fellow musicians got together to form a fusion band called “A U M” where he filled the place of the bassist. It was while looking for gigs for the band that he realized that there was indeed no viable platform to showcase new talent in the North East. Hence germinated the intent to tap and promote hidden talent, and give such bands and artists an opportunity to showcase their abilities. Vikram ran his idea by Rajib Kalita who has been working on uplifting the musicians and artists of North East India region for over a decade. He in turn expressed his agreement, and what followed was months of planning and preparation that culminated in Weekend Jam.

The shows in the pilot program were promoted by word of mouth only and were self-sponsored. Even though the first two concerts had less than satisfactory response, the rest of the concerts were held in front of a jam-packed audience.

The essence behind Weekend Jam being fusion, I ask Vikram how it was any different from the popular Coke Studio and the more recent Dewarists. “This is not a studio program”, Vikram replies, “this is a full fledged concert where in we open the performances to public, and it doubles up as a television program”. Furthermore, Weekend Jam has a deep-rooted objective of not just uplifting folk music and musical abilities but also to create a musically inclined practical learning environment and to create career opportunities in the field of music. “The idea is to develop Guwahati as the folk musical hub of India by 2018.” Vikram says, “What Mumbai is to commercial music, Guwahati should be to folk music”. Vikram is confident that the objective is quite achievable, given that all the people involved have two things in common: a passion for music and a commitment for lifetime. They call themselves, “a bunch of lunatics just looking for the light at the end of the tunnel” in jest, but from what it looks like so far, Weekend Jam is a one of a kind initiative, and we at Fried Eye wish it all the success come April.

You can visit the Facebook page of Weekend Jam at https://www.facebook.com/pages/Weekend-Jam/230610343678330 for updates and videos of the concerts.

Music For Your Valentine