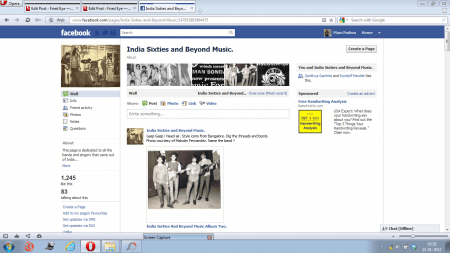 India Sixties and beyond music.

The sixties was an eventful time. The decade was marked with the success of the first man on space – Yuri Gagarin. It was the period of emergence of Che Guevara, John F Kennedy, Martin Luther King Jr and their tragic deaths. Of the most severe and deadliest earthquake recorded in the recent times- The great Chilean earthquake ; Of cultural revolutions and social upheavals;of the rise of feminism and gay rights. Yes, the period was aptly called the Swinging sixties. It was in the sixties when a cultural revolution of sorts was noted in India when Beatles sang Norwegian wood,  a raga rock, inspired by Ravi Shankar and rise of some talented beat groups in the mid sixties like the Mystiks, Flintstones etc. What started back then with small baby steps is now an altogether snazzy scene in itself. But in the razzle dazzle of todays music scenario many youngsters have lost the connecting threads of history to our glorious times of the sixties and seventies. India sixties and beyond music is one such initiative that deserves applause in large measure for its attempts to preserve and promote those moments from history when the rock music industry was trying to carve a place for itself  and its future musicians  . And the promising scenario that it now boasts of is in fact due to the strong foundation that founders such as late Amit Saigal, editor of Rock Street Journal and magazines like Junior Statesman had built up back then. India Sixties and beyond music is a facebook fan page started by Joseph Pereira, a journalist, music enthusiast, musician, music historian and author of books like Legends of Golden Venus. Indian by origin and now based in Singapore, Pereira had always been fascinated with Indian rock scene, an interest fueled by stories narrated to him by his cousin brother about the Indian music scene back in the sixties and probably that was when the germ of an idea for the fan page was formed. The memorabilia and information that the fan page boasts of in its archive is truly a treasure house. Fried Eye had the opportunity of interacting with the innovative Mr Pereira which we are sharing with you today as a part of our theme Music – A broader perspective.

FE- India sixties and beyond music- how would you describe it? A hobby? A passion ? a commitment? A project? Or everything ?

JP- It is to give Indians a sense of pride in their music scene. To let them know it is coming close to half century now. The bands and singers that started out in the early sixties and onwards into the seventies, eighties, nineties, and the first twelve years of this decade. Each generation gets inspired by those who came before them. Even the present generation take their cues from the Western scene. But surely they must have been aware of Indian musicians who have come before them and performed and recorded. They have added to the scene.

FE-You have mentioned in interviews of being fascinated by the music scene of India in the sixties. What exactly was the clinching point or the deciding factor that made you go ahead and form the fan page ?

JP- I knew there were blogs and other pages on the Net. I have seen them and I just decided to start one and add to it.

FE-What can a fan expect from the page?

JP- Initially we started with the page with visuals and links to songs that are on the Net. Then I set about building up data on the bands and singers. That will take a lot of work as I try to make contacts with musicians and get their stories down. Then we also mention current happenings when we hear about it especially if it is mentioned on the Net. I cannot compete with Rock Street Journal and the mainstream dailies. We just add another channel. Hopefully it builds. FE-The normal course of action is a website leading to a fan page but here, you have started out on facebook first. You plan to chronicle a book on those lines too. Do you have any future plans of a website catering to a greater audience on this theme?

JP- Books will be done by other scholars and researchers. I am just trying to create excitement and awareness. Think of the Western scene where even stalwarts of eons ago like Beatles and Rolling Stones are dissected. We try to do similar for the Indian scene.

JP-No selection criteria. Initially I started the page titled India Sixties Music. Then Radha Thomas who sang with Human Bondage in the sixties suggested opening it up to include music that came later all the way to the present. I agreed to that and we changed the title to India Sixties And Beyond Music.

FE-Is India sixties and beyond music a one man show ? (other than the fans of course)

JP- Yes it is. It is one man now. But I have many mentors and friends who encourage and give help. I am grateful to them. I have also made many friends in India because of this site and I think that is wonderful.

FE-What I meant to ask was is there any other person officially on the team other than yourself? And If somebody wanted to volunteer to be on the team…

– I would welcome additions to the team because one single person could not possibly cover the entire Indian music scene.

FE-What were the challenges that you had faced on the project? Information? Manpower? Finances? Response from the people in general? Cynicism?

JP- Initially information. Because I am quite remote being in Singapore. But the net is a great help and there is much information on the Net and music on You Tube. I have made contact with a German who has an amazing blog titled www.hindustanivinyl.com

He made contact and made available some rare recordings on the blog. He sells Indian records but has been generous enough to share songs by artistes like Cavaliers, Raja Andrews And The Nawabs, Savages, Usha Iyer etc

Manpower is not a problem unless it grows really big. It is doable for now. The challenge is to keep it going. The response has been encouraging. I have had comments like “About time” and “More please”. Discussion about bands and music would be great to keep dialogue going. Then there have been people asking for information on a particular act and that gets me going finding information. I don’t really detect cynicism yet. It will come though. FE-Any legacy if not passed down to the next generation becomes lost in history. And the gen next is a restless , inquisitive lot. How do you plan to involve them and hold their interest? What newer things can we expect from the page?

JP-Your first statement holds true. Once it gets too remote it loses touch. That is when it diminishes and vanishes in the mists of time. Capture it, documents it and then pass it on. More discussion, more suggestions and perhaps give the young generation a desire to be a journeyman musician. Musicians are called I think. Like people of the cloth, medicine, law, journalism. You cannot explain why.

FE-Fascination seems the primary response you had for India sixties music scene. Now that you have reached out, collected memorabilia, extracted data, observed and discussed about it, add to it you have done a similar project on the Singapore music scene of the sixties, a musician yourself-could we have a detailed dissection about the India sixties and seventies music scene? How different is the present scenario from the times back then?

JP- In the present days resources abound. In the old days meaning the sixties people learned to make do. For example, India had an import ban on music equipment and instruments. This resulted in people in bands resorting to home made amplification or amps made locally. But it created an opportunity for home grown luthiers to practise their craft. Meaning made in India instruments. Before the electric bass made their appearance, six string guitars were used in which the designated bass players played bass riffs. Of course they sounded tinny. Because they did not have the requisite bottom. In spite of handicaps like the above mentioned the bands persisted. Records were hard to come by and there was much sharing. In those desperate circumstances creation was all the more precious and remembered in that back drop becomes more poignant.

Hearts were big then and desire desperate. I needed to be in a band, I will sell my soul to learn an instrument. These are just touchpoints. I will need many hours and many lines in order to dissect the scene in a question. That is what the site is for. To do that. Dissect the scene ad nauseam. Out of that comes understanding and lessons for the present.

FE -Can we expect a bigger picture in the future? Like the general all encompassing Music scenario of the world? A kind of database, archives of the evolution of western music since the early twentieth century?( I ask this because in one of your comment thread in facebook, I read someone, a student of music I think expressing the need for one as there was hardly any organised content regarding this)

– That would be nearly impossible. At best one could do countries. Even a sub continent like India with over a billion people would theoretically have a huge scene. Look at the different states in India all having their own scene. Geographically it is wide. To cover it in depth requires work and resources and time. Best to start with a smaller area defined by time. Like India Sixties and focus on that. Another expert on India Seventies, another on India Eighties, another on India Nineties and so forth. Then cover it thoroughly. The resources are there and it is easier to reach out. But a World Database is a nearly impossible scenario. Lofty but impossible.

Well Mr Pereira certainly have overcome two humongous tasks that he had set out to do. (He has done similar research on the Singapore Music scene too) and though he humbly states that it is near impossible to create a world database, seeing his determination and dedication, it will not be surprising to see him exactly do that. At least our best wishes are certainly with him.

Weekend Jam- We can Jam!