From Ether to here. – A conversation with the Bengali rock band Ether

There is a certain layer in the atmosphere beyond which all sound vanishes; where all earthly sounds are no longer heard. That space, right there, is the perfect symbolism of nothingness. And that, apparently, is the inspiration behind the name of the first ever rap-rock Bengali band “Ether”, who would like to believe that their music originates from that very point, and pervades through that ether to reach us . Starting from near nothing in 2004, the band has today indeed reached out to a huge mass of avid listeners, creating music that is both refreshing and unique. 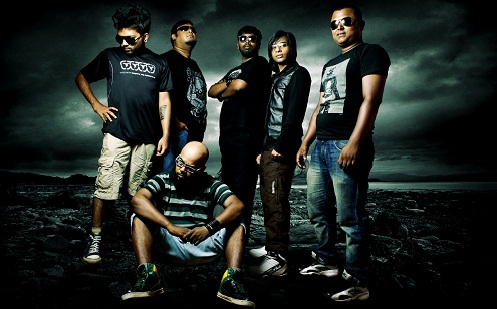 Having been brought up on a steady diet of Bengali rock music, my attention was naturally piqued when I saw a video being posted online with the caption, “First Bengali band on MTV”. As it happens, the video turned out to be “Ami”, performed by Siliguri-based band Ether, and it was featured on MTV Roots recently on the 6th of July. One thing led to another, and before I knew it, I found myself in their Myspace page, giving listen after listen to the tracks from their debut album “Mone Hoy”. That’s when I knew I simply had to know the band better; that I had to try and find out what moved them to make music as catchy as this.

The band started out in 2004 with six members who loved to casually jam, more in the likes of a garage band than anything else. While initially they played covers of Bryan Adams, Deep Purple, Guns and Roses, within a year’s time, they were composing their own songs. Their first ever song, “Swadhinatar Mantra” (which literally translates to Slogan of Freedom) was composed by vocalist Mallar Roy. The song, which later found its way into their debut album, is a soulful melody about finding the right key to set oneself free, be it from addiction or oneself at times, and is quite different from the rest of the songs in the album.

The band, right from its inception, had set out to do “something different” with their sound, and inspiration came in the form of famous American rock band Linkin Park. While listening to quite a lot of Linkin Park, they came up with the idea of incorporating rap with Bengali rock, creating something unique in the process; something which had never been done before. In 2006, the band appointed rapper Pushpal, who brought a whole new dimension to the band’s sound. Pushpal, who was previously into DJ-ing, added his vast knowledge of turntables and techno elements to the already existing sound base of the band, and that led to Ether’s sound taking the form that it has today: that of the Nu Age genre.

In 2007 and 2008, the band busied itself with promoting band music and uplifting junior bands in and around Siliguri by holding “Rock Thek” and “Summer Jam” respectively, in association with two other bands from Siliguri. Many senior bands, mainly from Kolkata were invited to be a part of these events. It was in 2009 that the band started working earnestly, only to fall apart in 2010, when other commitments like work and studies came in their way of following their passion. But then, after a year and a change in the band line-up, the band was back in 2011 with the proverbial bang, this time raring to give their first album a get-set-go. Spurred into seriousness, this time with the dream of an album looming in the distance, Ether started with the recording of the song “Ami”. The recording was incidentally done in a home studio, and it was rapper Pushpal who did all the arrangements for the song.

The entire recording of the album, which took place in Little Wings Studio in Siliguri itself, took three months. Finally, on 7th of January 2012, Ether released their first album “Mone Hoy” under the record label of Raga Music from Kolkata. The press release, which was held in Calcutta Press Club, was attended by famed Siddhartha Ray (Sidhu) of Cactus. If the recent MTV related fame is anything to go by, the album seems to have made its mark in the rock scenario in just about six months’ time.

The album itself is a compilation of six tracks, and each track “has its individual identity”, to quote the band. “Swadhinatar Mantra”, as mentioned before, is more on the slow rock side with the piano being the main element and at times sounds almost jazzy. And while “Swadhinatar Mantra” doesn’t involve rap, “Tritio” hits it high with the rap and the extensive techno elements. One can make out the definite Linkin Park influence in this song, with a hint of a metal core and an interlude that really knits everything together. The title track “Mone Hoy”, which happens to be my favorite track, is quite distinctive for its signature riff that keeps playing in the background all throughout the song. “Uttoron”, my next favorite song, has a brilliant intro with its slow start and a gradual build-up (experienced best with ear-phones as the sound shifts trance-like from left to right and back again) is what made me listen to it quite a number of times. “Abalamban” does quite a nice job of blending the vocals along with the music (whether intentional or otherwise) to make it sound almost shoegaze like, and is set apart from the rest of the songs in its own way. Which finally leaves “Ami”, an epitome of everything that Ether sets out to achieve: a unique sound incorporating rock and rap that is typical only of Ether.

On being asked about how Ether’s sound is different from that of Linkin Park, lead guitarist Pupun (who incidentally has a previous album called “Letters From Siliguri” under his belt) pointed out that the lead guitar plays a much more significant role in Ether’s sound than in Linkin Park, and also that Ether’s sound has hints of sentimental elements and sometimes even jazz that Linkin Park doesn’t. The lyrics of the songs, being written by the band members themselves, ring close to the heart, adding to the sentimental feel of the songs. In fact, the lyrics of the title song, “Mone Hoy” is an almost heartbreaking rendition inspired by the life of one of their own band members.

So how is a song born, I ask, to which Pupun says that most of the times it is the tune which comes first, which is then hummed out and given form, and then later filled in with lyrics to create the song it its entirety. Sometimes though, the reverse also happens, and a suitable tune is created to be molded into already existing lyrics. How would they want their audience to feel on listening to their music then, I pipe in again, and Pupun laughs and says it is quite difficult to give an answer to that. He ends up admitting, “We are a bunch of six tremendously crazy guys. I guess we just want our audience to get crazier than us”. One of their favorite gigs happens to their recent one in Siliguri Polytechnic College. “The crowd was awesome”, Pupun says. If listening to the recorded versions can make me feel this way, I can only imagine how their live performances would drive a young crowd into frenzy, and testimony is the sheer number of messages on their Facebook page from fans applauding their performances and their music. Kudos to band and PR manager Amlan, who is also their lead guitarist for taking care of entire marketing and public relations for Ether, and catapulting them to the fame they enjoy today.

So what can one expect from Ether in the near future? A second album definitely, maybe sometime in the next year or the year after that. The band in fact has already started working on it. Having originated in a low-key city like Siliguri, which is more known as a gateway to more glamorous places like Darjeeling and Sikkim, Ether has come a long way from being a garage band jamming for fun, to being the first ever Bengali band to be featured on MTV. Fried Eye wishes Ether all the success in the future, and wishes that the band continues to create beautiful music for years to come.

The band line-up is as follows:

Listen to the entire album “Mone Hoy” at: