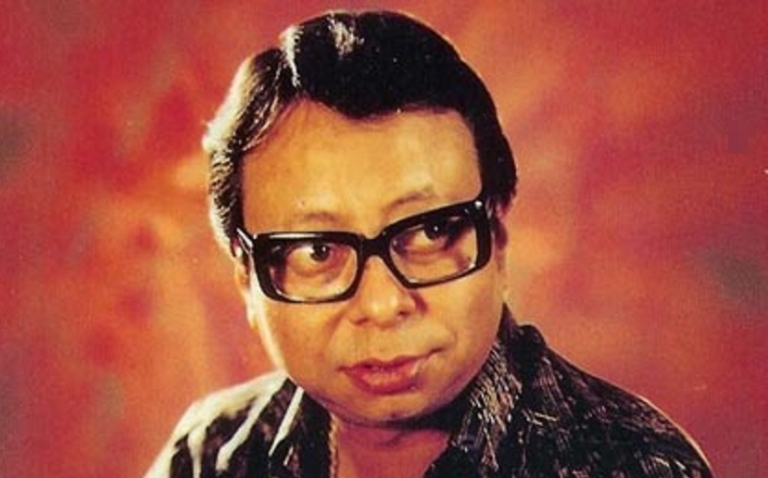 The top 10 from RD Burman

And so I am experiencing my toughest moments choosing the top ten RD Burman tracks, which is my assignment for this edition of Fried Eye. Choosing my ten favorites out of them is a probable solution (and the obvious) too, but what about the guilt of not picking the other ones? That almost amounts to sacrilege.

To say RD Burman was a genius would be a gross understatement. He is a legend and attributing to his legend status , there are many interesting stories about why he is also called Pancham. Some say he as a toddler used to cry in the fifth or pancham note- Pa, while others say he used to be proficient as a young kid in five different notes. Whatever  the true story of the nomenclature of the legend might be, his musical brilliance shone right from his childhood days. Being the son of another legend SD Burman helped probably to nurture his talent.

Coming back to my assignment, every creative genius has a style or genre of his/her expertise which is a signature style of the maestro. For eg, if you say A R Rehman , you can easily connect him to a special style or sub genre, or even in the world of literature, Dickens brought images of the London and England of the Victorian era. But RD Burman has versatility as his strongest point. If he could shake us out of our inertia with Monika my darling , there is the sedate and deep Mera Kuch Saaman from Izaazat. If there is the Mehbooba number from Sholay, we also have the dual experimentation of Humein tumse pyar kitna from Kudrat , So on what basis do I choose my choices, because I love the Mehbooba number and so do I love the Mera Kuch Samaan number. I think for a best overview of RD Burman’s musical journey, one should go for the collection of Gulzaar Saab with some lovely anecdotes. But yes I will attempt one for sure. Why shouldn’t I ? As a  die hard fan of his, I have the right I guess. It’s just that I do some amount of justice to his musical brilliance while attempting the list. My list in no way is an indication of his best numbers because there is no best of the best. I have just attempted to bring out those numbers which had made a lasting impact on many youngsters like me, who back then used to try finding deeper meanings in songs; find our alter egos in the lyrics and music, but let’s leave the psychology now and embark on our musical journey.

Dum Maaru Dum from Hare Rama Hare Krishna and Mehbooba Mehbooba from Sholay are almost iconic in their status. These two numbers almost brought a new wave of new sounds. While Mehbooba had Arabic influence Dum Maro Dum was all about the Hippi wave. It naturally is one of the noteworthy compositions of RD Burman. But of the two I would prefer Mehbooba in the list for its use of unique and different sounds like the blowing in a bottle sound in the beginning of the song.

Remember RD Burman singing out Monica my darling? The phrase is almost synonymous to the name RD Burman. RD Burman had given his voice in another number Sapna Mera Toot Gaya. Both had Asha Bhosle as the lead voice while RD Burman had his voice for added effects. I prefer Sapna Mera in my list for its soulful melody and more of RD.

Aaja Aaja is still a hot favorite for shaking a leg literally at discotheques and parties. The unmistakably peppy twist beat can even shake the non believers into action. While Ek Tu Aur Ek Mein is just a cheerful sweet number which has some interesting rhythm. Though not a dancer’s regular beat, I love it for the challenging yet lively beat to shake a leg.

Asha Bhosle, RD Burman’s wife, had always been a constant presence in his both life and songs. Their combination had been an electrifying one and he is credited for bringing out the best from her. But there are few numbers where Lata Mangeshkar had lent her voice. Is Mod Pe Jaate Hain as a soft romantic duet is a favorite even today. But I would like Tere Liye Palkain Ke Jhaalar Bunu from Harjayee, a Lata solo for my list for its strikingly melodious notes and some interesting sounds in the song. It is not much well known and I would undertake it as my duty to let the world know about it.

I used to love those songs, usually the romantic duets which used to have an outdoor effect; the echo effect. You could literally visualise the hero and heroine taking a lazy stroll or running between the trees in slow motion gliding happily to the songs like Yeh Wada Raha and Mausam Pyar Ka from the movie Sitamgar. Of the two I rate Mausam Pyar Ka better for its no rush- lazy daisy – just perfect for a beautiful weather of love.

Then there used to be some macho – total guy songs; rough, loud and full of energy. You can almost see the expressions in your mind when you hear them- teeth-baring in naughty grins. Dhanno Ki Aankhon Mein from Vidhaata rates highest in this sub genre. And I can’t dispute that. But personally Pyar Humein Kis Mod Pe from Satte Pe Satta would be one of my favorites for its changing tempos. From slow lethargic to fast energetic the change is mind blowing, not to mention the contrasting pitches in the chorus.

By mid eighties RD’s popularity had begun to wane with directors moving on to Laxmikant Pyarelal duo. But after his demise two movies released with his composed music – 1942 A Love Story and Parinda. Both received great acclaim with 1942 being the greater hit. I have however a softer corner for Parinda and Pyar Ke Mod being a song after my own heart.

Kishore Kumar had sung fabulous numbers for RD Burman in Amar Prem, Kudrat and both were picturised on Rajesh Khanna. But nothing can beat O Majhi Re from Kinara in depth and soul. He had used brilliant musical effects to give the feel of a song sung in a boat in a river.

And then in the eighties the disco scene had taken Bollywood by storm. RD Burman had tried his hand in the genre in Sanam Tere Kasaam and Zamane Ko Dikhaana Hai. While the song was a big hit the film bombed. But whatever the case maybe Zamane Ko Dikhana Hai has some outstanding numbers with Hoga Tumse Pyara Kaun topping them.

And of course who can forget the magic of Gulzaar Saab’s lyrics and RD Burman music? With RD’s music Gulzaar’s poetry found a flow, a rhythm and the music found its soul in the lyrics. Both complimented perfectly each other. Here as an example I am posting two songs. The first is Mera Kuch Saamaan from Izaazat which is quite well known among music lovers. As a friend told me, this song is a sort of benchmark to know the taste of a true music aficionado. The other is a lesser talked about but undoubtedly beautiful number Roz Roz Ankhon Tale from Jeeva. This is one song which grips your attention the first time you listen to it. So I know that makes it eleven choices rather than ten, but one extra would be rewarding to anybody who loves and swears by RD Burman’s music.