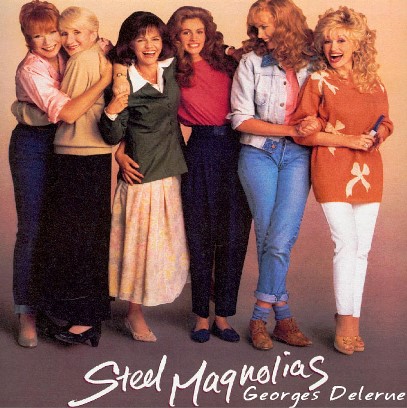 THE STEEL MAGNOLIAS – A MOVIE REVIEW

The playwright Robert Harling in his play ‘The Steel Magnolias’ very beautifully combined femininity and strength, but when in the year 1989 it was made into a movie nobody knew that it would achieve a cult status.  With the cast of Sally Field, Shirley MacLaine, Dolly Parton, Daryl Hannah, Olympia Dukakis and Julia Roberts the movie achieved an another level altogether .

It is needless to say that the movie is completely drenched in the colors of emotions. Sally Field potrays a family woman , who loves her daughter more than anything in the world;Olympia Dukakis plays a rich woman who loves to hangout with her friends and be a part of their good and bad times;Dolly Parton plays a salon owner who is mostly the hostess for all the ladies meet, however her character  is soaked in  some kind of peace , charm and stability.

The star attraction is Shirley Maclaine; she crossed the zenith of eccentricity in playing her role and her overpowering persona is very much visible when one watches the film. The protagonist of the movie is Julia Roberts and this role fetched her an Oscar nomination and a Golden Globe win for the best actress in a supporting role. She becomes a  focal point of the film when her character (Shelby Eatenton Latcherie ) dies with diabetes. It was a ground breaking success not only in terms of acting perfectionism but also a successful experiment of a great ensemble cast.

There are  moments in the film that shake you to the core -when Julia gets a diabetic  attack in the saloon and all the women folk help her on their very personnel level ; another moment is at the graveyard when every body is sympathizing with Sally Field and she suddenly  lets out her frustration portraying the agony of a mother for her deceased child. The film is a potpourri of emotions , expressions and surprises. One has to struggle to put this kind of perfect cinema into a kind.

Overall a worth watching movie for all ages , it makes you realize, that happiness and sorrow are the two sides of the same coin and one can’t escape what one has to face, but whatever happens the life goes on , that’s a very basic fundamental to happiness and to cherish what you have.