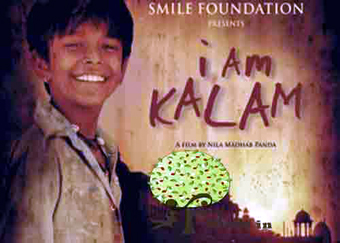 “There are no seven wonders of the world in the eyes of a child, there are seven  million.”    —       Walt Streightiff

‘I Am Kalam’ is an intensely inspiring movie enlightening the indomitable potential of dreams through the lenses of a child.

Released in the Indian screens on 5th August 2011 and critiqued over reputed international film festivals, this movie has been produced by Smile Foundation as an initiative to disseminate the importance of education for the underprivileged.

Winner of  “Heroism in cinematography” award 2003 ,the debutant director of ‘ I am Kalam’, Nila Madab Panda, has been highly acclaimed for over 65 documentaries and shortfilms. He wanted the audience to grab the essence of a movie that is plain and doesn’t turn out to be preachy.

‘I am Kalam’ is a story of a poor child named Chotu (Harsh Mayar) of Rajasthan who  gets inspired after watching the former President APJ Abdul Kalam delivering a speech on children’s education but cannot aspire to fulfill his education due to poverty.Reincarnating himself as Kalam, chotu struggles to change his destiny after he comes to know that the erstwhile President had worked as a newspaper boy once to finance his own studies.

Sanjay Chauhan’s moving script has been able to override many obstacles in the film, to bring out  the talented performance by Harsh Mayar, a Delhi slum kid in reality, who happens to be the strongest fibre in the film.

Having  won the 58th National Award ( best child artist) for this film, Harsh Mayar becomes a representative of children who believe effort is more powerful than fate.

Shot at Rajasthan and Delhi, Chotu works at a dhaba in the movie and dreams to make it big someday. There is also another character at the dhaba, Laptan (Pitobash) who idolizes Amitabh Bachchan and dreams about becoming a star.

‘I Am Kalam’ transcends the melodramatic commercial drama films. The cinematography by Mohana Krishna has contributed extraordinary camera angles that are distinctly pleasing. Although movies like this, appeal only to a particular audience, the subject matter has taken it to greater glories from winning the best feature film  at Lucas International Film Festival , Frankfurt 2010 to  many more inside and outside the country.

Most of the creative cast and crew  in ‘I am Kalam’ are newcomers. For a film shot on a shoestring budget, this movie has done a brilliant job ,kudos to Mohana Krishna’s cinematography of the colours of  ‘kesariya balam aaonee, padharonee mahde des‘.

Susmit Bose has captured the music for this film. Hussan Saad , a child artist playing Ranvijay, the privileged one in the film throws light on class differences within the conservative structures of Rajasthan. His childhood experiences with Chotu is a poignant reminder of  a rare unrequited friendship.

This film is an illustration of how a simple storytelling can sculpture the gift of learning while giving  the public ,  spaces for speculating the young world around them.  I am Kalam leaves you reminiscent of the lines of Bhati Mama acted by Gulshan Grover: “There  are some people who live in a dream world,  there are some who face reality; And there are those who turn one into the other”