Hangovers, all of us will agree, are something that tends to leave behind quite a headache and sometimes more. And trouble could just increase if you are struck by some forbidden beauty, especially if you are a married man. ‘Raat Gayi Baat Gayi?’ takes you through one such situation in a rather light hearted manner. And it is complete with Indian sensibilities. So much that it is quite predictable actually. But then it is enjoyable at the same time.

Rahul (Rajat Kapoor) wakes up at his house after getting drunk at a party the previous night and all he remembers is he was with another women Sophia. His memory fails when he tries to remember what he may have done with Sophia. And when he figures out that his wife is so angry that she prefers not talking to him he is really worried. Here on starts his efforts to know what had happened. And in the process he sees his close friend Amit (Vinay Pathak) thrown out of his face and also the true face of another friend Saxena (Dalip Tahil) revealed. 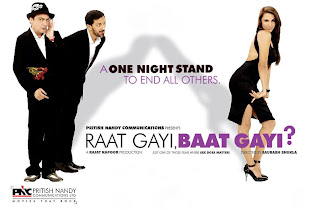 ‘Raat Gayi Baat Gayi?’ does not really have a story in the sense that it does not have a beginning, middle and an end. The film completely stands on the screenplay penned by Saurabh Shukla and Rajat Kapoor. Also the dialogues work wonders, especially the one-liners which keep you smiling if not breaking into occasional laughs! Technically too the film comes clean on edits and the way it is shot.

Rajat Kapoor comes up with one more of his cool performances which is matched by Neha Dhupia’s sensuous appeal. The actress has in fact grown such extents that it would be hard to find in her the actress who did films like Julie. Vinay Pathak too comes alive after a long time. Iravati Harshe proves her stage credentials and Ranvir Shorey’s tiny appearance, where he is aptly names ‘Gags’ gives you all the laughs!

Overall, ‘Raat Gayi Baat Gayi?’ is one movie which proves that it’s how you tell a story than the story itself that is interesting. With the deftness shown by the writers and director in their respective jobs, RGBG stands out as one movie which would really like to watch on any night.

Review: Accident on Hill Road
as the River flows : A Prologue