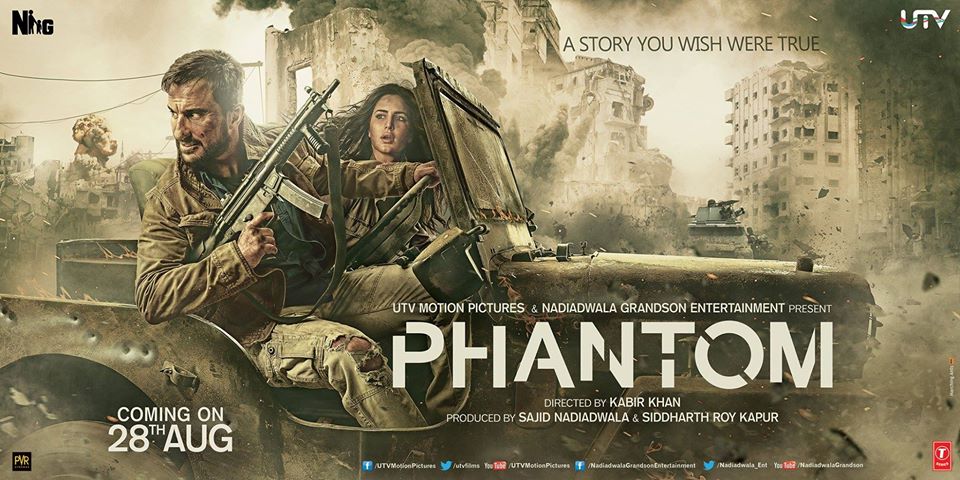 It is funny how certain films can remind of certain others. Phantom is one of those. From the word go there are similarities that will keep taking you back to some other films.  Of course that should not be a commentary on the capabilities of Kabir Khan as a director. He after all has given us some pretty interesting films in the past. And neither does this raise a doubt about Phantom’s capacity to keep you entertained.

It is a fairly decent watch actually for anyone who is looking for a package of everything. Except an item number! That’s one thing mercifully absent from this mixture. So you do not have a random female gyrating along with the hero in a bar for no purpose. This apart you might be glad to find some humour, some action, some romance, some drama… a healthy cocktail. And yet, that precisely could be the reason why Phantom remains ‘decent’ and not ‘awesome’. For a spy thriller, Phantom rather lacks some sheen. And it lacks enough action.

Based on a premises of India hitting back at terrorist with surgical attacks on the accused behind the 26/11 Mumbai attacks, Phantom has a shamed ex-military personnel recruited by the RAW and sent out for a mission. The man, Daniyal Khan, is played by Saif Ali Khan and he has help at hand in form of Nawaz Mistry (Katrina Kaif). What ensue are sequences when Daniyal takes out people in London, Chicago, Syria and Pakistan. Among these is a kickass sequence of Khan executing James Coleman Headley – complete with reference of how some other spy networks have worked similar stunts in the past. Kabir Khan and his writer get the functioning of a terrorist network pretty well. However you are left wishing for more as the story sprints by, backed by razor sharp edits. The first half of the film at least moves at light speed.

The casting appears perfect on paper. On screen is another story altogether. Saif Ali Khan looks uncomfortable. He has a scorn on his face all through, as if someone asked him to wear wet socks. Katrina continues to believe that batting eyelids equals emoting. While Saif is unforgivable, Katrina I could totally condone. The fact that she looks a million dollars in every frame is good enough for me.

Also good is the way the Aseem Mishra captures the locations in his camera.  He manages to add much to the story with his shots. Also aiding him in this is are his production designers from various places. Especially for his scenes set in Syria and Pakistan.

Kabir Khan should manage to make people emotional enough with his references to the 26/11 Mumbai attacks and how it left us bleeding and shamed.  There will be enough moments when you might find people around you clap, and probably even whistle. But as you walk out the theater there will be hardly anything that you carry out. It won’t stay with you.